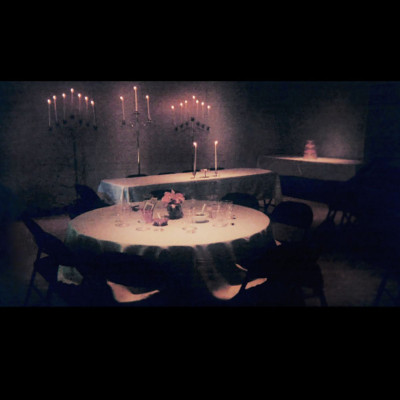 I found Rare Form hiding on the internet, the home of so much fascinating and groundbreaking music. The only information by way of a press release is the single statement that they make ‘atmospheric dark ambient, drone, noise, and post-rock music by relying heavily on loops, drones, effects, movements’. Definitely. They make enthralling music that is at times dark, always atmospheric, often disturbing and sometimes uplifting.

More than any ‘ambient’ music I have listened to in recent years I felt strongly as though I was watching some psychological horror flick on Netflix, and that this was the soundtrack. Post rock and other expressive freeform genres are used more and more by makers of TV and film drama (Mogwai on Les Revenants, Godspeed You! Black Emporer on 28 Days Later, Sigur Ros in Vanilla Sky), but Six Months in Hiding feels like it was made to tell us a story, and that a film could be made from its songs alone (the titles are suggestive of a story). Several entire stories in fact, because on repeat listening almost every song feels complete – often running the whole gamut of emotions, good and bad, taking the listener from the start, the opening, through the set-up and dark occurrences that make it worth a tale, the nightmare events during which we might not see the light again, and the conclusion, sometimes a happy ending, sometimes not. It begs the question, ‘what is the someone hiding from?’ It’s not an easy listen – the light, early ambience of opener ‘Sophie’ lulls the listener into a state of believing that this will be a background ambient album: wallpaper music. But soon the emotional rollercoaster begins, and it doesn’t let up – it demands that you listen.

‘Sophie’ begins with an acoustic guitar and airy ambient swirls, that, like I say, makes you think you’ve got an altogether lighter album on your hands than in fact you have. Pangs of electric guitar start to come in as the intensity builds. After a time of lovely post-rock atmospherics, a grinding riff kicks in that ratchets the intensity up tenfold. There’s a tone to the guitar reminiscent of Sunn O))) (only not so slow). ‘You’re Safe Here’ has a drifting sample at the start that sounds like it’s running backwards on a loop. This, and the slow resolution of the soundscape into clamouring, muttered voices, helps to apply an atmosphere of paranoia and claustrophobia that rarely leaves us from hereon. This is where the dark story of this album really starts. Halfway through, when the voices have reached high intensity and ‘You’re Safe Here’ can’t get any more intense, it lets up and eases off. Only then does it hit you with a massive industrial riff that NIN or Godflesh would be proud of. In the soundtrack monologue I imagined while listening to the album, this is where the serial killer makes an sudden appearance.

Third track ‘The Train to Marathon’ is a brooding epic that reminded me of F# A# ∞-era GSY!BE. There’s a slow build, with random swirls and echoes that advance and recede like the tide, all underpinned by a claustrophobic minor chord picked on a lone guitar. A feel of faded reminiscence is brought in by use of a music-hall-style piano melody, which transforms into another heavy distorted guitar riff. A whispered female voice closes the track. Rare Form use light and shade to keep the atmosphere intense and brooding.

‘Closet’ does nothing to lighten the feel of the music, being closest to a dirge of looped voices, extraneous noises and far-off melody. It’s an interlude between the much longer tracks either side. The 20-minute ‘The Road to Awe’ starts with a lone voice, “Death turns all to ash, death frees every soul”. The Godspeed influence comes through again as the track gets going. In my imagined story monologue, this was someone desperately searching for a loved one in a darkened maze. What starts as hope descends into terror as the searcher is pursued by something unseen. A darkened dirge develops, with chilling strings and thundering guitar, a nightmare maelstrom of darkness and chaos interspersed with unsettling lighter piano interludes. The following ‘Jailbait’ is just nervy, with hazy, broken samples of children singing, and jagged and distorted guitar parts over the top. Closer ‘Nervous Laughter’ doesn’t let up on the fear inspired by previous tracks, with a rumbling bass undercurrent. The quiet fade-out keeps the feeling of unease right to the final note; I don’t think this tale has a happy ending.

The cinematic scope and ambitious breadth of Rare Form’s music makes listening to Six Months in Hiding a very visceral experience. It fires the imagination in the way that good storytelling does, and for me it painted a picture more vivid than much ‘atmospheric music’. Not an easy listen, but a compelling one, which takes the mind on a journey to dark places.