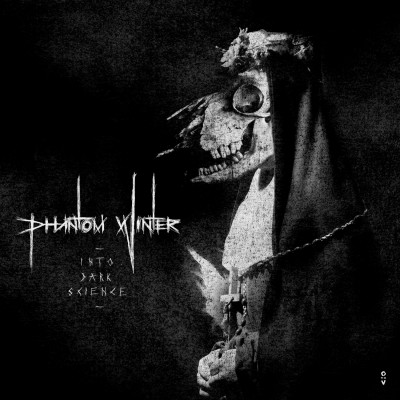 Into Dark Science by Phantom Winter

I was immediately taken by Phantom Winter when I heard their 2015 debut CVLT. Despite the dubious title of the album, the quality of material was undeniable and pointed to a bright future. It wasn’t without some understandable anticipation either, given the band featured ex-members of the much admired, often beloved post-metal titans Omega Massif. Indeed, the four members had gone their separate ways after the split, with Christof and Andreas forming Phantom Winter, Boris featured in Blacksmoker and Michael playing in the excellent Cranial. For those rolling your eyes at the mention of Omega Massif, seeing as the band are now at album #3, I do apologise, but they have and continue to cast a large shadow…

Phantom Winter had stolen the punch on their past comrades-in-arms so-to-speak with CVLT and followed it very quickly with 2016’s Sundown Pleasures, to remain a band very much on everyone’s radar. The second album had appeared a little too soon in my opinion and hadn’t really expanded the ideas laid out on their ‘cvlt blueprint’ of blackened post-metal.  It was a good album, but not a great album. So, with a slightly longer gap and far more gigs under the four-piece’s collective belt, would Into Dark Science deliver where their sophomore effort had fallen somewhat short? Sadly not, I’m afraid. It’s once again an album with plenty of commendable traits and with flourishes that point to potential buried only just below the surface. But the blunt truth is that Phantom Winter have frustratingly failed to mine that rich seam yet again. And sometimes, just sometimes, it misses the mark completely, such as on ‘Frostcoven’, which surprisingly became the lead track for the album’s promotion.

I watched far too much of the Winter Olympics Games in recent weeks, so please bear with me and my tenuous link to their name, due to both including the word ‘winter’. The band are like the grown child of a mother or father who had won a clutch of gold and silver medals in games gone by. Following in their footsteps, but with their own inimitable individual style, they announced themselves on the world stage with a solid bronze. Here, surely, was the start of an extremely promising second-generation legacy. But then… 4th and 4th again. And look, 4th is an incredible achievement! Those performances will be remembered for some time to come, especially within that close community. But, let’s face it, they’re not going to be on the show reels or really even remembered the time the next games come around.

My laboured metaphor notwithstanding, Phantom Winter have kind of disappointed my expectations here, not living up the ‘hype’ that I myself have internally created for them. To switch to another wretched metaphor; all the ingredients are present here to cook something with real umami, but the cooking is just that little bit off that we’re faced with the prospect of ‘only’ an enjoyable meal. If this strikes the reader as unfair, I kind of agree. I’ve built up my own expectations of Phantom Winter and Into Dark Science falls short. Whose fault is that? Mine. Absolutely.  But I can’t get outside my head, try as I might. This album just doesn’t do it for me. I won’t be surprised at all if it clicks in just the right way for others. That’s the beauty of music and certainly musical writing, debate and opinion, after all.

I have to admit, that unlike a great many others, vocals can really make or kill an album for me, too. Phantom Winter, especially on this third recorded iteration, present a lot of high shrieked vocals that become rather grating (and not in that good, claustrophobic way). The lower vocals and much of the musicianship is very good, and Into Dark Science would probably score an extra point from me (if we did score), if they higher screams were mostly left out. I know that recommending deleting the vocals rather than constructively criticising them is a rather bold and harsh comment, but there you go, I’m being honest. It wouldn’t fix all the issues I have come across when listening to Phantom Winter’s third album, but there are some great tracks, particularly ‘The Craft and the Power of Black Magic Wielding’, that would greatly benefit from it.

Phantom Winter are an incredibly talented band, and Into Black Science is a solid album, let me be clear. It also ends on a real high point with closing the crushing eight-minute monolith ‘Godspeed! Voyager’. I have a feeling that to the uninitiated and those not as affected by some of the vocals as I was, will find much to admire here. However, to these ears, it just misses the high mark I drew for them. But, I already know I’ll continue to listen to this album, and that sense of wanting to come back is clearly a positive and commendable. I feel I ought to, as I know the pedigree is high and very much believe that I owe it to myself and the band. There’s also the sense that there has to be something even more exciting on the horizon. For now, I’m going to wrap up warm for a fourth winter instalment from these Würzburg noiseniks, with only thoughts of gold in my mind.