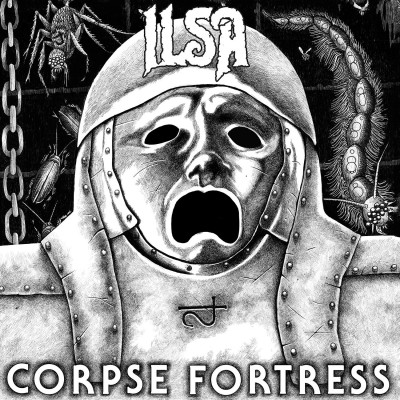 Corpse Fortress is the Relapse Records debut from DC/Maryland underground cult band Ilsa. Interestingly, Relapse have them pegged in promotional materials as having elements of “crusty death metal”, which had me scratching my head as to whether they had signed the Ilsa I knew and admired. Thankfully I can confirm that they are indeed the feedback drenched sludge band who had released a steady stream of filth since 2009 with their previous best examples coming courtesy of the excellent A389 Recordings.

After repeated listens I still can’t really hear much that supports such a strong mention of death metal (a bit of double bass maybe?), but that’s OK, because Ilsa have always been masters of horrible, horrible sludge. They’re really not in need of playing with their sound too much. If you’re a fan of Sourvein and sludge that doesn’t move at the more traditional pace – The Abominable Iron Sloth comes to mind – then Ilsa are for you  Corpse Fortress is going to put them on the radar for a hell of a lot more people, especially with the backing of Relapse. Despite its title, its artwork and so on, the main thing I take from this, their fifth full length, is that the band sound like they’re having a ton of fun conjuring up this misery. The dour image of sludge bands is well known and documented, but there’s always a side of it that I’ve found (mostly live) that has to do with playing loud, drinking and having some crusty head-nodding times with friends and like-minded people. You could easily play Corpse Fortress at a drinking session with your buddies (if they have great music taste, and why wouldn’t they if they’re your friends?) and it wouldn’t feel out of place. In that respect, Scissorfight came to mind, too, despite the musical differences.

Corpse Fortress opens up with stunning opener ‘Hikikomori’, opening up their new opus in a languid way, brutishly bludgeoning, and announcing their ascension in the scene. Then the album goes for the jugular, with a 1-2-3 hit of shorter tracks, all with their own individual way of pushing their brand of tar and molasses ever more quickly down the mountain of doom. The progression in songwriting and guitar work on the album is something to be noted – previous efforts have hinted at their ability to create an album such as this, and while always enjoyable, often fell short of something that would make year-end lists. Corpse Fortress should have no trouble achieving this in 2018, despite the release being still so early on.

‘Old Maid’ and ‘Long Lost Friend’ are a duo that nicely change the pace of the album for its second half, slowing things again seemingly only for the excuse to wrong foot us before the brutal speeding gallop of ‘Ruckenfigur’ tramples eardrums underfoot. The second half of Ilsa’s latest opus is definitely the slower of the two, as they turn their attention to incorporating a few more elements of heavier sludge and even doom into the mix. ‘Polly Vaughn’ is positively caustic in its breach of the time continuum – fitting in the pace and solemn passage of a ten-minute track into one that only lasts six. Its fury is unrepentant, and it continues to ache and maim as it grinds to its close.

Ilsa finish off Corpse Fortress with ‘Drums of the Dark Gods’, a seven-minute assault on the senses, which is a track that will have fans of Eyehategod losing their minds. It’s a track that dabbles with the same dynamics the New Orleans legends use; a cement-drying pace, agonised vocals and a band really focusing on the structure of a song to deliver heaviness, as well as just brute force. There are expanses in the track when only a single guitar is striking out its own paean to hell, and vocals are screamed away from the recording mic, to give a sense of atmosphere and unmeasured anguish. Orion screams “torture unrelenting”.  Indeed.

Corpse Fortress is an absolute triumph for Ilsa. It’s required listening in 2018 for anybody who claims to like sludge and doom. You’re not going to find too many better examples of it this year.