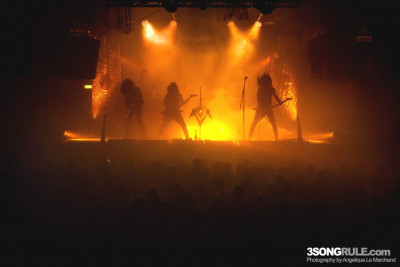 Wolves in the Throne Room at Heaven

Two bands coming at black metal from different directions, and both seen earlier in the year at Roadburn, Aluk Todolo and Wolves in the Throne Room promised to be a memorable gig in central London. The ritual took place in Heaven. Quite.

Heaven is an excellent venue near Charing Cross in London, and really ought to be used more by promoters that prefer their music crushing. Its underground arches lend it the right atmosphere, but rather than being the wrong kind of oppressive, both the stage, bar and standing room are all open enough to allow for a good view and room to move around fairly freely.

Aluk Todolo, the French three-piece take to the stage with their signature set-up including the large bulb that reacts to their performance. Interestingly, the band eschew their newest (and extremely fine) album Voix entirely, and instead play the first half of 2012 album Occult Rock, four long tracks, all clocking in around the ten-minute mark. My only thought, as there is no explanation from the band who do not interact with the sizeable audience, is that they are crowd-pleasing, as much as their style possibly allows, by playing out the more expansive side of their repertoire. Voix is incredibly complex, dizzying in its originality, and at times ravaged the black metal template. While Aluk Todolo have never been a simple black metal band, Occult Rock pleased itself with tearing up the rule book inside the envelope, rather than their latest offering burning its confines and the outside world around it. 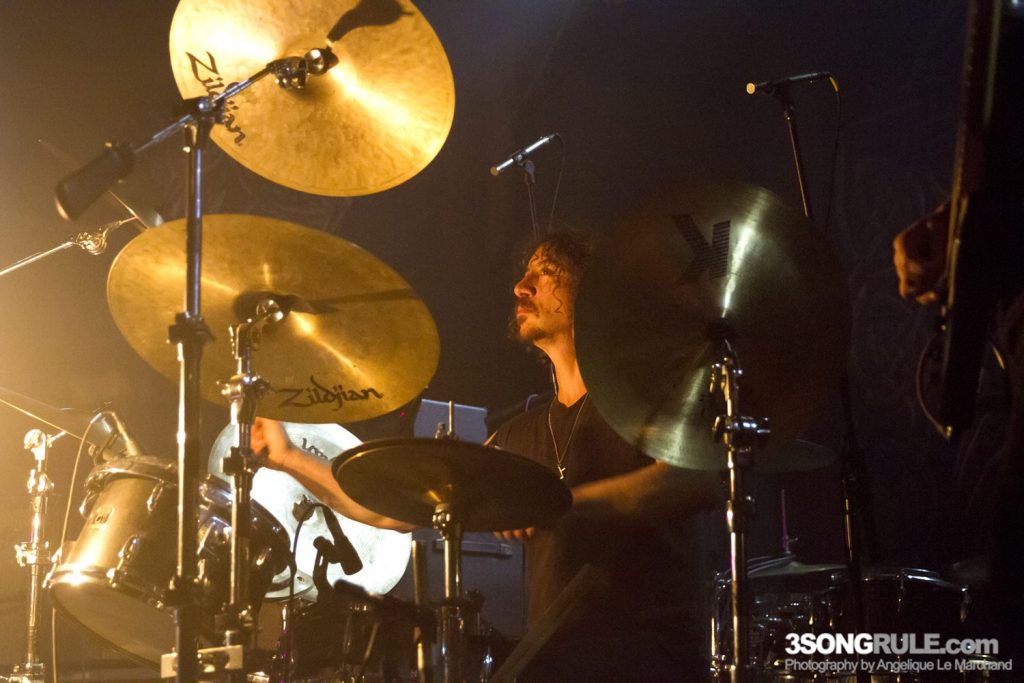 The band’s performance is engaging, and despite the incredible drumming and mind-boggling guitar work, it is the bass that casts the spell this evening. Simple structures spill over into frenetic work that at times tightrope walks its way to tuneful, catchy refrains and then boils itself down into low-end magma. The material also has elements of doom that the band – for now – seem to have worked out of their system; but with this crowd and with their ever-tightening cyclical crescendos reaching fever pitch, it is with these bellowing, drawn out, torturous refrains that they capture the audience’s imagination. Tonight, they are so utterly on point that their performance eclipses their set at Roadburn, despite them playing my preferred material. Here’s to a band who knows what material to play on what night, and not being afraid to delve into their back catalogue for their whole set. Respect for the evening and their audience surely earnt them a lot of respect on the night; and I imagine quite a number of the uninitiated were Googling their name hours later. 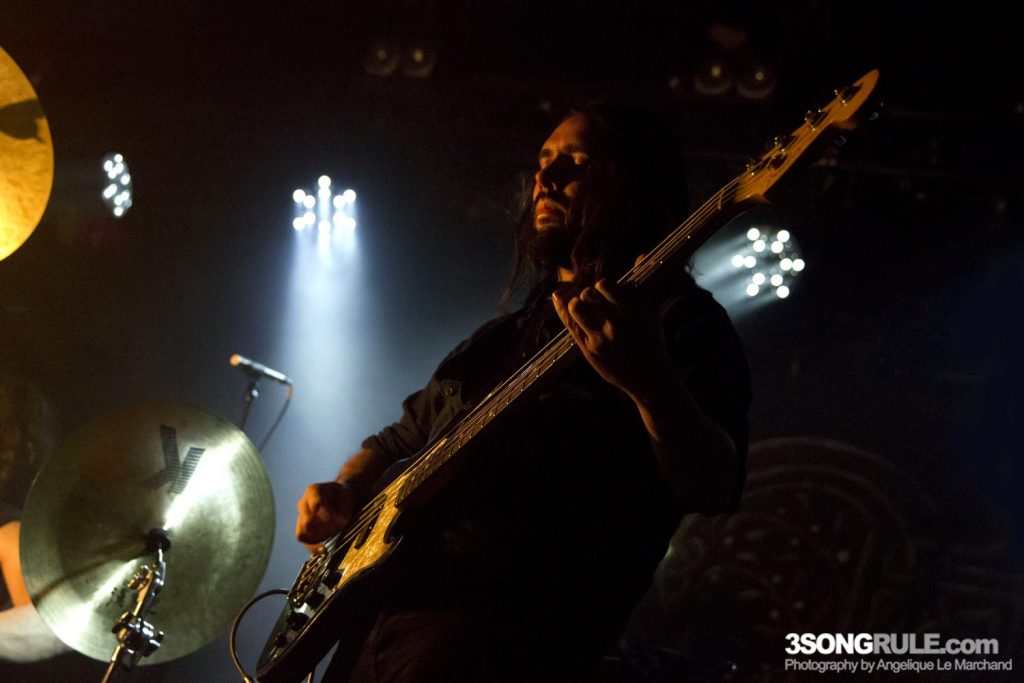 Wolves in the Throne Room took to the stage as a band returning to take back a crowd lain in waiting. Long years had passed since the band had released a black metal album, and in 2017 they finally had with the excellent Thrice Woven. Coming out in a haze of smoke and incense, the band begin with purpose, opening proceedings with the first track from their most recent opus, and although many people immediately go insane, I feel many are reacting in a Pavlovian fashion. The sound for the first fifteen minutes of their set, which includes opener ‘Born from the Serpent’s Eye’ and the instrumental ‘Dea Artio’ isn’t great at all. I can only imagine the sound guy is a drummer. Normally I’m requesting drums higher in the mix, but this is ridiculous. No one else seems to be that bothered, but as the band transition into ‘Vastness and Sorrow’ a sudden correction lends the rest of their set a fantastic sound. Now, I was either having a mini-stroke, or everyone needs to be a little more critical when at gigs, as everyone seems to nod harder and scream louder when major riffs are suddenly identifiable. 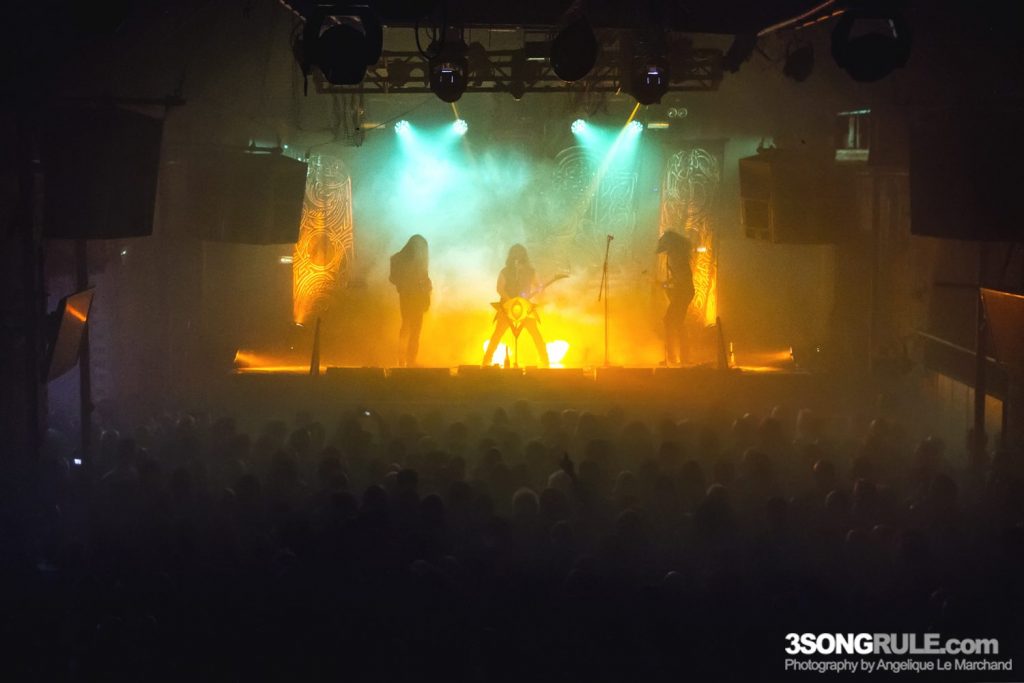 Playing tenth-anniversary shows doesn’t seem like something WITTR would do, but it makes sense that half of their set tonight is from 2007’s Two Hunters. The album should rightly be celebrated, and for many remains the band’s calling card. One can debate whether it is their best, but it was certainly the record that vaulted them into the influential act they have been ever since. ‘The Old Ones are With Us’ returns us to present day, and despite being excellent, is perhaps the only dip in their set, as some of the audience still haven’t quite allowed every part of the new record to be memorised just yet. 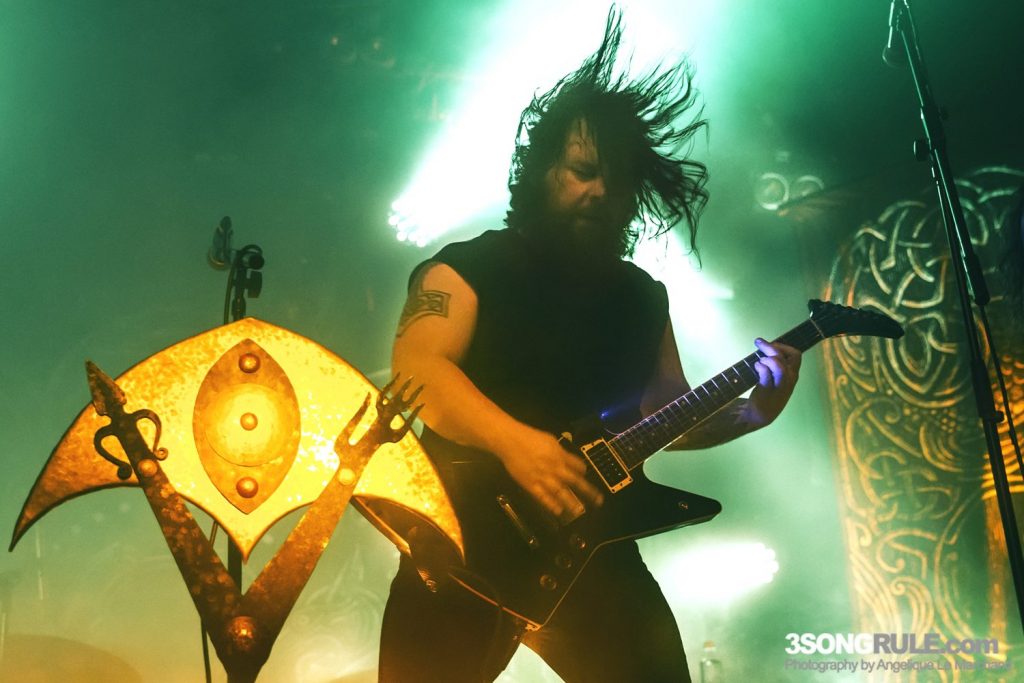 The band press on with ‘Prayer of Transformation’ from Celestial Lineage, and gather up any wilting audience members in its thrall. Brothers Weaver and new permanent member Kody Keyworth line up at the very front of the stage and the audience moves as one, following every riff. Drinking from wine bottles the band take a brief respite before finishing off with their trademark twenty-minute finale, the classic closing number to Two Hunters, ‘I Will Lay Down My Bones Among the Rocks and Roots’. It is, as always, a moment of pure exaltation when that cyclical earworm of a riff rings out in any venue. In Heaven, it does become a sort of holy refrain for the entire audience who once again moves as one, many with eyes closed, as Wolves in the Throne Room finish their mystic spell over London. 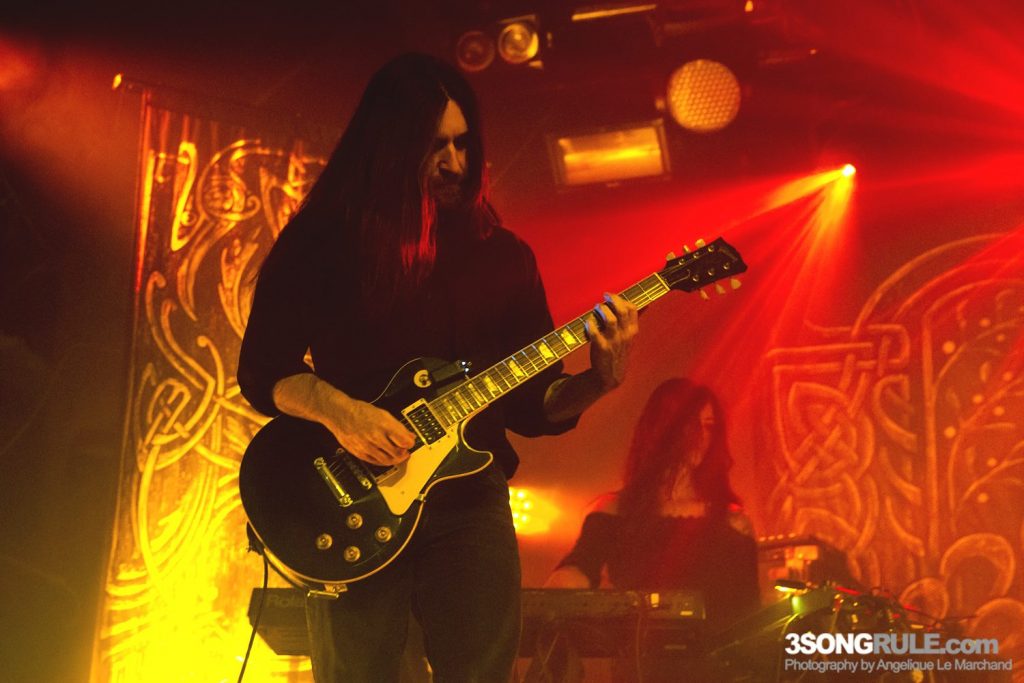 London is truly treated tonight. WITTR regain their crown, while Aluk Todolo may very well have found their name written in the lineage of bands waiting to take it from them.