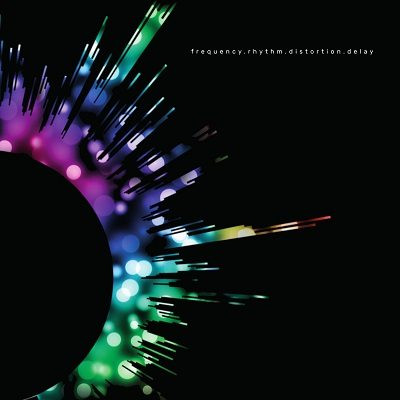 Psychic Lemon‘s self-titled debut album was something of a head-turner here at E&D Towers, so it is with welcome arms that follow up Frequency Rhythm Distortion Delay is accepted into the fold. Would it match up to the sheer excitement that the debut album produced though, or was it a case of flash in the pan for this unusually monikered band. Well, thankfully it is great to report that not only is this album a match for that debut, but it is even better.

Signalling a change in sound, although nothing which would tear you away from that debut too much, Psychic Lemon have evolved into a band of exciting proportions. They may be four meagre space cadets with a penchant for Amon Duul II, but it seems that that heady Cambridge air that Syd Barrett breathed in, has left its lysergic quill upon their own writing. Turning up the heat a notch on this second release, we find the band in full on industrial big beat mode, all clattering melodies, and freaked out garage rock. Where the first album sounded like Primal Scream mixed with Jethro Tull, this one simply sounds like Primal Scream doing ecstasy with The Stooges. You dig?

Loosening up with tribal rhythms and a lysergic beat stripped right from the heart of an old Doctor Who soundtrack, ‘Exit To The Death Lane’ takes an anthemic lurch through the universe of Psychic Lemon as they warm up the cockles of their minds on a pounding beat, colouring the heady atmosphere with squalling guitars. It’s a full on approach which takes no prisoners and quite frankly the band don’t let up for the next 40 minutes.

The clanging industrial sound of ‘Hey Droog’! is the first sign that Psychic Lemon are not afraid to push forward with their music with its incessant itch curling around yur sinews, repetitively hammering its message. Bass lines rattle as a funky riff leads us into a big beat sound of chiming synths. By the time ‘You’re No Good’ starts, the driving sound has left the rave dancefloor and taken on a decidedly krautrock ethic. It’s only when a wayward saxophone throws in an almost unhinged quality that you get a hint of that Stoogian Funhouse feel that they have bottled up for those prime moments of explosion.

The fluttering saxophone almost threatens to derail proceedings as the track descends into an orgasmic chaos, ripping holes into the track with terrifying plunder. It’s a glorious moment though and serves as a particular high point of a wonderful album. Following track ‘Interstellar Fuzz Star’ is almost a lurch too far with its more traditional psychedelic sound, although its probably testament to the nature of the band that they make such a change in pace sound like life itself. Unpredictable at all times.

‘Satori Disko’ takes flight in another direction altogether as the intense hammering of the album takes a turn for the chilled. It also features the return of the saxophone whose jazzy refrain leaves a lilting impression upon your mind. Still loud, the track leads you into your comedown as the band bid their farewells. At least for now.

So that dangerous second album has turned out to be a remarkable achievement which cements Psychic Lemon as one of the most exciting and interesting bands in the UK at the moment, at least within the ever lengthening psychedelic circles. They produce a sound which fits in well with the current crop of upbeat bands with one eye on the dancefloor. It would make for one strange disco to have this lot as your guide though, maybe that is where they should head next. Miss this one at your peril. We have the first great release of 2018