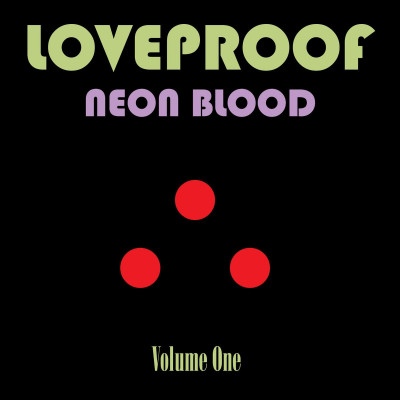 In the depths of winter, Loveproof manages to both haunt and heat with their stirring debut, Neon Blood. Singer Ciaran Megahey (The Autumn Stones) flourishes hotter-than-Aruba vocals against the darkwave throb of Brendan McGarvey’s synth lines, an effective and seductive contrast that harkens back to none so strongly as ‘80s icons Roxy Music.

In fact, the ‘80s vibe of Neon Blood is unabashed, evident from the first glance at Loveproof’s album cover, the Bauhaus font and colour scheme evoking video games and the first desktop computers; the title and precise, stylized blood drops, robots or androids. The title, suggested by McGarvey, was set long ago. Megahey shares, “One of the reasons I immediately liked the name was that it reminded me of Predator, one of my favourite films in childhood. I still love it. His blood was neon green.”

‘Sister Moonlight,’ the second track and first single, is a potent one, harnessing Megahey’s sexiest timbres to a New Wave soundtrack, evoking David Sylvian’s Japan and Peter Murphy’s Bauhaus. “Summer is in your eyes / The sacred in a new light,” Megahey intones, but warns us, “She’s on the waves of whatever / but nothing lasts forever / What’s not to be / What ought to be.”

Top pick ‘Post’ pulses to a repeating synth chord and musically suggests Everything but the Girl’s early albums and Dream Academy’s ‘Love Parade.’ Megahey repeats the chorus: “And I am your signpost / with our worlds entwined” over McGarvey’s twinkle of well-conceived drums that delicately punctures the sobriety of Megahey’s deep tones.

Not every track works so well: A similar sonic blend (though less well mixed) illuminates ‘The Lowdown.’ But Megahey’s baritone, rich and soulful in its upper range, can lose precision at the bottom, causing the occasional waver of on-key accuracy. This may be to some degree intentional, creating a slight warped-tape effect, but it’s unwanted here on an otherwise potent song. The Spanish-guitar-versus-Casio-drums-tinged ‘The Vortex’ sports vocals overburdened with effects — as if the engineer was trying too hard to sound like Pink Floyd or maybe Chris Isaak. The song feels sloppily assembled, the impact less than it could have been.

Shimmery tracks like ‘Modern Ecstasy’ and ‘Neon Blood’ make maximal use of Megahey’s voice as an instrument, balancing its rhythm over the pump of bass, drums and synth in a shapely ribbon, ducking in and out of dominance. The lyrics are thoughtful (“Unclench your fists / Let us compare our myths” — a reference to Leonard Cohen’s Let Us Compare Mythologies, perhaps?), sensual and at times even succulently dangerous: “Howling / at your wounds / But you’re the sheep / and I’m the wolf.”

The album is a winner in many ways — evocative and moody, leaning on ‘80s nostalgia but well-supported by the duo’s songwriting and Megahey’s  vocals. Unfortunately, the polish implied by the musicianship and style is wanting on the result. Partly this is, no doubt, owing to the recording of these pieces over a period of four years; mostly it can be blamed on a frequently muddy mix that feels like an afterthought. Drums are too high, too thin and too far in front. Attention to EQ would allow Megahey’s voice come through without raising the volume, rather than getting lost in the mix and trampled under the synth. Inconsistent reverb styles across the instruments and vocals means the work loses all sense of live music. This would not necessarily be a problem (a studio sound is very ‘80s), but here the inconsistency is sufficient to be a distraction, causing the music to sound at times more like a collection of parts than a coherent whole.

These are fixable problems with the right engineer, and the bones here are excellent: several strong songs, a proven sonic sensibility, a skilled instrumentalist and a singer with pipes that stand among the best of his era. Loveproof (named in honour of My Bloody Valentine’s ‘Loveless’) they may be, but if you can’t have love, well, perhaps you’ll settle for a heavy crush.

We look forward to Volume Two.