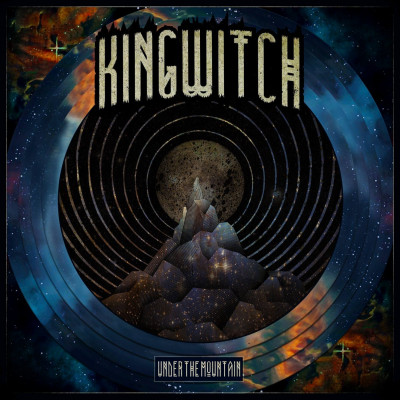 Under The Mountain by King Witch

The album opens with ‘Beneath the Waves’, the track tackling the aforementioned theme of Moby Dick. The song sets the tone for the album to come, crushing riffs reminiscent of Crowbar, are backed up by pounding drums. On top of this excellent musical maelstrom, are the incredibly powerful vocals of singer Laura Donnelly.

Under The Mountain is a cohesive album. None of the tracks feel disjointed and each song flows nicely into the next. Track two ‘Carnal Sacrifice’ continues the pacing of ‘Beneath the Waves’, neatly straddling between traditional and modern metal.

King Witch know how to pace an album. Under The Mountain isn’t content to pummel the listener with only fast songs, nor does it unnecessarily place its slower, doomy, songs where they might not fit. The opening salvo of ‘Beneath the Waves’ and ‘Carnal Sacrifice’ are followed by the mid-paced melodic harmonies of ‘Solitary’ before moving on to the full of gusto title track. ‘Approaching the End’ follows and is a slice of modern doom metal genius. The song features lumbering riffs backed by gigantic drums and the same sense of menace that Ozzy intoned on the song ‘Black Sabbath’.

The song ‘Ancients’ shows a different side to the band. It is a sparse, acoustic, semi-ballad that serves as a nice resting point in an album that has so far pulled no punches.

The respite is brief and the final part of the album is an onslaught of riffs. ‘Possession’ sees the band in full on thrash mode and ‘Black Dog Blues’ closes the album with the same power that ‘Beneath the Waves’ opened it with.

The album has many analogues with other bands: Crowbar, Mastodon, Judas Priest, and even a bit of Alice in Chains (Donnelly’s voice is reminiscent of Layne Staley’s at its most powerful). But, like all good bands, King Witch elevate themselves above their influences and create their own sound.