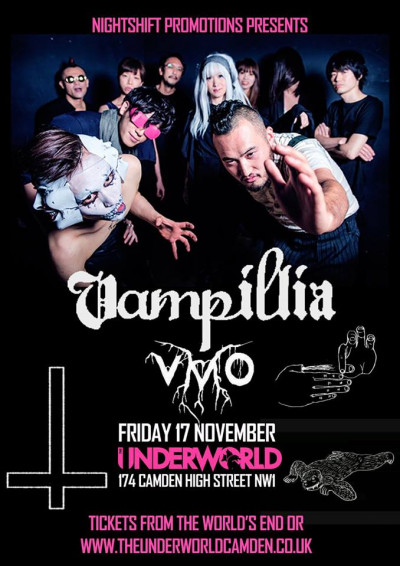 Vampillia at The Underworld, Camden, London

With the consistent outpouring of releases in such quantity across Europe and North America, and if one has the willingness to delve deeper down into those sprawling scenes, and therefore pick up gold from both there and those lucky enough to have any sort of PR machine behind them, music right now can seem overwhelming. When looking at the sheer number of albums I’ve given real air time to in 2017, the mind boggles. It’s upwards of three hundred. That’s excluding the excellent EPs and demos I’ve managed to check out and cherish along the way. Whoa…

Now, just think, there’s huge areas of the world where I have few tangible ways to navigate the scene – there’s distance, language and distribution barriers straight away. You just know there’s genius behind the veil, but how to lift it. There are some bands who many of us know, but that is usually due to relocation, incredibly heavy touring in Europe and the USA, or a label stumbling across brilliance online (or the band sending demos, etc., the old-fashioned way). Bands we know and love are those such as Boris, Mono, Envy, and so on. However, these very quickly become naturalised into the Western view of what our music scene is and what it encompasses.

Vampillia may not be anywhere as well known as the bands previously mentioned, but one could never level that they don’t tour incredibly hard and give us all a chance to see them in all their genius live, sometimes more often than big European bands. For this we should be thankful. VMO (short for Violent Music Orchestra) are somewhat of a mutation of Vampillia, given they feature a massive crossover of members and inhabit a similar sonic world, despite sounding radically different. Ruins Alone is the solo project of one of Vampillia’s drummers (who is the one present this tour), so overall, we’re looking at – along with their incredibly cool and faithful touring group – about fifteen individuals travelling from Japan and stuffing themselves into vans for weeks at a time. So, reflecting upon that, shame on London for the utterly appalling turnout. I remember watching Mouth of the Architect playing to a handful of people and, although appreciative of those in attendance, they basically announced at the end that they wouldn’t bother coming back to the UK, and to my knowledge have held fast to that resolve. I really wouldn’t blame this group of musicians if they didn’t promise themselves likewise.

Let’s just do some quick mathematics…  Latest estimates think London has a population of around 8.6 million. If 1 in 5k people (?!) like extreme music of the intensity and underground nature that The Underworld often puts on, and half those people are free for a gig tonight, and only one in five had heard of any of the bands, there should still have been 150+ people there. The fact there was a third of that number present at the very peak of Vampillia’s set is an indictment. Incredible, in the worst sense of the word. I could rant further…

Ruins Alone, aka Yoshida Tatsuya, took to the stage and ripped through a set just shy of half an hour. Ruins Alone is quite a literal name as it is itself a splintered rendition of material created primarily as a duo (aka Ruins). The set is based therefore on a whirling mix of progressive rock, jazz and noise, influenced heavily at its foundation by French pioneers Magma. Due to the fact this was a solo set of live drums and some programming, the sound was a little more narrow than original Ruins material, and overall leant into a sound that had parallels with heavy electronics and noise experimentation. Yoshida is credited by most as the best drummer in the Japanese underground, and so for the very few(!) of us there right from the start, watching him play was a real honour. Rather than further fumble with words trying to explain the sound I witnessed, I’ll leave the reader with the fact that Yoshida has released a number of works on John Zorn’s Tzadik label. There you go – that complex and that crazy, yes!  The defining point of the set came when Yoshida was joined on stage by insanely talented violin player Miyamoto Rei, a collaborator in Zeuhl rock band Korekyojinn and band mate in Vampillia. Just stunning. Wow. GLAD I WAS THERE EARLY, THEN.

Between sets a thin translucent gauze screen was placed across the front of the stage, and as VMO began, visuals were beamed onto it. With so many bands trying to have a strong visual aesthetic, often including film, it is increasingly difficult to be original. This is something VMO do suffer from. With a strong visual dynamic and ethos, including a member that is a performance artist, rather than playing any musical instrument or contributing vocals, the only drawback to this veil between band and audience is that it rendered him inert for half of their performance, although he did his level best to make up for that when he burst through the screen, tore it down, got in audience members faces with a mini strobe-light, and repeatedly dived off the stage into a core rabble of happy fans. Faces covered in quite unique takes on the black metal aesthetic, the band produced thunderous, pummelling backgrounds with harrowing vocals strewn over the top. Having seen VMO once before, I would have to say that their set this time around felt a little less intense and astonishing than before, but for a band that clearly values artistry, surprise, originality and risk above all else, their set was still ultimately refreshing and memorable. The fact that they are talented enough to pull 90% of their ideas off is a credit to them. VMO seems to me like an entity more than most that feeds off audience involvement and engagement, and so – not to labour the point – a smaller crowd than before felt less able to have a direct correlation with what they could give out.

Vampillia barely managed to fit onto The Underworld’s stage with their eight members and copious amount of kit, but they were certainly welcome back, having been here with VMO last December. This band deserve WAY more attention and recognition than they receive. Despite touring with incredible artists (and collaborating with in the case of Nadja) and having had albums out on code666, Important and Candlelight Records, Vampillia continue to allude most ears, it seems. If this is you, finish this review and then get hunting some streams online, my friend. The band were simply staggeringly good. Their music jumps so often between genres that to list them would be dizzying and would be an unhelpful description. There really are few true originals in music as a whole – even my favourite bands, whom I love dearly, often have their sound quite firmly rooted in some overarching ‘genre’, whatever one may call it, and with many no doubt squabbling over that definition. Vampillia belong to so many, and in each passage of a song, from track to track and between each release, they move chameleon-like so much that it does them a disservice to define them. But as so far, this review has been rather unhelpful in framing them, that night they shapeshifted between orchestral hush, post-metal crunch and black metal fury in the space of a heartbeat. A maelstrom of music delivered with twelve years’ worth of hard touring and confidence meant that the precious few there were left breathless by the end, and at the edge of euphoria.

If they do come back to the UK, please make sure to find space in the diary and go and see them.