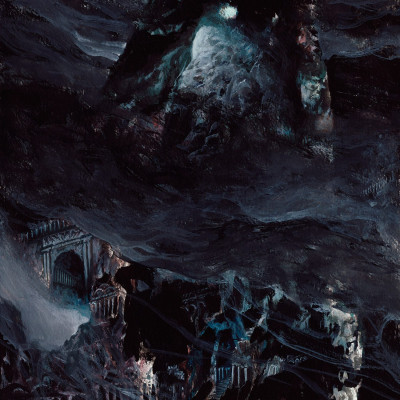 Split by Sutekh Hexen and Hissing

When I first heard that The Flenser were releasing a split between Sutekh Hexen and Hissing my immediate reaction was that this was a) very cool, and b) going to be a seven-inch. My experience of both bands had been in their more compact states. This is not the case here. Sutekh Hexen deliver a thirteen-minute diatribe in ‘Pareidolian’ and Hissing put forward the monumental sixteen-minute ‘Deserted Veins’. Such is the density of both bands previous work, I immediately knew this was a release I would have to sit back and take in, and revisit numerous times to really appreciate the layers each band were sure to be developing.

Oakland’s Sutekh Hexen’s main aim seems to be in creating atmosphere, rather than any real semblance or focus on producing ‘songs’. ‘Pareidolian’ is a study in producing dread. Rooted in black metal, but then immediately eschewing most of the genre’s structural rule book, the band usher forth abstractions of the past drenched in feedback and interspersed with the most minimal take on ambience as music. There has been a steady rise in ‘blackened noise’ or ‘dark ambience’, and although Sutekh Hexen from only a cursory listen do obviously meet the criteria most would list for inclusion in these sub-genres, there’s something about them that makes me want to not define so strictly, as it feels that the band’s breadth and potential far outstrips such rationalisations. Let’s just say they’re in the black metal field or scope, and be done with it. I’m allowing myself to squabble internally about genre in this review simply because ‘Pareidolian’ is a really difficult track to get across to those who may have not heard the band before. There is a considerable amount to unpack from the thirteen minutes they have committed to wax. For example, it was only on my third listen I really took note that there were indeed vocals. Six listens in and I was discovering whole passages under the overwhelming noise elements that I hadn’t even been conscious of hearing before. Quite extraordinary.

Seattle’s Hissing have been ‘a band of interest’ for some time. This is my way of stating that I’m pretty sure a lot of people are expecting big things from and for them. With the release of their self-titled CD I was excited and with a seven-inch EP last year – on Southern Lord, no less – the band introduced themselves to the wider public with their “bad times music” in the form of two tracks ‘Cairn’ and ‘Husk’. I was sold then and there. What I was unaware of is that ‘Deserted Veins’ is following a kind of release format from Hissing thus far: a couple of short tracks and then a single long one. I had missed the proudly ‘no riffs’ twenty-one-minute monstrosity that is ‘MMXVI’ which was released last year, appropriately, when they toured with Sunn O))). Unlike that offering, ‘Deserted Veins’ features riffs and structure. A cross between black and death metal with a hearty dose of noisey drone for good measure, the track feels like a landmark for the band; the joining of two distinct qualities into a finished, accomplished whole. In this respect, it reminded me of Poland’s Thaw, with their Jekyll and Hyde releases, but yet to rest perfectly at the apex of transfiguration. Hissing, for now, have beat them to it, and rather than waxing lyrical about the track for sentence after sentence, all I can say is that it has only sated the appetite for what this band might do next.

As a split release, I had planned to write that it didn’t quite work; that the two tracks didn’t mesh well into a well-rounded release. Over time, I was proved very wrong. Like those genius chefs of high gastronomy who pair two ingredients that on paper should not work, and yet produce perfection on a plate that has clarity yet depth, the split between Sutekh Hexen and Hissing contrasts but ultimately complements one another to form an essential piece of vinyl.