(((O))) Interview: “Songs about social injustice and the struggle for a better future” – An interview with Healer of Bastards 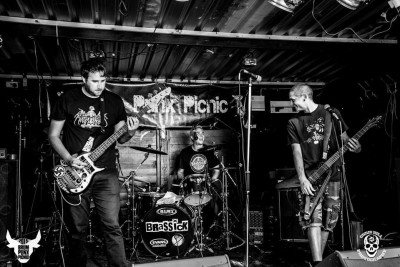 "I despaired with the state of the world when I was younger, and I educated myself about important and moral issues. Feeling utterly powerless to change the world, you have to start with yourself and then try to inspire others."

Melodic hardcore 3 piece Healer of Bastards comprising of Paul (drums and vocals), Jake, (guitar and vocals) and Simon (bass and vocals) formed in December 2014 and quickly released their self titled debut EP in May 2015. Just over a year later they released the 3 track EP Wage Slaves which engaged with working class experience in Neoliberal Britain “MPs would have us work to death, Retirement age at your last breath, Life reduced to bills and fees, Economic slavery.” (Wage Slaves), the evolution of warfare “Asks no questions, obeys all orders, No need to think what is humane, Not all wars are fought in defence, The Iraq war showed them this” (They are the Drones) and alienation “What is this place? – Why does that meal still have a face? Words fall on your ears – but the meaning seems to disappear” (What is This Place? (Not on Your Own)). H.o.B.’s mix of social concern and hardcore punk had one reviewer comment “… I had never heard these lot before but had checked them out online and was expecting them to be good. However not this fucking good… hardcore punk with a passion to make the world a better place… Tight, catchy and inspired. Healer of Bastards have some important stuff to say from ‘Killed By Catwalk’ through ‘Who’s To Blame’ to ‘Wage Slave’ they care…have a passion for change and musical ability by the tonnage” (1).