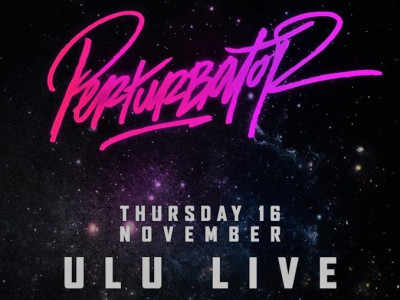 Perturbator at University of London Union

I have a distant memory of having drinks at the University of London Union – aka ULU – during some disgraceful evening that I only have flashes of. This, when no longer a student. Wrong city, even. What I didn’t take in that evening, due to my wholly intoxicated state, was that ULU is a proper venue and big. A rare beast in central London. During my time there I wondered how it could go so underused. But, upon finding a gig listing board, I found it with some form of entertainment every night. Underused by alternative music promoters, then…  Definitely worth investigating to anyone able to put sizeable shows on who may be reading this, FYI. It’s certainly worth the trip just to watch how cute everyone is queuing at the bar in long lines. The older generation tonight (read 20+) look on incredulously on, but have no choice but to join with a look of amusement and bemusement colouring their faces.

Remarkably, by the time Sleep Token take to the stage to start the evening off, there’s a very respectable amount of people front and centre to check them out. Perhaps this is due to the up-swell of media attention on the band since their signing to Basick Records, and the release of their second EP, cleverly titled Two, that landed this summer. A little fiddling on my phone during set-up informed me that this would be their second-ever gig. I was unfamiliar with the band’s music, so I couldn’t pinpoint individual tracks until I played them afterwards, but it’s safe to say the majority of their recorded output to date was showcased in their set. The conceit surrounding the group is that the band are representatives of an ancient deity known only as “Sleep”, and that their frontman is an appointed-one dubbed ‘Vessel’. Whatever one makes of that, the fact is that Sleep Token’s Vessel has a most extraordinary set of pipes. It should also be noted that ULU’s sound is excellent and the venue in general has two bars and excellent facilities and professional, accommodating staff. It seems a design flaw that there are doors right by the stage that some backstage go back and forth from, even during sets, which is a little disturbing to the overall ambiance.

Sleep Token put on a good show, given this is their second-only live appearance. With a lighting show in time with their music and the Vessel’s strong, soulful melodic voice featuring some impressive falsetto, they quickly engaged the audience. With the amount of vocal harmonies and extra musical depth that came over the sound system, I have to admit that it felt throughout their set that they were missing a band member, someone who could control and wield the keyboards, samples and electronics in a live setting. Donned with the obligatory cloaks the band produce a strong performance with their points of difference, clearly thought out prior to their live debut only a few weeks before. Their odd masks obscure their faces and during the quiet, vocal-led passages the guitar and bass players stood stock still. It’s simple, understated, but effective, producing quite the spectacle. Sleep Token’s transition between soulful, repetitive vocal melodies and brutal Meshuggah-esque riffery, and after a few songs this formula felt well-trodden. This is unfortunate as on record these transitions between the two disparate styles are far better executed – live there was far too much juxtaposition. Despite this, I and the majority of the growing crowd, were transfixed by their performance. A tour with Zeal & Ardor feels obvious, but would be a lot of fun to go to, and might give Sleep Token the chance to study a band who have managed to mesh genres to critical acclaim both on record and in the live arena.

Half way during ]HYPNO5E[‘s (don’t…) performance, as I’m shaking my head, I bring my phone out again to figure out quite why they’re here. My jaw hits the ground when I see that Pelagic are their record label. I can’t resolve those two facts, but spurred on by my respect for that label, I tell my brain to re-tune and think again. A minute later?  Nope, sorry. I take no joy in crucifying bands, so I’m not going to do that here: I will simply recount what I saw, and my personal opinion at the end. The band had some decent visuals, but it’s my belief you have to choose between beamed visuals and a lighting show. They have not, and so the 5–6-foot-tall mesh boxes the images are beamed onto after often obfuscated by either the lighting being very high and washing out the film, or causing long shadows from the band that drape across the screens. ]HYPNO5E[ use an unhealthy amount of samples in their music, so much so that any momentum briefly created felt constantly undercut by their inclusion. Management (or perhaps just support teams, whatever) were there for both Perturbator and ]HYPNO5E[ that night, but it was the latter’s representatives who seemed to pester the sound-guy more, with the former’s taking over a few tasks later on, and – in general – giving over a collaborative spirit from where I was stood.

I would wager that a small amount of the audience may have been there to see ]HYPNO5E[ alone, as in the centre of what was now a packed ULU, there was a rabble of screaming, fist-pumping and head-banging. Certain tracks caused great elation, but to my ears sounded like the same mush of noise that had gone before, except perhaps turned up a little louder and performed with greater bombast. Safe to say, I didn’t get it. An hour (an hour!) of indeterminate “metal” later had me pretty washed out. Long, meandering tracks that had some foundation in post-metal and a touch of “progressive djent” [can I say that?] left me tired and, quite frankly, frustrated. ]HYPNO5E[ just aren’t for me, but they kept the majority of ULU’s audience in rapt attention, even feeling comfortable enough that night to come on for an encore. First time I’ve seen a support act do that. Honestly, that’s weird, right?  Their drummer is kick-ass, though. So, there’s that…

When Perturbator (aka James Kent) made his first appearance on stage, the audience went appropriately crazy. I’ve wanted to see Kent play for some time, but such is the meteoric rise of Perturbator that those pretty large-sized gigs have sold out very much more quickly than I ever anticipated. The leading light in the ‘synthwave’ (retro-synth) genre, Perturbator is hot property right now, and ULU had filled considerably once again. With a cool, stripped-down stage and a simple but fantastic lighting show, Kent launched into his anticipated headline slot. The entire performance was peppered with crowd-pleasers. Kent must still be keenly aware that his true breakthrough album – Dangerous Days – is still his most loved, as it contributed to just under half the set. Last year’s album The Uncanny Valley features highly, too. With little interaction with the crowd with the exception of stepping forward at intervals to pump the crowd up again, Kent was lost in his music as all the best live musicians are. ‘Neo Tokyo’ levelled the crowd from the beginning, and when tracks such as ‘She is Young, She is Beautiful, She is Next’ and ‘’Humans are Such Easy Prey’ were played they figuratively melted the speakers and caused the entire ULU to bounce in unison. This was the epitome of what a fun gig can be: Perturbator’s colourful lighting show and colourful music lit up the night.

With the 2017 mini-album New Model signalling a change in the sound of Perturbator, it will be interesting to see what the future has is store, and how this may affect Kent’s live forays. Gone is the technicolour 80s of Dangerous Days and previous EPs, and in its place a far darker and more composed version of synth. Perturbator has been a name that has led the world in the particular niche of music it operates in, and so it seems only right that it is the name who begins to define a new future, and instigate and influence potential new sub-genres along its path. ‘Tactical Precision Disarray’ and ‘Tainted Empire’ both did and did not fit in during Kent’s set – they bear the hallmarks and tone laid down from previous recordings, but are a sea-change in many other respects. Even in the mêlée of a live gig environment the shift could be felt. Not a bad thing by any means, but different. If Kent follows on in this fashion a live set would certainly have a different vibe to it, and perhaps the gig overall that night would have tied together better than it did.

Who knows where he will go, but after this performance tonight, everyone will continue to follow his every move.