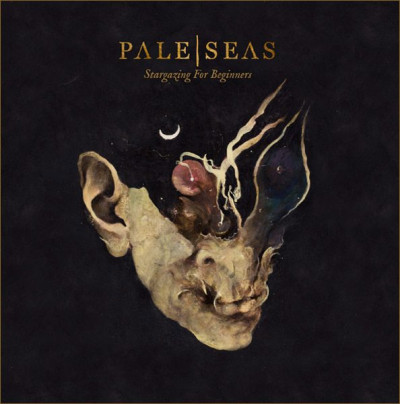 Stargazing for Beginners by Pale | Seas

They’re back. Highly-tipped indie-rockers Pale | Seas, they of the promising 2012 single (“Bodies” b/w “My Own Mind”, both of which can be found refreshed on the new album) and 2014 EP (Places to Haunt): They were going places, everyone agreed.

They were. But not where you’d think.
Where they were going was a medieval abbey.

After recording a full album in 2015, Pale | Seas tossed it in the trash — and disappeared. The band went on retreat for a couple of years, staying (literally) out of the spotlight, recording by night in Chale Abbey on the Isle of Wight and staying in near-isolation until the album was complete. Frontman Jacob Scott explains that many of the tracks were recorded as first takes, an attempt to get as close as possible to the feeling of the songs when they were first written. But there’s nothing unpolished about the powerful new album, recorded with the help of producers Chris Potter (The Verve, Urban Hymns) & Paul Butler (Michael Kiwanuka, Devendra Banhart).

Be advised, though: This is not music that sounds like it came out of an abbey. There’s no peaceful chanting here, no reassuring benediction. No resolution. Stargazing for Beginners, the result of those two years of seclusion, presents only the bleak reality: no matter how hard you love someone, no matter what art you create in their name, when they’re gone, they’re gone. Somber lyrics float out of Scott’s nasal-sweet tenor — sounding like no one so much as Australia’s folk-rock legend Paul Kelly — and come wrapped in a thick blanket woven of Graham Poole’s resonant guitars. Rounding out and enriching the sound are Andrew Richardson’s never-intrusive drums, both grounding and haunting bass work by Michael Bishop, and breathy ghost-girl backup vocals by Zealah Izabella Anstey (more prominent on the title track). Delicate picked guitar floats on top.

The whole here is greater than the sum of the parts. Analyzed individually, there is nothing deeply revolutionary here. The lyrics veer from poetic (“When all your dreams have eroded and scattered, / The stars shine brightly, / The stars shine over and over”) to mundane (“Someday the pain I feel in my heart, / Will slowly start to fade”), but they’re carried on a carefully layered sonic swell that can move the emotions when the words themselves falter. The music itself has a familiar, heard-it-before effect — some groups that come to mind include Suede, Dry the River, Dead Confederate, even Buzzcocks — but employs non-traditional cadence, like the 7-measure phrases in several songs, that keep the listener’s attention. By the time the album wraps up, with the initially slightly humdrum (surely we’ve heard octave-apart vocal arrangements too many times of late) but eventually emotionally enveloping ‘Evil is Always One Step Behind’, we’ve been on a cathartic journey through, we assume, Scott’s heart, but also through our own. The album dissolves in a sweep of tinkling glass and a single, persistent signal tone, and we’re left blinking slowly, wondering which world — the one surrounding us or the one we’ve just left — is the real one.

‘Someday’, the first single and video released, has an infectious rock beat and a satisfying outcry of a chorus. ‘Bodies’ (released in previous form as a single several years back) is an easy pick for a second single. ‘Animal Tongue’, another gentle rocker, is catchy yet dark: “Sometimes I feel like an animal tongue / weighed to the ground like some flesh you found”. ‘In a Past Life’ starts with a sparkle of electric noise but quiets to a gently sweeping anthem (distinctly reminiscent of some of a-ha’s later works). There are weak points: for example, ‘Blood Return’ has folk harmonies that hearken to Simon & Garfunkel and to Dry the River’s ‘History Book’, and doesn’t benefit from the comparison. ‘Heal Slow’ has a ponderous start that takes most of the song to recover from, despite the shimmer of the chorus. But these are bumps in a generally smooth road. If the album has a flaw, it’s that it takes itself a bit too seriously.

And that’s a concern: at times the symbolism and backstory, layered as they are in art, biography and press, threaten to overwhelm the music. Here’s what we suggest: Set down this review. Ignore the website and all labored explanations. Find a soft armchair, turn out the lights, and let Stargazing for Beginners remind you of the sad truths you’ve always known in your heart — and gently nudge you to look at the sky.