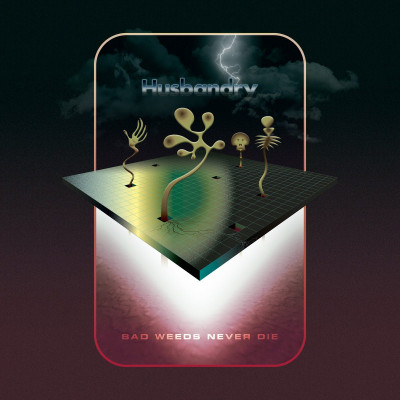 Brooklyn’s Husbandry sound like a faster, more aggressive Mars Volta, delivering soaring vocals and excellent musicianship in densely packed songs that constantly surprise. The band’s sound is rooted in mathy hardcore of the Dillinger Escape Plan ilk, versus the proggy funk of Mars Volta, but is much more than that. There is influence of punk, grunge and even some jazz, here. And it is one of the few bands where the skill meets the ambition. There doesn’t seem to be a whole lot these guys can’t pull off.

Its newest EP Bad Weeds Never Die, comes out on December 1st and represents some of the band’s best work to date. While retaining their bold go-anywhere style, the EP is a more streamlined and focused effort, signaling a greater maturity and command of recording. Quality trumps quantity here. There are only four songs and a remix, but it’s all meat, no filler. The band focuses on crafting intricate and unusual melodies that are both intellectually interesting while still packing a hell of an emotional gut punch.

Here-in lies the genius of the band. The trick with complex music like this is to not lose the emotional impact. This is where the juxtaposition between the onslaught of heavy riffs and Carina Zachary’s R&B influenced vocals set the band apart. While one hears a bit of Etta James and Billie Holliday in her singing style, it cohabitates with a bear-all, nothing-held-back ferocity that is all a function of great front men of the grunge/math metal era like Chris Cornell and Maynard James Keenan.

In addition to three original songs, the EP contains a cover Blond Redhead’s ‘Misery Is a Butterfly’. It might seem like an odd choice, but having now revisited the original, it’s obvious to me why the band chose the song. There is just so much potential in the original begging to be unlocked – which is exactly what Husbandry did. They turned a mediocre boring snoozefest into something huge. It’s beautiful, intense and ultimately kind of haunting.

The thing I like most about the band and especially about Bad Weeds Never Die, is the music is exciting, energetic, and fun, but retains metal heaviness. You kind of get it all, here, a one stop shop. If you like technical bands like the aforementioned Mars Volta or DEP, or even bands like Pallbearer, give Husbandry a listen. You’ll most likely be pleasantly surprised, a bit blown away, and possibly even a little in love.