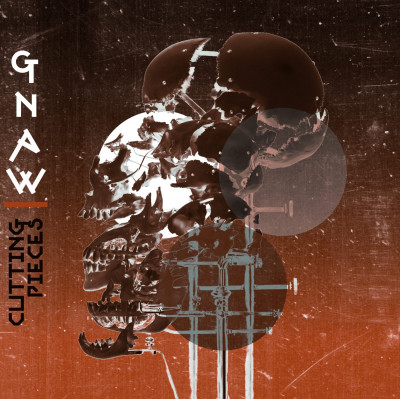 Most famously, Gnaw feature Alan Dubin at their helm, the shrieking, unhinged frontman of always missed, never forgotten experimental group Khanate who also had among their ranks Stephen O’Malley (Sunn O))), KYL, Grave Temple and many more), James Plotkin (he’s most likely mixed and mastered half of your favourite heavy albums) and drummer extraordinaire Tim Wyskida. It feels like I’m doing Dubin and Gnaw overall a disservice by spelling out this connection as I’m sure most reviews do, but with three albums spread over just more than a decade of existence and relatively quiet periods between records, it’s worth noting the connection this band have to the wider matrix of extremely high quality extreme music. It’s also important to note that Gnaw have now been active longer than Dubin’s more ‘famous’ band, and with Cutting Pieces he may well be finally stepping out from behind that shadow.

Gnaw’s first LP, This Face, released in 2009, was met with near universal acclaim from press and fans of the members’ previous projects. Using modulation, found sounds and heavy manipulation of all of their recordings, Gnaw were an unrelenting prospect, quite literally gnawing at the mind with their incessant noise. To have Dubin’s sharp vocal inflective running through the tracks with far less gaps in his monologues, was to have a nail rested against your temple and someone start hammering. It was quite rightly placed in album of the year lists. Such is the fickle nature of time and music, that – for me at least – 2013’s Horrible Chamber almost completely passed me by. I didn’t give it as much time as it probably deserved, but my immediate reaction was that it was more of the same, that it wasn’t quite as inventive and progressive as I had expected from a cohort that also includes former and current members of Enos Slaughters and Insect Ark; certainly not the leap expected from the starter marker and signal of intent they’d put down with their debut.

Cutting Pieces is a strange album, even within the scope of reference I previously had for Gnaw. Coming from the ever-wonderful Translation Loss Recordings, this new opus definitely leans back into the metal fold, and is a change from the aforementioned two albums. It really will depend on your tastes in genre and appetite for challenging music, whether this third album will appeal or not. Or rather, for me, it is an album written by extremely talented musicians which is well recorded, has flashes of genius and also some misadventure, and is simply a solid album. It’s not a landmark, it’s not an experimental ‘mistake’, and, honestly, if I wasn’t reviewing Cutting Pieces it would have probably found the same fate as Horrible Chamber in my music collection and listening habits.

It begins with ‘Rat’ and ‘Septic’, a one-two punch that is a strong beginning, and are the most recognisably “Gnaw-esque” tracks. The music is perhaps less insistent in volume and how high it is in the mix, which allows Dubin’s vocals to be all the more incisive. ‘Wrong’ rumbles along, and is sparser than the previous two, and Dubin employs his trademark whisper with also some new semi-melodic vocals. It’s closest to a more direct Swans than anything else I can come up with for comparison. It’s quite a change of pace and direction and although the track is one of the best on Cutting Pieces, it is sadly jarring to the journey. It also leads into the second half of Gnaw’s third album that one can either frame as a test of patience on an extraordinary challenging forty-five-minutes, or as the moment the album hits a speed bump and loses its way. Depending on when I listened I alternated between the two.

Shortest and central track ‘Prowled Mary’ lacks the bite to push the album forward in the way one expects, doing very little to prove memorable. ‘Extended Suicide’ was my clear favourite on Cutting Pieces, harking back to true Khanate howls from Dubin, and with the most vitriolic intent. It feels out of place, sandwiched between the previous track and ‘Fire’, which ironically left me similarly as cold. With ‘Fire’ and final track ‘Triptych’ having a combined eighteen minutes running time, the album slows down and becomes more reflective, like quite a number of extreme metal albums do in terms of structure. I just wonder whether it would have worked to speed up. Gnaw deal in muted, manipulated noise and atmosphere of calamity and vocal delivery and it occurs to me that the listener may have had more resolve early on, and that as time draws on shorter, sharper bursts could still prove enjoyable and engaging. Many may throw scorn on this, as one of Gnaw’s central tenants is surely to create exercises in oppression, but Cutting Pieces often errs on the side of producing fatigue rather than a paradoxical enjoyable ambience of alarm.

Cutting Pieces is an unruly listen, and morphs and mutates out of your peripheral view. Come at it one day, and it’s just too much and not executed as well as one expects. Another day and it provides the backdrop for your depression (y’know, in a good way?!). No-one could ever argue their originality and the intent to create “harrowing cinematic terror” is surely realised, but, in conclusion, Gnaw’s third album just misses an indefinable mark, and probably won’t get too many repeated spins.