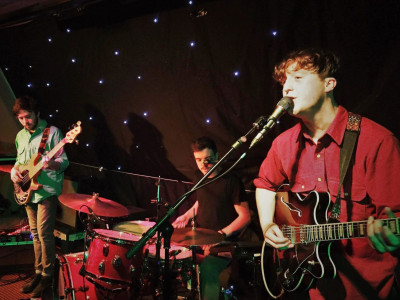 I’m going to come clean, straight off ,in the hope of bringing some clarity and transparency to this review. I attended university with a geezer called Dave Newington, both of us completing a popular music course as drummers. Although I shivered with envy as he consistently outplayed me for the three-year duration of our course, I came to admire Dave’s skill and seemingly effortless fluidity in the way that he moved around the kit.

Several years on, and Dave can already look back having battered the tubs for the infectious indie-pop act Monico Blonde, as well as Charlotte Church’s Late Night Pop Dungeon. Not content with just sitting behind the drums, though, Dave is so full and brimming with musical creativity that he recently decided to establish his own outfit. Enter Boy Azooga.

This time, Dave takes on the role of lead vocalist and rhythm guitar, while drums are played by Daf Davies, bass guitar by Sam Barnes, and keys/lead guitar by Dylan Morgan. Their sell-out gig at the Transport Club in Cardiff was the second time I have caught the band, the first being a few months back at Green Man when they opened the festival to enthusiastic onlookers.

This time, the space was… different. The Transport Club is one of those venues that is lost in time – carpets and wallpaper look like they haven’t been changed since the 60s, and the website is almost as ancient-looking too. There is something warming and sincere about this old-school, drab look though; it doesn’t really matter about your surroundings, it’s the company your in right? That and the music you are witnessing, which was nothing short of spectacular.

First up was Private World, another Cardiff-based band. Clean, crisp and faultless, the four-piece played through their current repertoire with unwavering precision. Their songs were at times very simple, but subtle details crept through via the guitars and drums to provide the keener listeners with a treat.

They were soon followed by Sock, who also took to the stage with a quiet confidence. The lo-fi vocals etched tricky lines across trebly guitars, while the drummer wrapped it all up in a nice tight package of goodness. His snare drum was particularly notable: drenched in reverb it sounded like a homage to the 80s – the best kind of snare sound. These guys warmed up the crowd nicely, with heads starting to bop and feet starting to shift towards the latter stages of their set.

The atmosphere picked up again around ten minutes before the headline act took to the stage, with the room filling up to the brim. Then, to accompany their climb up onto the stage, Henry Mancini’s ‘Baby Elephant Walk’ played over the speakers, transporting us all back to a simpler time. Nice touch.

Boy Azooga have this innate ability to strip everything back and play around with the bare bones of a song before generating an energy that is unparalleled. The musical prowess of every member is very easy to see and hear, and although each is extremely competent in his own right, the chemistry and understanding they share when playing together is a joy to witness.

Tracks such as ‘Sitting on the First Rock from the Sun’ and ‘Waiting’ are a case in point for the band’s confidence in taking giant leaps from subdued, detailed and dainty melodies to fiery and furious riffs. The crowd, which interestingly was made up of both young and older people alike, was extremely responsive – particularly to the likes of ‘Upside Down’ and the band’s debut single ‘Face Behind Her Cigarette’. Two eager participants even went for a surf, and at one point a mini pit formed. The members of Boy Azooga were seemingly delighted to see this room full of fans dancing and getting lost in their music.

A short encore saw the close of what was an extremely varied, gripping and catchy set-list. The band said their thank-you’s to rapturous applause, while a group of gents continued to shout “one more song” to no avail.

Although they have only recently formed, Boy Azooga have already started to turn heads. On 2 November the band signed to Heavenly Recordings – a London-based independent label whose roster includes the likes of King Gizzard & The Lizard Wizard and Mark Lanegan. Shortly after, Huw Stephens, the BBC Radio 1 DJ, selected ‘Face Behind Her Cigarette’ as Tune of the Week. My prediction is that there is a lot more to come from the band in the coming months.

I had a brief chat with Dave after the show while he was packing down and simultaneously speaking to about twenty other people. I asked him if he enjoyed himself. “It was epic man, thanks so much for coming! Let’s go for a beer sometime soon.” The nicest guy fronting Cardiff’s hottest new band. I, for one, will be eagerly awaiting the launch of Boy Azooga’s first album.