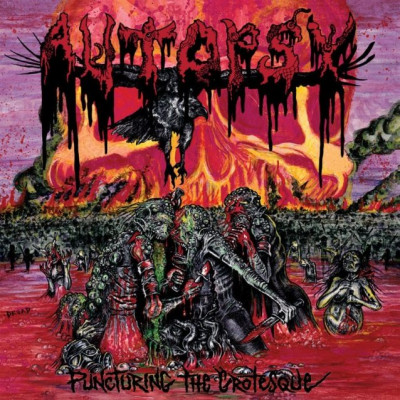 Puncturing The Grotesque by Autopsy

What better way to mark the anniversary of three decades of death and depravity, US death metal legends Autopsy have returned with a seven track mini EP, the bands first release since the Skull Grinder record of 2015. The four piece of Chris Reifert, Eric Cutler, Danny Coralles and Joe Trevisano have colluded for twenty minutes of horrible noise to delight and defile your ears.

It opens with the brief instrumental of ‘Depth of Dehumanization’, which both literally and stylistically sets the scene for the rest of this release. A slow building noise scape which gradually reaches its zenith just at the right moment for the title track to come in with its punk fuelled vitriol and Reifert’s trademark dark growl. ‘The Sick Get Sicker’ covers the whole range of his vocal prowess before ‘Gas Mask Lust’ slows things down into a doomy, filthy mire, like they did back on tracks like ‘Praise The Children’ back in the 90’s.

‘Corpses At War’ picks up the pace a little and throws in a few little surprises. Almost tuneful in places, in the sense that melody breaks through the distorted shell surrounding the track before the pure autopsy terror of ‘Gorecrow’ brings you back down into their sordid, perverted normality. The switches in tempo between Sabbath inspired doom and the rumble of punk fuelled death metal. It closes with another dose of filthy punk with ‘Fuck You!!’, which has featured on their recent split with Bloodbath.

All in all, its just what you would expect from an Autopsy release, just with a few little twists and turns along the way. To be able to come back after a fifteen-year hiatus and release such a large amount of consistently quality material is testament to just how good this foursome is. They have been both prolific and consistent and swept away much of what came whilst they were away from the scene. Hopefully we wont have to wait too long for a full length release, on this form it would be definitely worth waiting for.