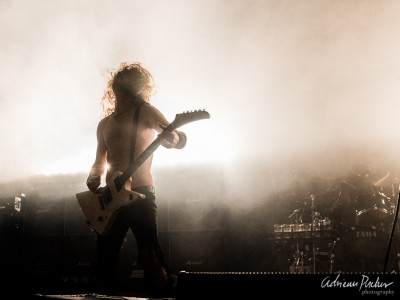 Airbourne at The Roundhouse

Airbourne on the web:
Website | Facebook |
Support: Phil Campbell and The Bastard Sons| The Wild
November 15, 2017 at The Roundhouse

“Tonight is a night of no bullshit rock ‘n’ roll,” Airbourne frontman Joel O’Keefe declares, “no ballads, no fackin’ acoustic guitars and shit.” And he’s a man of his word. Since forming in Warrnamool, Australia, in 2003, Airbourne have been delivering such a promise of rock with a tenacity, consistency and enthusiasm that ensures them headlining slots on long worldwide tours. Since releasing their debut, Runnin’ Wild, three years later, ‘bourne have toured the world, supported legends of the genre (and Kid Rock), had legions of fans ape their licks on guitars made from wood, air and pixel, enlivened the upper echelons of the world’s album charts, signed to major labels, abused alcohol in new and innovative ways, and generally done all the things that you’re meant to do when you play songs with titles like ‘Too much, Too Young, Too Fast’ and ‘Stand Up for Rock ‘n’ Roll’. And tonight, they’re an unstoppable force of power and fun that no doubt brings a huge grin to very face in the room. 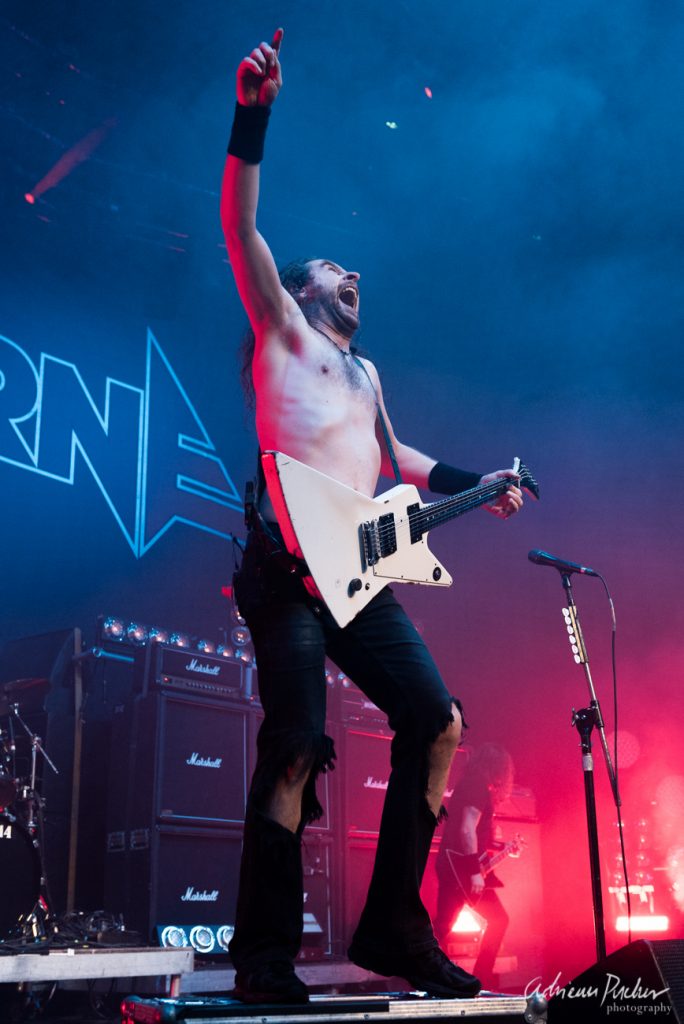 First support this evening comes from rock oiks The Wild, four “freedom seeking renegades” from British Columbia, Canada, as they describe themselves. Unfortunately, my tube journey to the venue turned out to be as crazy as their name promises, and I arrived just as their final chord ended in a crescendo of distortion and applause. Judging by the sampler CD one of them gave to me at the end of the show, their brand of straight-up, joyous punk-rock set the tone for the evening perfectly. 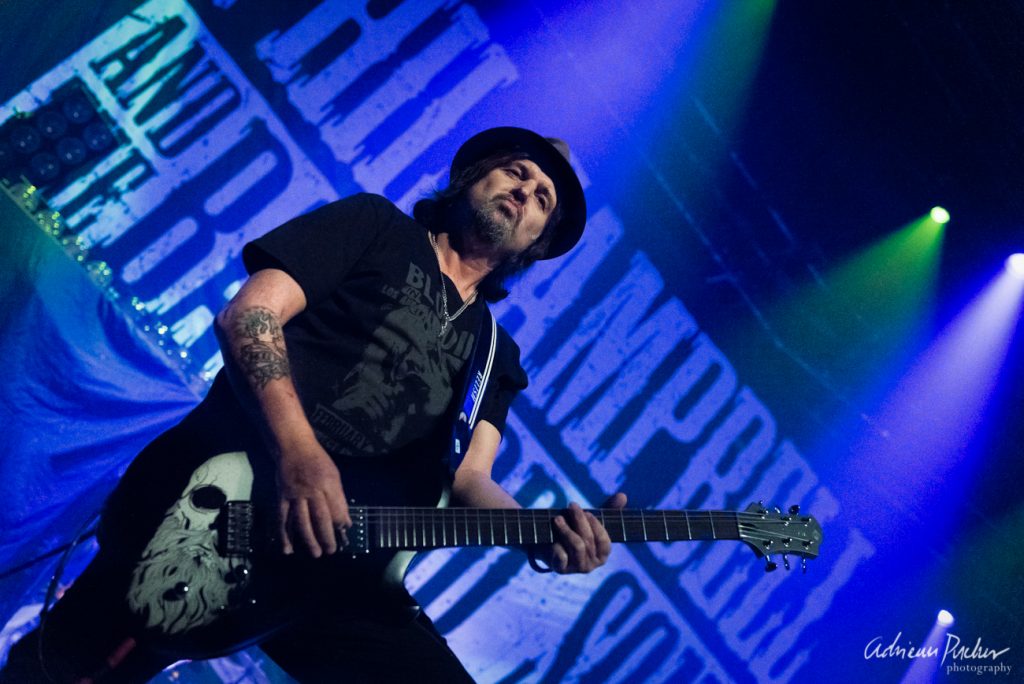 It says a lot that Airbourne are also supported by Phil Campbell and The Bastard Sons tonight. Supported by. You know, the same Phil Campbell who cranked out dirty power chords in Motörhead for over thirty years. The same Motörhead that Airbourne supported several times over the years. Saying that Phil Campbell plays rock ‘n’ roll is a bit like saying that the Roundhouse is dome-shaped. Duh. Emerging from the seismic vibrations that shook the rock world following Lemmy’s death in 2015, Phil keeps his Bastard Sons local, featuring other musicians from South Wales, and (almost) all in the family, with only frontman Neil Starr the only band member not literally one of Campbell’s kids. Following a medley of Deep Purple and the Monty Python & the Holy Grail theme song – which sends air guitar shapes and nerdish quoteorama through the crowd – Campbell and co. launch into ‘Big Mouth’ from their 2016 debut EP, a punchy ode to an unnamed, lippy individual, with the feel of the Backyard Babies and Buckcherry at their most aggressive.

The Bastard Sons (formally the All Star Band) began playing sets of classic rock covers on the festival circuit, but quickly developed their own sound, equal parts groove-rock, metal-punk and grunge-grind. ‘Freak Show’, from forthcoming debut album The Age of Absurdity, showcases some of Phil’s best Brownstone-esque, wa-wa sleaze while EP track ‘No Turning Back’ is catchy and well-crafted melodic punk rock. For me, ‘Dark Days’ is a highlight of their original material: a slow burner like Soundgarden at their grooviest, on which Starr’s voice loses its occasional overly-clean quality with some much-needed ballsy gravel. 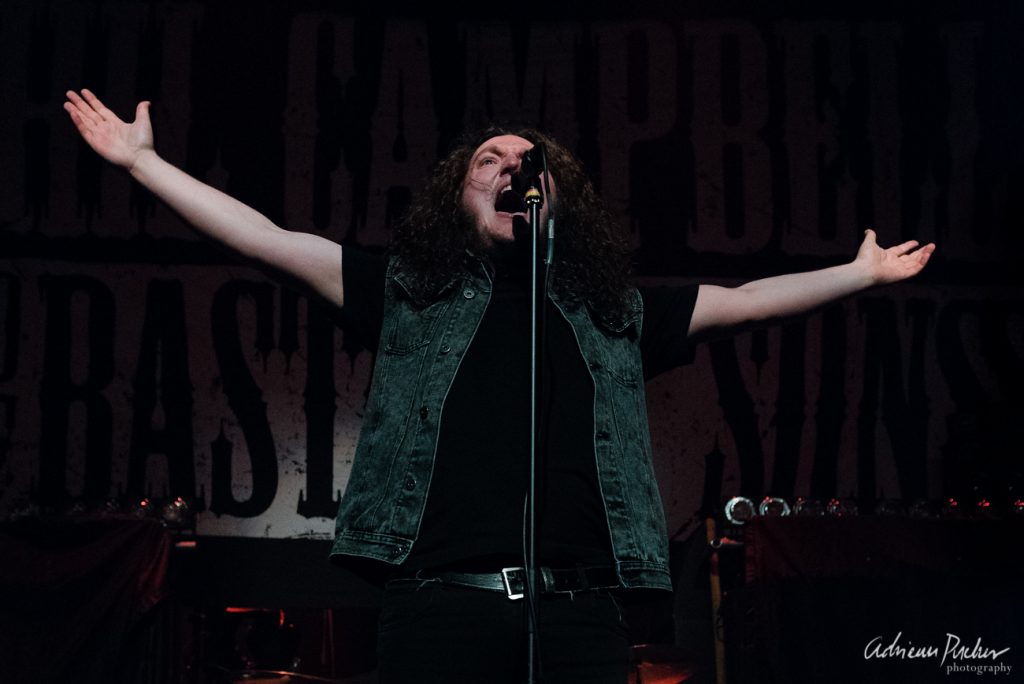 We got some Motörhead of course – ‘Born to Raise Hell’, ‘Orgasmatron’, and ‘R.A.M.O.N.E.S’; but while the chords are dirty enough, and the double kick underpinning is felt in the chest, it’s a fact that – let’s face it – no one growls like Lemmy. But that’s not the point: there’s no-one better to help keep the man’s music and legacy alive. Following a brief solo slot from Phil, The Bastard Sons dedicate Hawkwind’s, Lemmy-penned ‘Silver Machine’ to Phil Taylor, Bowie and the eternally warted man himself. If this gets the crowd jumping up and down, then the inevitable finale of ‘Ace of Spades’ – “everyone say Fuck You tyla Campbell!” – induces a full-on mosh pit, something of a rarity at the Roundhouse in my experience. 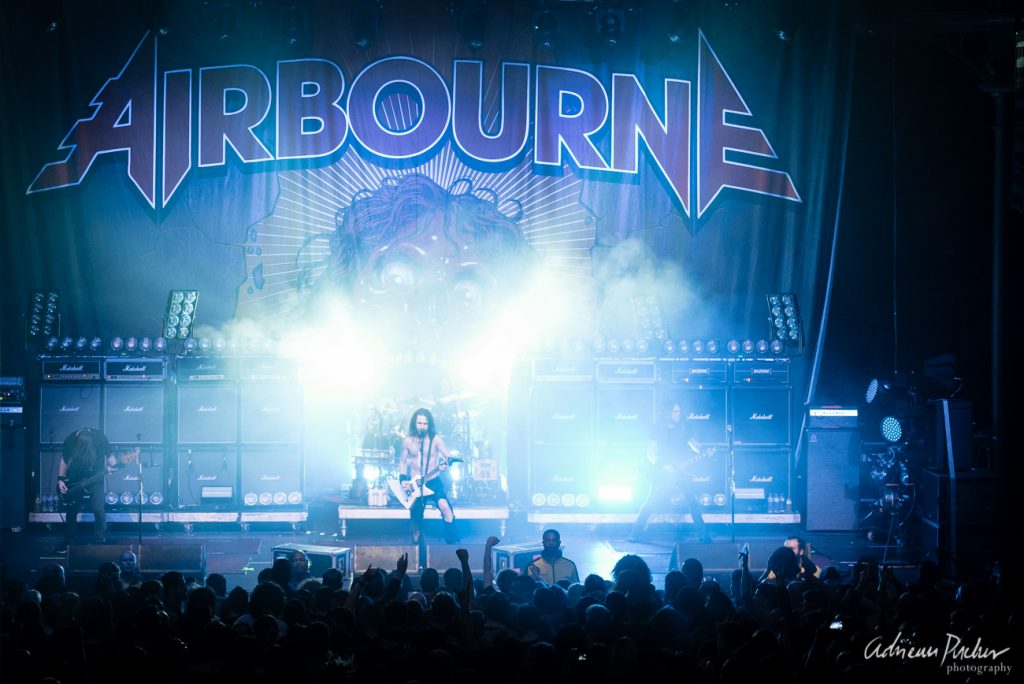 In an effort to out-geek each other with their intro music, Airbourne bound onto stage shortly following Brad Fiedel’s main theme from Terminator II – an effective if slightly incongruous choice. But as soon as the insanely catchy football-chant intro of ‘Ready to Rock’ strikes, and the crowd goes all World Cup on us, it’s clear there will be no time for dystopia or time travel paradoxes this evening, just mindless, upbeat hedonism. While Airbourne’s music may not be as smart as James Cameron’s film, damn is it big, with sharp, Marshall-fuelled power chords cutting right to the back of the hall. And Joel, Airbourne’s lovably-hyperactive frontman, is not so much ready to rock as constitutionally incapable of stopping, playing every single song as if it’s the last he ever will. When at the mic, you’re transfixed by the sight of his left leg thumping up and down frantically to the beat, knee exposed through ludicrously ripped jeans. When he’s not he can’t stand still: kicking scissors in the air like Eddie Van Halen; double-thumbs-up and shit-eating grin; flashing the horns; cracking tinnies open; and taking solo spots, Les Paul bo(u)rne high into the air. 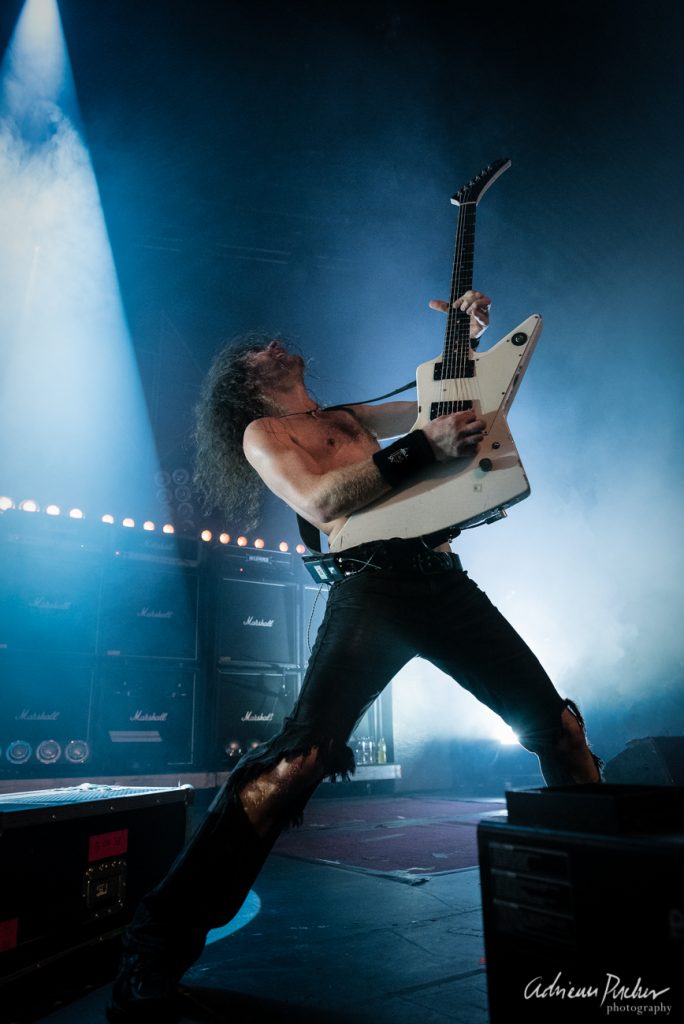 Tonight, Airbourne bash through around thirteen songs, spanning their four albums to date and prioritizing 2016’s Breakin’ Outta Hell. That’s eleven years of material to play with. Now, I set myself a challenge for this review: see how long you can go without mentioning AC/DC. Well, it’s been a few paragraphs. It may be the biggest cliché you can utter about Airbourne, but it’s true: they sound a lot like Angus and co, and have done right from the start. Staccato riffs with open power-chords; big 4/4 rock beats; no-brainer, sing-a-long-the-song-title choruses. It would be harsh if fair to say that Airbourne are scraping the ‘Bottom of the Well’ with that song’s intro, the distinctive double-stop pattern of which is pure ‘Hard as a Rock’ and the chorus a lot like ‘Shoot to Thrill’. But, as Joel informs us, they’ve just been to fackin’ Zagreb, they’ve been to fackin’ Germany, they’ve been to fackin’ Mexico, they’ve been back to Au-fackin’-stralia, and now they’ve wound up in fackin’ London town. Having smashed their way through this 18-month world tour, do you think they have any shits left to give? The thing is, it doesn’t really matter how original they are because it’s done so well, all delivered with such genuine youthful jubilation and passion; it still manages to sound fresh and exciting enough to win over even the most hardened of rock cynics. 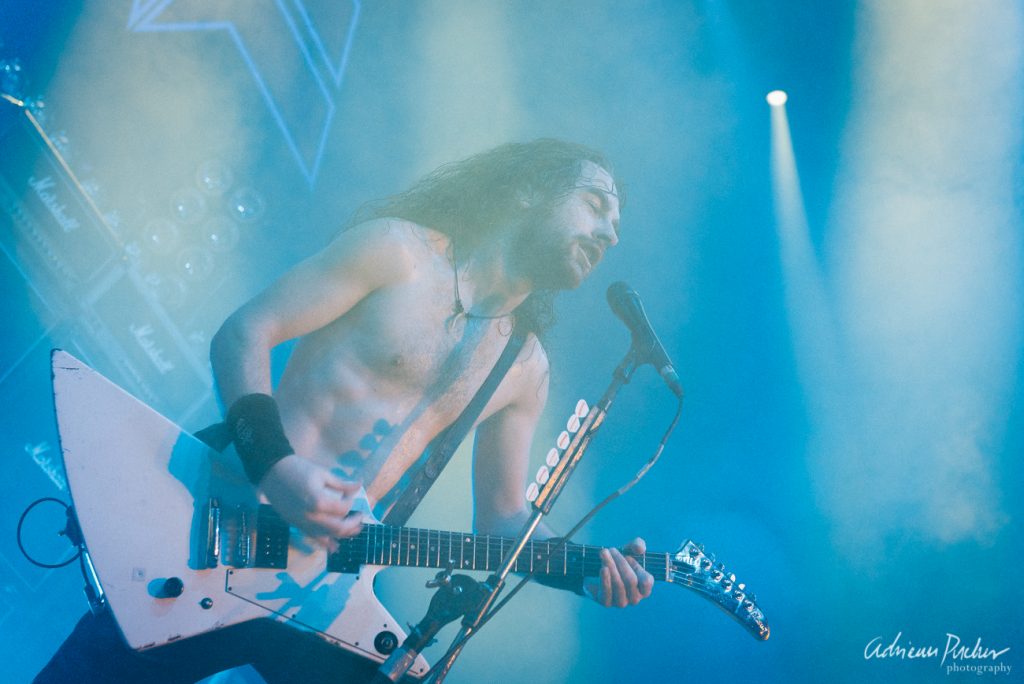 Airbourne – Still ‘Standing Up for Rock n Roll’ even after 18 months of touring. Photo: Adrienn Pucher

Tonight, the crowd certainly matches the band’s energy throughout. We’re all ‘Breakin’ Outta Hell’ via the medium of shirtless crowd surfing. We’ve had ‘Too Much, Too Young, Too Fast’ but we can still frantically pogo-bounce when the time is right. It becomes abundantly clear that we’re going down, down, down, babe, we’re going down – but not without lobbing £5 beers at each other first. Airbourne’s ode to rebel solidarity, ‘Stand Up For Rock n Roll’, gets easily the biggest cheer of the evening. Again dedicated to “Mr Lemmy Fackin’ Kilmeister” who is “still rockin’ this planet”, there’s something pure and glorious to hear over 1,000 people shouting “all for one, one for all, it’s all for rock n roll” that makes you forget how ludicrously cheesy it sounds out in the sober light of day. Only Airbourne could get away with wheeling on an amplifier flight case sprayed with the legend ‘Lemmy’s Bar’ and start dishing out JD from it to the crowd. “Who’s thirsty?” Joel asks, “Have a little of the sweet shit, yeah?” 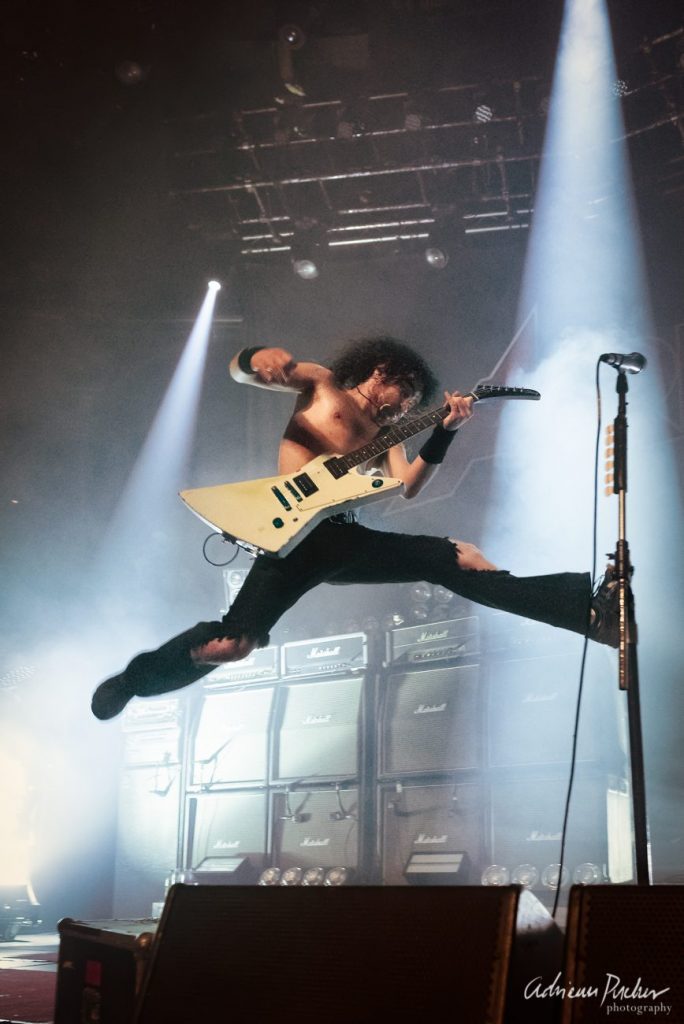 They’ve a few more gimmicks up their denim sleeves for the encore: lights go down, air raid sirens begin, and the drummer elaborately winches up a podium, from which Joel slams into their hit ‘Live It Up’. It’s the kind of song that has instigated mid-life crises all over the globe, making you think again about busting out the leathers, getting that motorbike and maybe even that perm. While he’s really been the centre of attention since the first song – the other members just doing their thing and rocking damn hard – it’s certainly The Joel Show by the time they’re playing the finale track ‘Runnin’ Wild’, and his energy only seems to have increased. At some point Joel tries to break the record for most people airbo(u)rne onto other people’s shoulders: I counted 30. “Let’s play a little game,” he announces at one point, but I’m not entirely clear of the rules, beyond shaking up tinnies and throwing them around. By the time it’s almost lights-up, the show takes it cues less from T2 and more The Lord of the Rings, with a seemingly-endless series of false endings before – drums rippling over the kit, bass tremolo-ing, frantic blues-scales soloing – that one, humongous final chord means it’s time to toddle off into the night, wiping beer from ourselves, smelling as dubious as my puns, and wondering why anyone ever bothered to write rock ballads in the first place. And that maybe I will get that motorbike… 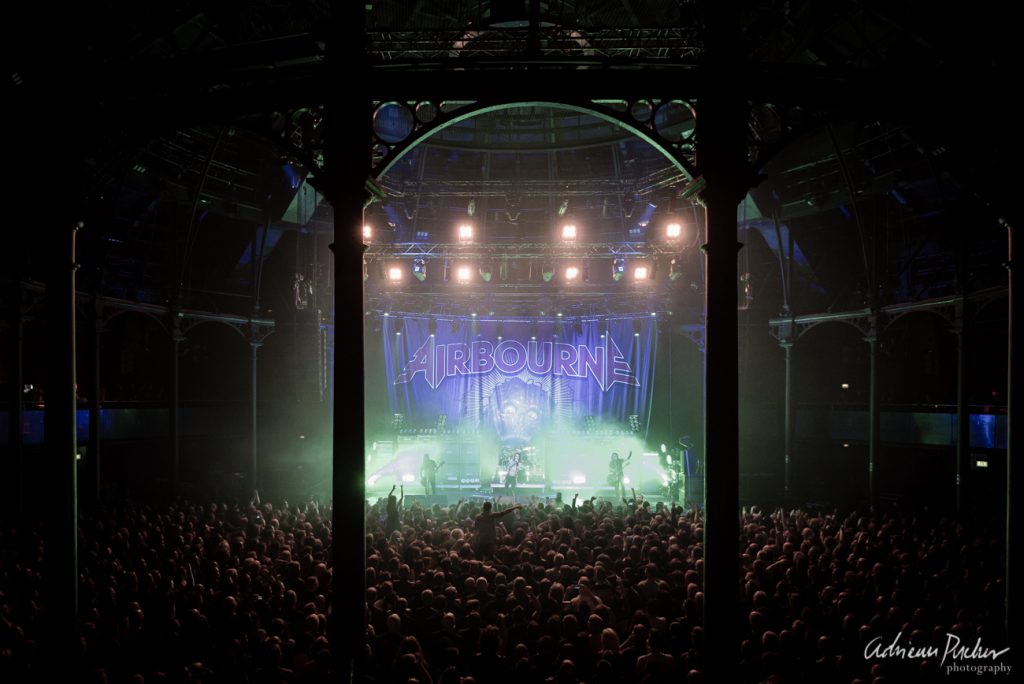 None of the music played here tonight exactly tears up the rulebook. But if you didn’t enjoy it, at least a little, then you’re a fackin’ dipstick (mate).