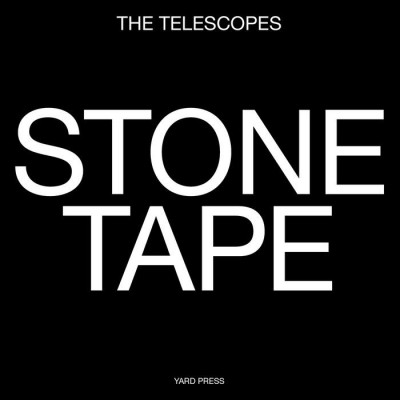 Stone Tape by The Telescopes

The Telescopes have been around in one form or another since the late 80’s. They initially seemed to fit in rather well with the psych and shoegaze bands of the time. I remember them for their first album, Taste, which may indeed have fitted in but had a savagery to it that was quite singular; the songs (and they were songs) were struck through with terrifying sheets of guitar noise, which had an altogether more malicious intent even than that of the most obvious competitors on the ‘oh my God my ears are bleeding’ front, shoey touchstones My Bloody Valentine.

After that they softened, and went a bit more dreampop, fading away from my consciousness. It was with real pleasure, then, that I learned that not only were they still extant, but that they were very much all about real psychedelic exploration. Not a tribute band to themselves, but instead a label for Stephen Lawrie to wage war against the ego with a variety of collaborators, live and on record, since reviving the name in 2002. Where Ride went so far down the sewer of trad rock that it didn’t seem that odd when Andy Bell ended up in Oasis, Lawrie hasn’t been following any tracks but his own. A set at Liverpool Psych Fest earlier this year was an enveloping, droning, thrummingly heavy headtrip. And here is a new album – their tenth, and the second this year.

The press release makes little of this creative fertility, but as is often the case when bands relese two records in such close succession, it makes sense to listen to this record as very much the companion to July 2017’s As Light Return. That album was absolutely about guitar abuse; amplifier worship, feedback and a very rock approach to annihilation.

Stone Tape, by contrast, is quiet, delicate, even elegant. It is, apparently, a concept album. The idea of Stone Tapes is popular among those who like the idea of the paranormal; the hypothesis being that stones and buildings absorb energies from living beings, and play them back later, causing the experience of ghosts. The idea is attributed to Julian Cope’s icon T.C. Lethbridge,; I came across it via a 1972 BBC Christmas Ghost Story, recommended for fans of Quatermass and the like.

How that plays in with this music is anyone’s guess, but I promise not to say ‘hauntology’.

We start with electronic drones, faint whispers. Something that sounds like an accordion or hurdy-gurdy, adding another drone. Violin is layered in. It’s all recorded with a beautiful clarity. Suck a pin-sharp production that we know for sure that the vocals, muffled, obscure, whispering and hinting, are no accident.

‘The Speaking Stones’ layers sitar drone with another electric hum; as we move on from here the pieces moving closer to actual songs. The Desert In Your Heart goes out on a limb with an actual chord progression, mirrored by vocals that

‘Everything Must Be’ leans in slightly more towards what you might expect from the Telescopes, being built upon a bed of feedback. This is tense-but-gentle, a grounding, a surrounding hum, not ear-screeching mayhem. It’s married with plangently treated piano, and so inevitably brings to mind Sonic Youth’s ‘Providence’. This has a song structure, though – barely – it’s not just a noise collage. I’ve probably grown into this track more than any of the others, which has surprised me, since at first I wasn’t sure we needed this when we do already have ‘Providence’… But Lawrence has been quite clever here, the way he draws the listener into and through the track.

‘Silent Water’ is a gentle acoustic track – upskittled and disturbed by a strange electronic pulsing.

‘Dead Inside’ brings back the organic drone, married now to another acoustic strum and another rudimentary vocal melody. This time there is the plucking of a banjo-like instrument and then – aha! Loud distorted guitar, with appropriately howling feedback to carry us to the end. Lest we forget the name on the album cover.

An album of extreme simplicity, on first listen, which presents sounds and instruments combined together into simple layers. But it opens up on repeat listens, drawing us into a soundworld that is refined and elegant, but with a tense heart beneath, like all the best psych.