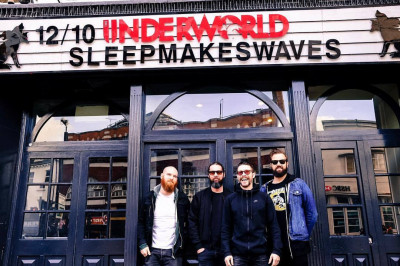 Sleepmakeswaves at The Underworld, Camden, London

It’s difficult, one suspects, for gig promoters to come up with line-ups that work, that complement one another, but that also don’t repeat what has gone before. Consider then the plight of putting on a post-rock gig in London. It is, I imagine, impossible.

Don’t get me wrong, this line-up is enchanting and exciting, but the majority of the audience as I walk amongst them, cheerfully chatter about having seen all three play at the previous ArcTanGent iteration. I wasn’t there so hey, it’s new to me; and hey, these guys have come along, so what the hell am I grumbling about. Nothing, probably – but with the constant expansion of festivals and those (fabulous) festivals growing and becoming more ambitious, this sort of gig – three pretty big hitters – seems to become rarer and necessarily so (it’s simply not as ‘remarkable’ as it would once have seen to have been). Blah, blah, blah. Moan, moan, moan. Now that that is out of the way, let’s bring ourselves to the evening’s openers Vasudeva.

Hailing from New Jersey the four-piece are a three-piece tonight. It’s not really addressed, but they are missing their bass player, and have his play-through from their tracks playing through the backline. As there is no explanation for his absence, one can only speculate, but one thing is for sure: there must not have been time for someone to be quickly recruited to play with them and learn the parts. It’s a shame, as it certainly effects the sound and overall performance. The members of Vasudeva soldier on and are consummate professionals on the night, but one can’t help but wish that they could play at full power. The post-rock comes with a distinct math-rock edge and has enough personality to it, that it is identifiable from the huge swathes of acts currently deploying this sound on stages around the world. That said, it is hard as a regular gig-goer to really be taken aback by their brand of instrumental bombast.

They do, at times, create real intrigue, and it is positive to reflect that these moments often come from new album No Clearance. ‘Turnstile’ in particular, captures the attention of the fairly small crowd currently in The Underworld, and really starts off the night. The band are clearly delighted to be playing in London, with a patter to the audience that includes numerous appreciative ‘thank you’s and talking about how “insane” it was to be back in the UK so soon after their previous tour, and how much they were enjoying part of the tour with sleepmakeswaves. This is immediately endearing, but is somewhat undercut by the ‘technical guitarist’ of the group looking in discomfort for the majority of the second half of their set – a pained expression on his face, a sudden disinterest in engaging with the crowd and a rather over-exaggerated wrist melodrama after the last notes of every single song. This aside, the band are a quality outfit that clearly have skill and what it takes to lift a room of post-rock fans and create a sound that is different enough to make them stand out. That, at times, they allow themselves to wallow in rather more by-the-numbers musicianship is of concern, but it felt like reflecting on the past (their debut record of four years ago), rather than where the band truly are now. A third album, building on the inventiveness and catchy nature of No Clearance could be really interesting.

By the time UK wunderkinds, The Physics House Band come to the stage, The Underworld’s audience at the stage has at least tripled. Not fans of keeping to one time signature for more than a handful of seconds, the band propel themselves into a dizzying set. If you close your eyes, you would surely guess the band was (at least!) a six-piece, but upon watching – and however one cranes one’s neck – they are and remain a three-piece. There is an instant rapport with the audience that Vasudeva lacked, but this is easily explainable by them having an obviously larger following, especially being home grown. The band, as alluded to before, are technically amazing – jaw-dropping, in fact. With a big psyche influence that always reminds me of a less heavy Acid Mother’s Temple [this is often fiercely debated!], the band rattle through a number of crowd-pleasers.

With a very prevalent, unique bassist who often leads the band, and with the bass riff sometimes the centrepiece on which a track is structured, The Physics House Band have certainly created an instantly recognisable and niche sound in a scene that is one in music that is perhaps most susceptible to utter cliché and beige blandness. The irony is that although interesting, it is sparingly enjoyable. The band – name considered – are perhaps an academic curiosity. They prove time and again that a band can do this if they want. Whether they should or not is another matter, and the unwavering desire to wrong foot the listener becomes, at times, cloying. There is no doubt at the technical ability, the blinding brilliance of the musicianship, but the band lose me at times. To these ears, it felt like each track needed more room to breathe. However, as stated, the band are spectacular at what they do, and a rapturous audience bouncing and seething in front of The Underworld’s stage are clearly loving every minute of the set, so what the hell do I know?!  They’re not for me, but on reflection, it seems that this gig almost morphs into a dual headline show, such is the fervour and love for the Brighton trio. The pile of this year’s album Mercury Fountain has done a disappearing trick shortly after their set, leading me to believe that despite my thoughts, 2017 has been a pretty strong year for this still young band.

The Australian quartet come out onto the stage triumphant. From the first time I saw them at Cult of Luna-curated Beyond the Redshift festival in 2014, playing to a relatively small crowd in the smallest of the three venues, the band have come a long way in three short years, now stood in front of a packed Camden Underworld. They are genuinely shocked, delighted and appreciative of the massive crowd. It’s surely as close to sold out as it could possibly be without a sign adorning the front turning away hopeful fans.

As the band begin their glorious set, it is worth contemplating what makes sleepmakeswaves tick, and why they have become such a success. It is actually quite simple. The focus of the band seems to be the utter unbridled joy of playing live and enjoying being in an internationally touring band. They seem beside themselves to be playing in London on a Thursday night in a packed rock venue. It’s really easy to forget in the melee of touring, of releasing albums and of the nonsense that occurs for bands, labels and the whole music industry, that this – touring around the world – is so incredibly cool, an unreal opportunity, an incredible experience to be savoured. How many bands forget this simple extraordinary fact and happiness?  This band clearly aren’t taking anything for granted and they infuse their music and performance with it, bringing that stunningly across to an appreciative audience.

A running theme of this review seems to be the bass – be it sadly missing or the pervading musical linchpin in a band’s sound. Similarly, bass is central to sleepmakeswaves. Their bassist, Alex Wilson, is the only remaining founding member, but more than that is sleepmakeswaves’ talisman. The other members orbit him, dancing, bouncing and headbanging in concentric circles. With a metallic crunch he is often the difference that allows the band to transcend the post-rock blueprint. They sound like an urgent Explosions in the Sky, and if that band rediscovered their impetus. Post-rock bands can often feel like they have a sell-by date, but – so far, at least – sleepmakeswaves have marked themselves out as a band who avoid this through a very simple trait: they’re having real fun, and some other bands simply aren’t.

Unlike many bands, too, they have over time endeavoured to compress their sound, rather than begin to splay and section it further, autopsy-esque. With a scalpel, they have extracted the essence of what made fantastic tracks incredible tracks and left only that remaining. Take the roaring ‘Tundra’ that announces an even quicker tempo to their set during the mid-point, taken from their latest, excellent album Made of Breath Only, that also gives its’ name to this tour. It is a short, sharp burst of post-rock swell, that evokes the bitter winds and cruel changeable but always unrelenting weather of the tundra, but never overstays its’ welcome, trying to overly describe the scene. Its’ brevity transforms it into that bitter punch from the elements – any longer and it would lose its power.

The band finish with the audience entranced and the sound of cheers and clapping almost raising to the volume of the guitars who have just delivered the set to which this applause is directed. The band march off the Underworld’s stage as triumphant as they entered, safe in the knowledge that they had fun, before us, but that we – obviously – are delighted. A band on top of their own world, and of ours.