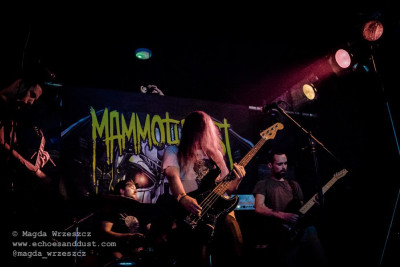 Sunday: out of breath and sore of leg I rushed into the Arch just in time to get a drink and watch Wren set up. Firstly, I must apologise to them for saying Auburn Rule was less metal, for this set drew only from that album and was not short on aggression. In a short half-hour set they couldn’t get through the lot but I think we got the first four, closing with ‘Traverse’ which really showed off the tone they can wield, as well as the precision percussion over all those rolling fills that keep the later parts teetering on the brink, a wave about to break. Yes, I was excited about them in advance, and they got a boost from being first band I caught, but there wasn’t much else this day that got me going to such an extent. Front and centre. All too soon they had to end and, festival-style, were hustled off to keep the day moving. I got a chance to nose around the venue, get my bearings and have a regretful think about the bands I’d missed while charging down here from Bristol. Kurokuma and Haast’s Eagled seem to be bands I’m fated never to see, but we metal warriors scorn fate, and it will happen one day. But wait, there’s a festival happening. Quick, to the music!  Upstairs in the little peristaltic vault of the Rikstock Stage I caught a little of Negative Measures, very young faces for a big event, setting out the stall for the event’s aim to showcase smaller bands. And what I caught was rolling metal with good hooks. Not something that was going to draw me away from the main room for long, but I wouldn’t be surprised if NM build something from these beginnings that leads them to other stages. 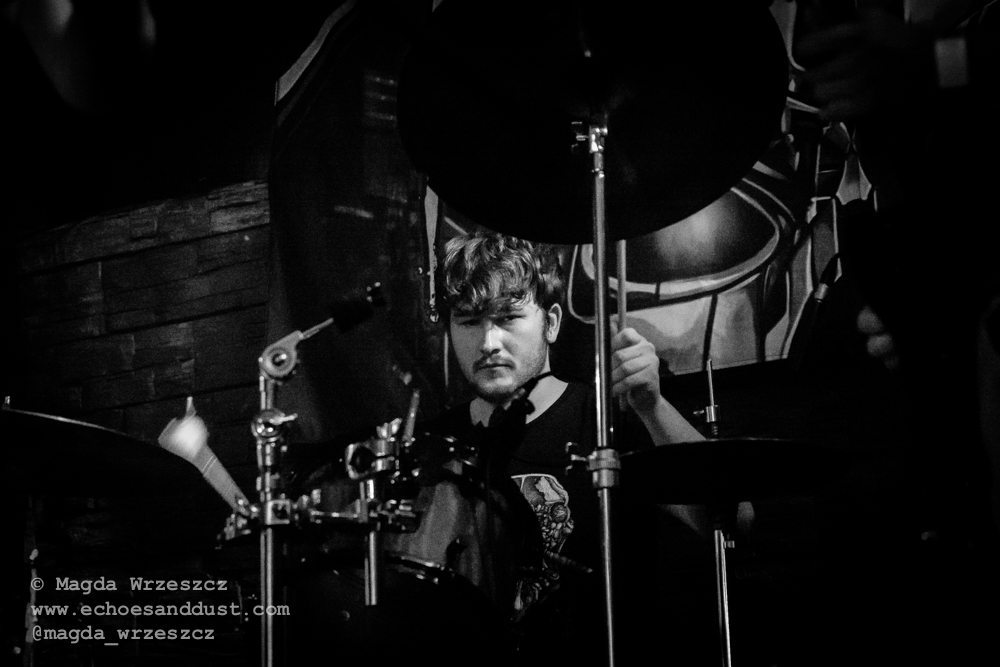 There was some buzz about Grave Lines; I’m an ignorant bastard sometimes but have been about enough to recognise that they’re at least some of Dead Existence, a band that I was often plugging to bemused friends, that I mourn the passing of, and that I feel never really got the attention their music deserved. Well, they seem to have decided to do a somewhat different thing – where did all the death and pace go?  No, Grave Lines deal in linear, epic doomery, each song slowly tightening the screws until we are in full metal mean-face torment. What they do bring from DE is the truly despairing, hopeless sound, but here it is paired with languid drumming and the skill to let the song breathe when needed. They’re a band that present well, and that wine-swigging charm may let them ride the buzz into greater things than the parent band ever reached. 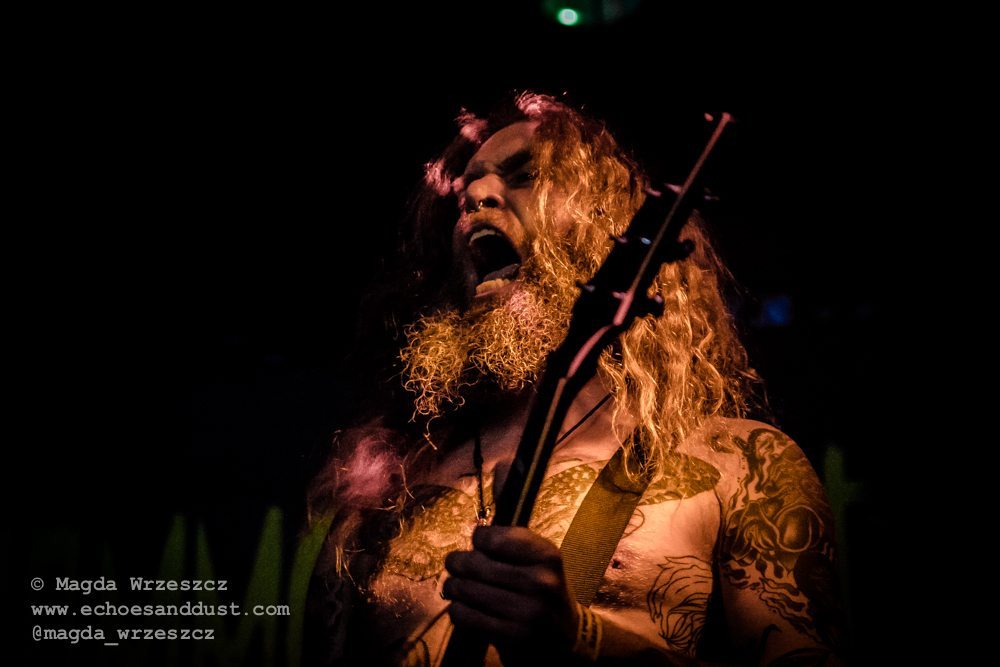 Keep moving. I dashed back to the upstairs tunnel to check out Operation Kino – that was a palette cleanser. F’kin having it they were, all over the room. Sadly, they were thrashing through their heavily stylised berserkathon to about ten people, but that seemed to be the fate of the earlier bands on the little stage. Again, lots of fun, other things to attend to – belly at this point. Time for chips on the beach and the seriously metal sight of the seagull hordes scavenging for scraps. What a beautiful evening, maybe I’m ready to stop hating Brighton.

So, what’s the event like? Classic dank, rock-club vibes, good loud sound, that thing of being among tribe. You step out of the venue onto the beach and miles of sea and sky. Rich colours of the sunset echo the Sunday night feel. Sound of the waves and walking feet on the shingle. Lots of tired faces and it’s less busy than yesterday by all reports. Perhaps the main draw is the more extreme stuff on the bill Friday and Saturday. The main room bands had a decent crowd throughout and things were getting busy by the headliners. The venue was on that third-day desperation, but things still seemed to be running smoothly, no queues, no hassle, just bands.

I hear promising noises from inside, dragging me back out of the view and my notes, it’s Telepathy and maybe I shouldn’t be pre-emptively dismissive on the basis of one gig where the sound wasn’t right and I wasn’t in a good mood, as that’s my only other exposure to them. This sounds good, much more body to them than that other time. You all know Telepathy right? They’re a UK post-metal instrumental band, and very well respected. However, although not being shut out by bad sound I was still broadly alienated by their vibe; somehow, I wasn’t going with their dynamic flow; maybe they’re big on formula and short on inspiration, maybe it’s just not my bag; sometimes the progressive thing loses me. I stood talking to myself about it for a while and in the end thought, fuck it, isn’t there a grotty death/grind band on somewhere? 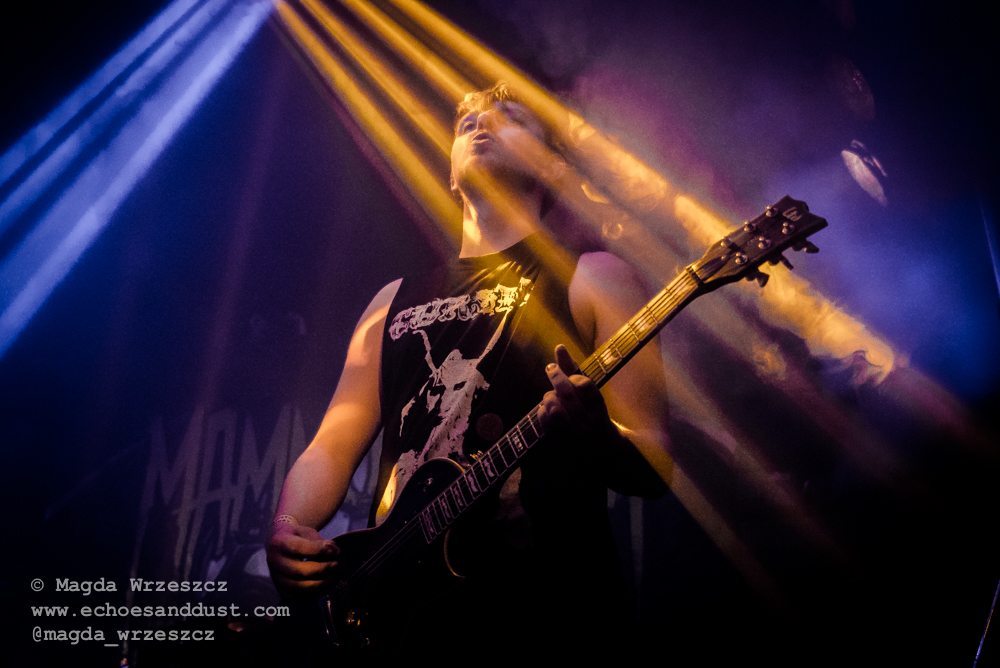 Oh yes, there is! It’s Enslavement upstairs. Locals living it up, and here is plenty of formula in the shape of brutal, guttural death with grindy bits, but with the scuzz to endear themselves to me at once. It may be enough to let you know that they closed their set with ‘Faecal Matter Consumption’. They did feel a bit like they’d escaped from Saturday, where all the death was supposed to be, which gave me a little regret that I hadn’t been able to get down to Brighton the day before. Indeed, after seeing Dragged Into Sunlight back home on the Friday, I would happily have driven three hours to see them again the next day. As it appears I like watching this sort of thing in dank caverns it feels that it would have been worth it. Lesson for next year.

Is there something completely different? Yes, there is – downstairs Patrick Walker is setting up with his acoustic guitar and a violinist. OK, so there’s some distortion on the guitar; but what he has in mind for us is some earnest folking. Just songs, sung direct and fearlessly by a man not afraid to be exposed one the stage. His songs are not my favourite thing ever, but there is clearly craft to the writing, and he really means it. Maybe the pedigree of 40 Watt Sun and Warning gives him the confidence to do this in the middle of a day of heavy-heavy; but watching him perform I feel it may just be a confidence in the songs as a communication of something that wants saying. Plus, as he quips, it’s a rest for the eardrums. 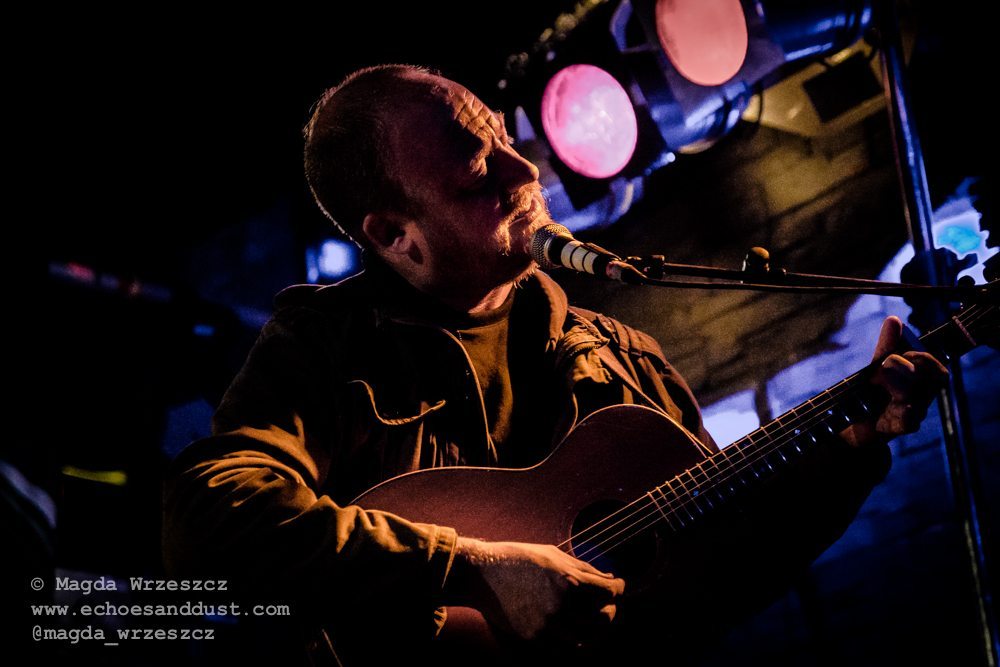 OHHMS – they’re a funny old lot aren’t they? Front man who stalks about doing his Ozzy, a writhing bassist at full-power abandon from word go, and an endlessly restless wandering in search of melody and groove. My hunch is that few in the crowd are with them through every moment of their set, but we are definitely in rather than out. Their noise-out is of the highest quality, and energy and fearlessness carry the set. There’s a joyousness too, and surely this music should be celebratory, even when exploring the dark. 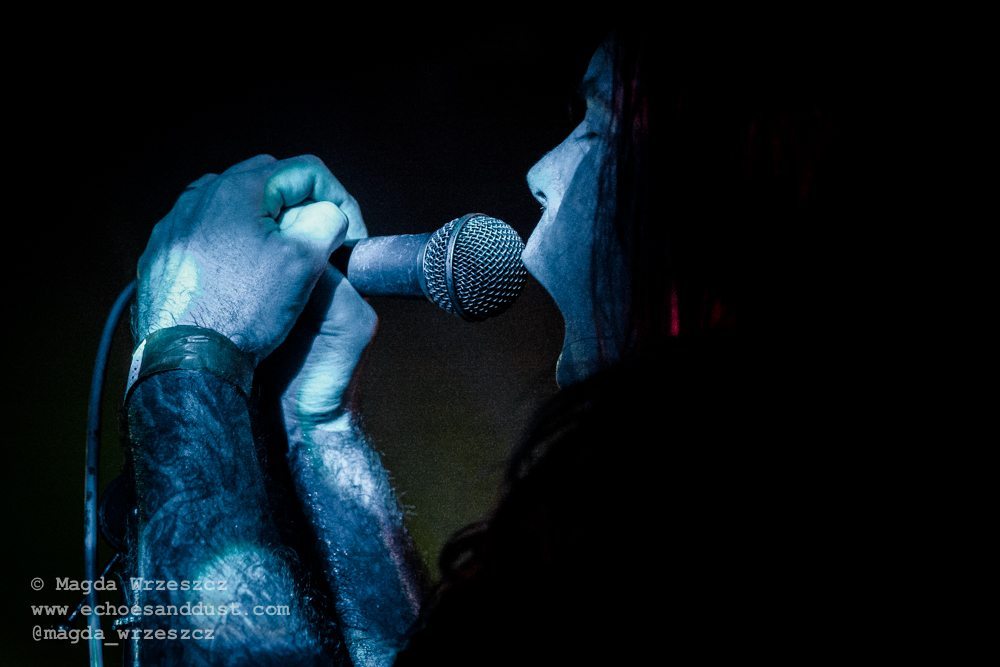 A joy that carries us through to Vodun, who teach us to rejoice in possession, an old lesson for anyone truly moved by music perhaps, but it seldom hurts to speak things. What was my grumble about them, I’m sure there was one. Oh yes, they have no bassist, as I discussed at length with Zel after their Bristol gig (sorry!). Now, I’m always going to be hard to convince that you can get by without a bass, unless your sound is meant as a treble punk-thing, but if you start having problems as a result then I’ll be all over it. And I think that’s where this three were at this night: Matey has a versatile style and some octave effects that let him fill in low frequencies, but the set was marred by looming feedback through many of the heavier sections, and my best guess was his bass emulator was the culprit. Both the band and tech crew seemed unable to do much about it, so they pushed on, driven by the percussive push from the kit and Chantal’s selection of instruments. Not everyone shares the joy of their sound – Grumpy Gig Companion for instance; but I’ll go with it asthey wind up into an ecstasy of superb vocals, riffs (with a metal edge that was missing from their set at the Trinity), and killer tom/kick-drum attack. The sound was again big and aggressive and energy overflowing into those of the crowd who could dig. 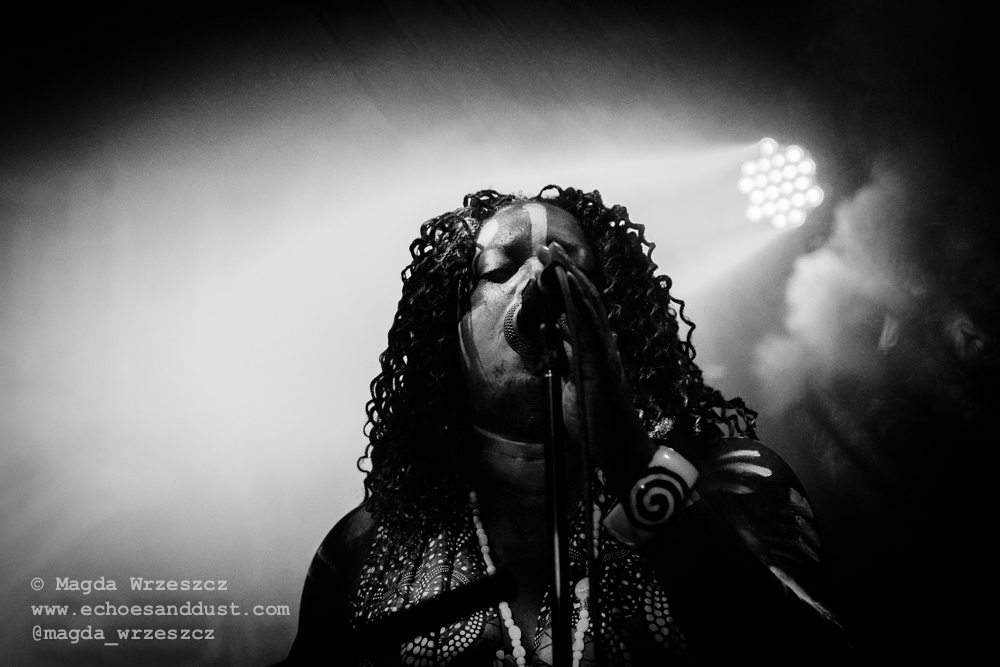 Which left, for me, only Amenra.

Not much joy in this world, although to share in the catharsis is a relief of sorts, and a possession of another spirit. Colin certainly is a candidate for possession given the sounds that come from him over the course of the set. Strange that I don’t really get on with their stuff on record, and that I have them mentally filed on the cerebral/clinical axis, for this is rough and tough, and plugs straight into my bleak and nihilist pleasure circuits. There’s an extremity and a ruthlessness that could stand with Dragged Into Sunlight [sorry to go on!] although the closest stylistic link for the day is certainly Wren. They tuck into those gut-punch riffs, and my fanboy-friend is full of “it may not be original but…” equivocation, but I’m not looking to put this down by pointing at predecessors. Amenra have enough history themselves now to be their own thing, and that’s where they hold us tonight, all old and vicious material. With a new album coming, some may have hoped for a taste of the new stuff, but I think they’re holding that for a release showcase; maybe this is a last blast of some oldies before they have duties to the new material. Anyway, is there likely to be any compromise of this sheer heaviness on the new one? The set does not seem to ebb or flow; we are in, and punished, and it goes on until they are done. Maybe there is time for a little more, and a little more? The reluctant crowd eventually takes the hint, and a member of the Mammothfest team clearly saying on stage that there will be no more bands finally seems to get the message home that all is over. They’re tired and have just made a festival work, and doubtless still have a pile of work to do. Wearily we consent to leave, but the energy we have shared pushes me up the hills from the sea onto the downs, where there’s a place to rest. 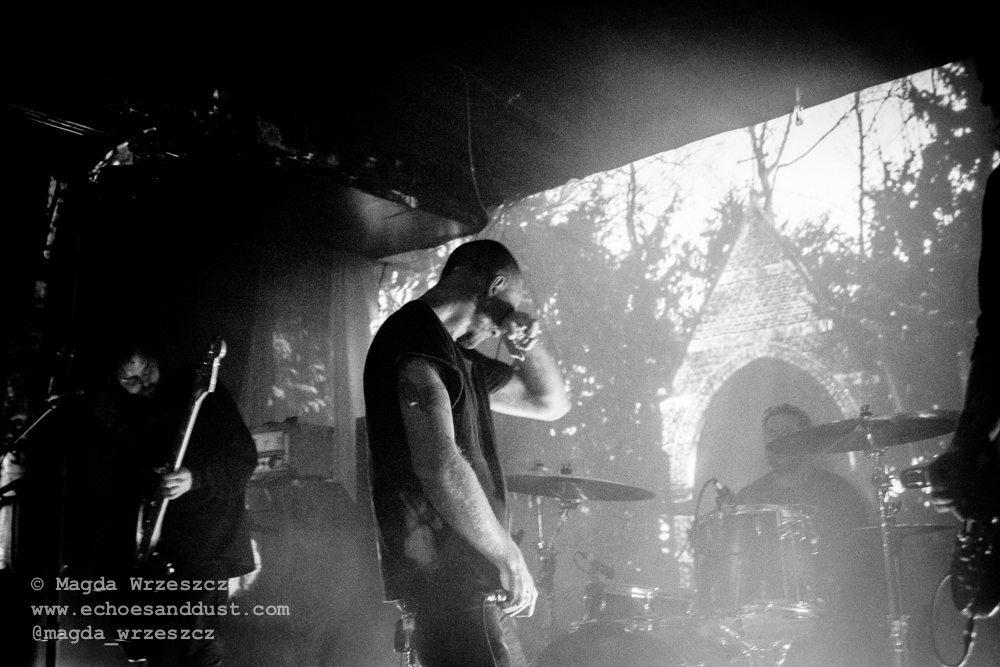 Amenra – and the coolest man called Colin in the known Doomiverse…

Next year maybe? The proof is in the line up, but I’ll certainly have it on my radar, and I’ll definitely consider making it more than one evening. Spoilt for choice we are.