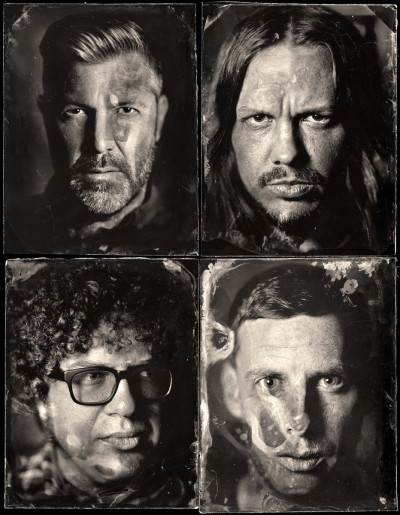 The purpose of each song is to crush. Crushing and smashing, and moments of melody that are brought in to lull you into a feeling of security just to crush and smash you again.

We managed to catch up with the members of Low Estate, a supergroup made up of Brendan Tobin (Red Sparowes, Made Out of Babies), Jimmy Hubbard, Geoff Garlock (This is Year One), and Chris Todd (Sannhet). They just released a killer album (reviewed here), which we loved and kind enough to answer lots of questions about it.

E&D: Could I get a bit of a history on how everyone got together?

Jimmy: All three of our old bands played a record release show at Saint Vitus together. I have always liked Tobin’s projects and it was the first time I got to see Sannhet. I was blown away by Sannhet and I just got along well with Chris and the rest of the Sannhet dudes. Somehow, being friends we all just ended up starting a band together. Geoff and I knew we wanted to do another band together after out old band The Year is One stopped playing, and it just kind of happened naturally with people you like and respect I suppose.

Brendan: I remember it totally differently than Geoff, but as I am next to senile at this point it, all comes to me in dribs and drabs. I remember standing at Saint Vitus at a show and talking some goofy bullshit with Jimmy and Geoff and saying we should all do something together.

A couple months later I decided to move to Austin to pursue a business opportunity with my old bandmate (Cooper from Made Out of Babies). So we decided to record everything we’d done up to that point. It wasn’t until after I mixed it down here in Texas that I thought it was really something we should keep doing, so I keep flying up.

Geoff: First off thank you for the kind words. Glad you are digging it! Jimmy and I were in a band called The Year Is One that had kind of dissolved, but we had a conversation where we realized that against our better judgement we still wanted to play music. And heavy music at that.

Brendan and I started writing some basic skeletons of our first songs with some old riffs we had hanging around. As soon as we all got in a room together we realized how surprisingly easy it was to work together. It doesn’t happen that easy so you go with it when it does. It’s been magic ever since.

E&D: Could you talk about how the album was written, given that the band members are in separate locations (Austin TX, Brooklyn NY). How did you guys rehearse? Was the recording all done in one place?

Jimmy: Our songwriting process can be a bit tricky at times since we’re split up between Austin and New York—we’ll send each other ideas for songs or parts back and forth. We generally lock ourselves in the studio and grind for hours on end taking full advantage of our time together.

We recorded the album ourselves, mostly in Brooklyn (Brendan engineered it), and Tobin and I recorded all the vocals at his home in Austin. I had a lot of fun doing that, getting to work on writing the lyrics together, him forcing me to try and not be so metal. He has great ideas and had me try a lot of different things outside my metal comfort zone.

After recording the album, we passed off to Sanford Parker for mixing. I have worked with Sanford a lot in other visual projects in the past and we are all a fan of his work, so getting him to mix the album was great and totally added a different sonic element to the music.

Brendan: The album was written in short bursts. I would come up for a week or two at a time we would all sit in a hot box with carpet on the walls less than 2 feet from each other and work stuff out. I’d get home and edit stuff together and it would make the rounds and we’d all make changes to arrangement or changing parts. Then on the next visit we’d put it all together re-record it best we could and move on. This went on so that each trip would yield like 2-3 songs.

The recording, which I did all of, was also somewhat piecemeal. It was pretty ridiculous all of us standing in this tiny 15 square-foot room filled with gear, all being real quiet as one of us screamed into a microphone with four other people standing around.

Geoff: Brendan had moved to Austin about a week after we finished recording our first EP Blood Horizon. We immediately realized that we wanted to find a way to make this continue to happen.

We recorded all the drums and most of the guitars in Brooklyn then ended up doing rest of guitars, some vocals, and all the guest vocals in our practice space with a mobile rig. With the power of computers Brendan and I did all that little extra sweetening at the end that we could just send back and forth. Much like every aspect of the band, not the most streamlined but it works for us.

E&D: The album is really raw. At times it reminds me a bit of Long Island hardcore, and other times more like technical death metal. Could you talk about the influences of the record and how much was deliberate and how much was just the serendipity of people from different groups working together?

Jimmy: Honestly, there was nothing really deliberate as far as a preconceived “sound.” The only thing that was deliberate is that we were all friends, we were all music nerds and we all wanted to play in some type of “heavy” band. I knew all the band member’s different perspectives and influences would make the band heavy in a bit more of an atypical way.

Personally, I had been a fan of both Geoff and Tobin’s previous bands, so I knew what those guys liked to play and the things they liked to do sonically. Plus, I just really liked them as people. Chris is just an amazing drummer. He does some things rhythmically that are so intense, but are completely informed from by non-metal influences.

Brendan: We all have very different influences. None of us are small minded so we all draw from a pretty deep pool, but of course we have some common ground. I listened to a lot of Unwound and Big Black and Funkadelic, who were heavy as shit to begin with, but you take some of those bass lines and move the accents around and you have a circle pit on your hands before you even know what hit you.

Geoff: I owe a lot of that to the serendipity of different personalities working towards one goal. It is almost guaranteed that if three of us share one influence, then the fourth person will not be into it. So a lot of times a riff you thought would go one way ends up a completely different way because of the combination of musical personalities.

I also think the age we are all at, you eventually go back to the influences that started you in the first place. For me, I am always going to go back to certain Canadian/Great American Steak Religion bands and German/Per Koro hardcore bands, through the filter of 20 years of other listening and influences. Somehow I try to draw a parallel with the amount of New Age music and Genesis records I listen to influencing the pure mosh riffs here and there…but even I draw a blank on that one. I think ultimately a unified commitment to loving big riffs helps a lot as well.

E&D: The guitar work is really interesting in that it is very harsh, but not at all indulgent. No wasted notes. No fat. The Jesus Lizard comparison I’ve read about you guys makes sense, but you guys are definitely your own thing. Could you talk a bit about how you got there? Was there a long editing process? Did you start off wanting something that was kind of minimal as a way to accentuate the harshness?

Brendan: Because we had such limited time to work on things, the writing process was always about focus. Although our influences are different, we share a common objective. I also have never been a fan of noodling in any form whatsoever and I think that is why Geoff and I enjoy working together so much—there is little to no indulgence. The purpose of each song is to crush. Crushing and smashing, and moments of melody that are brought in to lull you into a feeling of security just to crush and smash you again.

Geoff: Thank you! I think a lot of that again can be contributed to having a guitar player who primarily played bass and a bass player who primarily played guitar. I am fairly plug-and-play while Brendan LOVES pedals, so we have a complete opposite in that aspect as well. Either way it means that I personally am not going to be shredding that much. I’m not sure either of us play our instruments “right” and that makes it all the better.

As for editing, we were pretty harsh. Even in our short times working together, there was always a restructuring of the song to make it interesting to us. Ultimately, though, the big riff is what wins out. Nothing is more satisfying than coming up with something that makes you all laugh because it is heavier than you thought it could be.

E&D: Are there any plans for a tour?

Jimmy: All our various commitments can be tough to navigate and schedule around. Garlock just procreated, Chris’s other band Sannhet recently just released a third full-length (which rules), and they will be very busy with some extensive touring next year. I somehow ended up back at Revolver, as well. I know we all really want to do some shows soon, especially some record release stuff. So, I am sure we will figure it out soon!

Brendan: I want to tour, I love tour. I love getting up and sweating my brains out and letting people see me have a cathartic tantrum. But these guys are all very busy. I have given some thought to touring with projections of the guys and playing to backing tracks, but I’m not sure many folks will show up to see an old fat guy in orthopedic shoes surrounded by a bunch of TVs.

Geoff: No big plans. We are older men with many life commitments, from jobs to comedy to babies. We are also men who have been on the road a fair amount so don’t need to sit in a van for five weeks at a time to prove something to ourselves.

That being said, we are trying to figure out the best way possible to use our limited time. We all love this band and love playing together and are trying to find the way to work smarter, not harder. Translation: we will be out on the road in limited amounts, so if we are coming to your town, make sure you come out because I am not guaranteeing we will be back anytime soon.