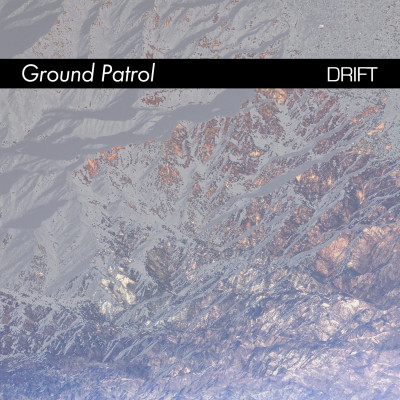 Every so often you get a piece of music that takes you out of your comfort zone. It’s unusual, or is difficult to listen to, or doesn’t immediately chime or fit with your expectations. But something tells you it’s important to persevere. That’s often when the rewards are greatest. The New York/Sydney duo Ground Patrol certainly don’t fit into any of the pigeonholes that I would name as what I’m ‘into’. But the video for the first track on their 4-track debut Drift, grabbed me. You can watch it below.

The video, for the song ‘Drift’, released as a taster for the album, focuses only on the parts of the musicians doing the playing. Very rarely does if show their faces or pull back to show them playing together. It’s just hands picking the melody on the guitar and the drum sticks hitting the skins. The track starts out with the bare bones of a rhythm and melody, and it builds slowly from there. As the seconds go by the pieces are put together, and the music is slowly crafted to reveal its final form. After 2 minutes the song is beginning to take shape, and the melody seems complete. At 4 minutes it peaks, with distorted guitar playing the kooky melody, tom-toms measuring out the beat and snare adding depth, leading to some sort of a crescendo. The video shows the song being built in this way, like Lego bricks being put together to make a complex sculpture. It makes the whole process very visual and it drew me into music that I might otherwise have dismissed. Title track ‘Drift’ is the introduction to this short album, and sets out Ground Patrol’s stall.

‘Scatter’, the second track, starts in a mellower way, less in your face. There’s contemplative notes from the guitar, and almost hesitant percussion that doesn’t start fully formed. The ebbing guitar sounds come and go, gradually building once more into an edgy brilliance at the end of 8 minutes. As equally rewarding as the more immediate title track, it’s by no means an easy listen. The same could be said of the glitchy ‘Budge’, which, if the previous tracks haven’t, definitely falls into the category ‘experimental’. The sounds of the instruments break up repeatedly and the instruments compete to be heard. Yet again Ground Patrol show their skill at building a song from the ground up, improvising a pathway from disparate fragments of sound to a more rounded whole. The song settles into an almost conventional rhythm after 6 minutes or so and a post-rock feel takes over, with the guitar soaring over surging drum rolls, followed by a brilliant fuzzy guitar riff. This shimmering section is definitely the most ‘rock’ and ‘conventional’ of the whole affair, a reward for working through the first half of the track. Final track ‘Roll’ has a similar improvised, jam session feel without the jarring edginess of earlier tracks. Also built from the ground up, it has a pleasing tone and sounds very jazzy.

Ground Patrol’s label, the Sydney-based Art as Catharsis, have brought us some amazing and eclectic releases this year from the progressive realms of underground music. Its releases are often challenging and always worthy of our attention, and Ground Patrol are no different. Worth the effort, Drift doesn’t let go of its gifts easily, but will reward the listener who invests the time to get to know this intriguing album.