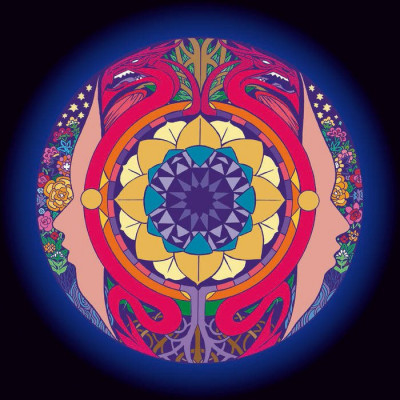 The Divine Abstract by Charlie Cawood

When progressive rock or should I say progressive music was becoming the hip words to use sometime in the late Sixties, it was essentially because rock musicians were starting to discover new musical worlds, while musicians from those worlds, like jazz and classical music were getting drawn to rock’s energy and general openness to accept practically anything that could be called (good) music. But then, when all three sides involved, the musicians, the music critics, and the listeners started to try too hard to codify the music they were experiences, excesses of pretentiousness, showing off and whatnot started to creep in. But that is something that all music forms are prone to. So what happened in the meantime?

In the meantime, some modern musicians tried to re-define the progressive genre and make it a free-form, accept everything that is good music again, devoid of excesses that made some progressive “works” so unlistenable, even laughable. Judging by his debut solo album The Divine Abstract, count Londoner Charlie Cawood among those positive revivalists. On it, he has been able to include quite a wide range of musical genres into a seamless whole, without any excesses, technical show-offs or lack of knowledge of the music style he is trying to portray. After all, Cawood is also a member of a truly psychedelic band Knifeworld and is musically involved with the classical choir Medieval Babes and world music oriented band My Tricksy Spirit.

That, and the fact that Cawood was able to enlist no more and no less than 20 other musicians to play his compositions on The Divine Abstract are just an indicator of the musical possibilities  that are explored on this album and that he is obviously seriously taken by all that have come in contact with his musical capabilities. On the other hand, the same fact of such a large group of musicians and Cawood’s fascination with Eastern concepts of “change, transformation and transcendence”, as is stated in the press release, as well as the fact that it took him seven years to conceive and make this album, were also possible elements that could have spelled and excessive disaster.

Fortunately, Cawood has steered clear of any of that. What he was able to do, was combine the elements of rock (with almost no use of drums), jazz, classical and world music (particularly Eastern, from India, to China and Japan) and come up with music with substance that concentrates on moods and structures and not instrumental prowess show-offs, something that is actually much harder to do.

From the opening sitar notes of ‘Shringara’, through the Far East-tinged title, and the ‘Earth Dragon’ suite, and other tracks in between, to the closing ‘Apotheosis’, through relatively languid tempos and precise, expansive arrangements and brilliant musicianship to boot, Cawood was able to express his guiding ideas without ramming them down listeners throats (ears) coming up with a truly enjoyable, almost exquisite experience. Even at moments when the music starts to veer towards excess, like in ‘The 32nd Path’, Cawood was able to safely pull from the brink of disaster, not detracting from the overall positive musical experience, making The Divine Abstract an album that can further help progressive music gain back full respectability.