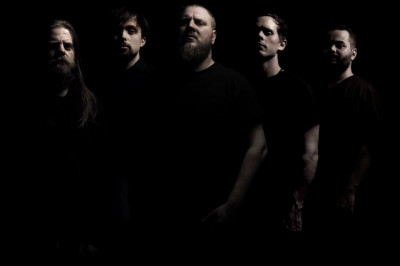 The demos of 'The Pardoner' sounded to us better than 'Miasmic Mutation', and that’s not a slight on that record, just that it this was all our work.

Before their recent show in Manchester in support of new Abhorrent Decimation album The Pardoner, Steve Fallows managed to grab a few words with Ash Scott and Dave Archer to ask about the new album, the new deal and what this means for the future of the band.

E&D: You’re doing a short run of dates for the album, how have they gone so far?

Ash: Yeah, were keeping busy at the moment. We’ve got a couple of proper tours next year, but right now the label just wants us to keep busy. We did Mammothfest and a couple of shows before that, we’ve got a little break after these two shows then we do a couple more. Just bits and bobs at the moment, just weekend warrior stuff until the other stuff gets announced.

E&D: There’s been changes in the line-up between the first album and this release. What do you think has changed about the band?

Dave: A lot. One of the people that left used to do a lot of the writing with Ash and obviously him not being part of the band any more is going to affect how we sound quite dramatically. As well, the people that are in the band now, we’re all a little more open to different things and different genres and maybe more modern things than we were before. We’re all happy to experiment more and do something that’s a little bit different. It’s given us more scope to be free with what we want to do.

E&D: The new album has a concept tying it all together, and it seems to have gone down really well. Is that a way of working you see yourselves doing again?

Ash: I don’t know. We were just saying how we want to keep evolving and we never want to release the same album twice. I think that with everyone we’ve got in the team now, every record is going to get a little bit dafter. We are going to keep experimenting and drawing influences from new places. I haven’t got a clue what we will sound like in three albums time. We are just really happy now and we enjoyed the writing process. We will try not to be too demanding and just see where it takes us. Just enjoy being creative people and see what happens. The first album went well, and it feels like this album has gone really well, so its really nice that the new team have not only taken the baton, but run faster with it. Were were confident in it, but it’s nice to see its so well received.

E&D: Last time I spoke to you, you had a very definite vision of the band and its future. How have those plans gone?

Ash: It’s going really well. I can’t say who yet, but in 2018 things will definitely take a turn for the better. We have signed with a manager now and we’ve got a booking agent with quite a big agency, so the next step is to move into the middle tier of bands. You have your underground, middle tier and top tier. I feel we are moving towards the top end of the bottom tier and now we want to break into the next level. To do that we need to be getting on bigger tours and play more festivals, and that’s where our new agent comes in. Again, like the creative process, same with our growth. We don’t want to rush things, we want to do things properly. It’s going at a nice and steady pace, and not just a flash in the pan, flavour of the month sort of thing. Hopefully we are laying down the foundations for a good future.

E&D: The Pardoner was your first album for Prosthetic Records. How has that relationship worked?

Ash: Really cool. They are really laid back people. We have three guys looking after us. There’s Duncan, Steve and EJ. EJ is just like a big brother to us. He really looks after us and gives us loads of advice. He’s driven to make everything he touches a success, so we are in good hands. Steve is our A&R guy and Duncan is our press and media guy and he is really good fun. We’ve met with him a couple of times in London and the whole things gives off a really nice team vibe. It’s been eye opening as well, a couple of things haven’t happened how we thought they would, maybe we just had a different idea of how it all worked, but it’s all cool and we are rolling with it and enjoying it. First album has gone down well, on with the next one.

E&D: I read that the deal came about when Trevor Strnad (The Black Dahlia Murder vocalist) gave you a mention. Is that right?

Ash: That’s exactly it. He posted a track and their manager is one of the owners of Prosthetic Records, so when he posted that track on their Facebook page, we had a couple of labels contact us on the same day. Prosthetic was one of those labels, EJ spoke to us and it just went from there. We messaged Trevor on twitter to say thanks because if he hadn’t have done that, we wouldn’t be where we are now.

E&D: It’s cool that there is a figure like that out there on the scene. I see him regularly posting bands on twitter.

Ash: He has his own column on Metal Injection too, ‘The Obituarist’. His constant plugging of underground bands is great. It’s great that someone in that position takes the time to help other bands.

E&D: In the same vein as Trevor pushing Abhorrent Decimation, who have you seen that’s really impressed you?

Ash: The one that I always talk about is The Infernal Sea, they’re my favourite band that I’ve had the pleasure of touring with. I enjoy their records, they’re really nice people and they work really hard and they’re just really good.

Dave: Yeah, I agree. Every single piece of success they get, they 100% deserve because they work so hard for it, they are always enjoyable to watch.

E&D: With all of this happening with the deal, has it changed the way the band operate at all?

Ash: I struggled with it all at first quite a lot. I controlled a lot of the things for the last record and tour. That whole DIY thing. As a band we did everything, going down to the post office to ship orders, marketing, planning, that was all stuff that I did, so I felt a bit redundant at first, but now I’m just enjoying being a vocalist for a bit. There was a big worry about handing over control. We all spoke about it, but sometimes you just have to embrace the madness and go for it. Trust new people and see what happens, trust them until they give you a reason not to trust them. It did change things. In some respects, it made my life easier in some respects not, but we’ve all enjoyed working with the label so far.

Ash: Having assets ready for when the album came out was another one. Archer ended up directing and editing the first video at the last minute to get it over the line in time because we had so much to do. With a DIY album, everyone pre-orders and that cash flow is coming into the band, whereas with a label you get an advance, and while it is a generous amount it just about covers most things, but not everything and without that DIY cash flow, it does make it difficult sometimes. We were tearing our hair out a bit because we had this agreement to get these three videos done. The only way we can generate money is to get out and play some shows, but when you’re trying to work on something else at the same time it can get quite conflicting. A few things lead Archer to doing the video, first of all we weren’t entirely happy with the video we did, and the other things was money. We just couldn’t afford to do another full production video.

Dave: It was nice to get the chance to do something that I don’t do everyday, very interesting to be involved in a different type of creative process.

Ash: I can see us getting to the point where we bring everything in house again, maybe even do our own artwork. On Miasmic Mutation (debut record) we recorded with Dave, but got it mixed and mastered by someone else. This time Dave did everything. We enjoyed the ride of Dave putting it all together and be able to have more input than we might have had with someone else.

Dave: For me it was a lot nicer to know that what we were doing at the time was exactly what we wanted the album to sound like, even if we did something and it was wrong, we would just redo it. Because of all the changes we had, it was important for me to be able to control exactly what we wanted for us and everyone else to hear. The second you bring anyone else in, it makes it difficult, not necessarily worse, just different.

Ash: Yeah, the demos of The Pardoner sounded to us better than Miasmic Mutation, and that’s not a slight on that record, just that it this was all our work.

E&D: Is video production something you want to do more of in the future?

Dave: Yeah. It was really good fun. I don’t have much stuff, but because of the way that technology has come on in recent years, you can produce really good quality material on quite basic gear.

E&D: You mentioned that there would be tours, what else do you have planned for 2018?

Ash: We have two tours that are to be announced soon, a UK run in February and a full European tour in March. Hopefully our agent will start getting us ramped up onto a few festivals over the summer and then just try to carry on from there. Maybe finish the year with a big tour, another support slot and then we will probably lock ourselves away and start work on album number three.

E&D: Is there no time limits to when they want the next album then?

Ash: No, they’re cool. It’s a three album deal and I think its industry standard to get a record out every two to three years so we’ll just play the game and see where it takes us. We definitely want to get something out in 2019, just so we can keep progressing and keep on track. We’re never going to rush anything. You never know, the next one could take two years to write.

Dave: It will take as long as it takes. We’d never want to rush something out just for the sake of it. We want it to be perfect and something that people will enjoy listening to and they will hear that passion that we have put into making it.