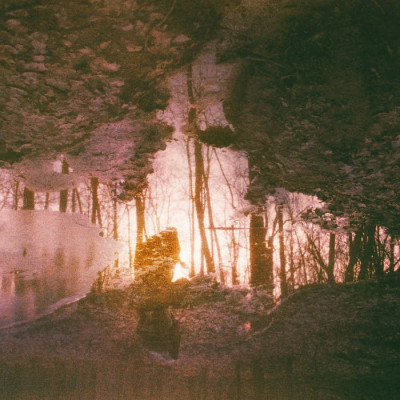 Now on their fourth release over three years, this is nonetheless technically the first album from Wren. The observant among you will clock that this came out back in July but somehow the summer never made time for this album. Maybe it was to fit with tour dates, or just the release schedule of Holy Roar that dropped it then, but I hadn’t yet sat down to listen to this despite a keen interest. Patience. For this is an album for the dark months of the year. Patience. There are tempting shortcuts to describe Wren, but I will resist them. Patience. Let the songs unfold.

Yes, an album for the autumn, for the heavy dampness of our winter, down to the colour palette of the cover, an obscure image that should perhaps be obvious. What is that there, reflected in still and cold water?  Something dim and shaggy, an indeterminate horror or some fellow mammal making its way through the trees? Or an inanimate thing, tricking the eyes into finding meaning?

The album opens with ‘In Great Yield’ – we could be immediately there, staring in that dead puddle as guitar layers establish the space, the push and pull of rhythm, patient. Without ceremony, bass and drums fall into step; lastly, backgrounded shouted vocals. A sense that we have arrived in the middle of things. There’s a skill in establishing a plodding crush that remains dynamic, and has room for delicacy without pulling back out of the heaviness. Where the tone fills out in the last third of this song there is a satisfying slackening but the delivery and production throughout is clean (not clinical), so as not to muddy the mirror surface of the water.

Yet there is some dirt there, bass tones have me grinning as darkness grows, some malevolent glee but this is serious business. And if there are reservations to be held maybe this is where they lie – the same woodland gloom hangs over the forty-odd minutes of Auburn Rule, and although the music is not monotonous we never leave the half-light of that place, trapped in sullen contemplation of a disquieting form reflected up at us. It works for me, but some may see this as a shallowness of songwriting, a mis-step in developing from the more abrasive and ‘metal’ songs of 2016 EP Host. Wren have not moved radically from that sound, there is no step into a ‘post-’ stage for instance, but this album is more consistently doomed. The precision of percussion and chug carries the ritual intent of their live set, balanced by a groove that lets us lift our eyes briefly, such as in ‘Traverse’ which cuts loose into a fine swagger.

To me this is a confident development of a UK band carving their own space in the heavy landscape, balancing earthiness and more lofty reaching. Stony-faced and free of posturing there seems little attempt to throw out hooks for the listener, and some will turn their backs on the woods and walk back out along the train tracks and up the lane to town. I’m curious as to what the band feel about the album, and what may be brewing in their future, as there is a sense that there are more visions to be conjured. Meanwhile I’m going to stay here and watch the mist rise.