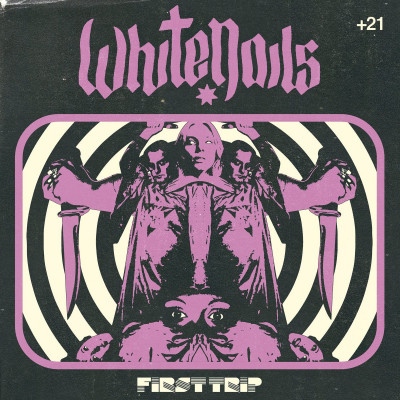 Quebec sextet WhiteNails debut album First Trip was released in North America earlier in the year to generally strong reviews and now makes its way to Europe. If you like blues-based uptempo stoner rock bands like Red Fang, Kyuss and Motörhead, you’ll like this album a lot. It has loads of fuzz, big meaty riffs a hard-hitting rhythm section and excellent vocals. The combination of two guitars, a keyboard and bass all hitting big notes together is monstrous. This is stoner rock as Satan designed it. This is the stoner rock your droids are looking for.

The songs are generally short, 3-5 minutes, and loosely follow traditional structures, but also do a great job of taking the listener on small journeys, especially during outros and bridges where the band generates some of their best moments. The album experience is fast paced and full of energy. There is no overstaying welcome or over indulgence on any one riff or theme, which speaks to the quality of songcraft here and concise editing.

But while there is a lot in common here with some of the better-known bands in the genre, WhiteNails has its own take on things. There are constant forays in space rock and sludge. These moments don’t tend to linger very long, but they happen consistently throughout the album, which gives the band an otherworldly quality unique in the planet of fuzz. They even incorporate a guest singer, to great effect.

The band started life in 2015, put together by guitarist Taylor Johnson (ex-Atomis) and guitarist Danahe Cote, initially as a side project for the pair. It quickly bloomed into something much more than that, eventually becoming the full focus of both men, with an active touring and recording schedule that includes shows with Elder and King Buffalo.