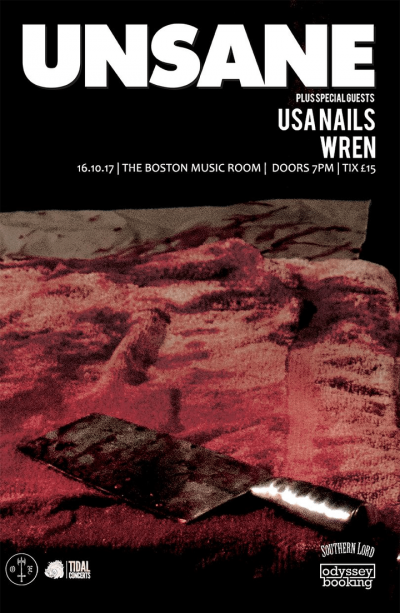 A red sky at night, so the saying goes, means pleasant, temperate weather the following day. So, what happens when the day is red, the sun transformed into a blood orange in the sky? London feels different today. As sand from the Sahara has been blown inextricably high in the atmosphere, it has come to colour this day in the UK capital. It seems oddly apt that this day precedes Unsane’s return to London. The new album, Sterilize – their eighth, and first in five years – is adorned with their signature stark imagery: an ill-defined claw slash with blood splattered around. With the day subdued by the odd phantom light, and a star beating down that bares the same hue as that which keeps us all alive and conscious, it feels the evening is indeed here to sterilize the hours before and to double down on the disquiet felt by all.

Boston Music Rooms continue to host quality nights of heavy music and it (and sister venue The Dome) really are coming into their own in terms of attracting bigger acts away from the crowded and increasingly neutral streets of Camden. A final push, a final – no, not revolution – but, transition is close at hand. The venue can at times feel a little too “straight-forward” in terms of shape, and lacks the intimacy of some of the capital’s other destinations. It makes up for this with exactly the attribute previously criticised – there are no odd quirks that stop anyone from finding a space to enjoy the gig, and it lends itself to a surprising easy knack for finding space to view the stage quite unencumbered.

The venue has a fair amount of people in when Wren take to the stage, but I’m quite surprised that there isn’t a larger crowd already. This is my first time seeing the band, but I’ve heard a large amount of buzz around them, having been picked up by Holy Roar and managed to be on tour with and seemingly friends with a large amount of the “big hitting” underground UK acts around today, certainly when it comes to London. They are a band, from what I’ve been told, that I should easily like. It is with some trepidation therefore, that I have to admit to not particularly understanding quite what the fuss has been about. From the very first bars the band seem disjointed. There’s something interesting going on here, but until they figure it out, it’s not much of an interest to me, and seemingly to the other audience members standing close by. An established band by this point, it’s somewhat of a disappointment to find the end product so muted.

I feel I have to note that the bands aren’t sharing all their gear, as the drum set Unsane will eventually use sits in the “traditional” space, whereas both Wren and USA Nails share a kit that is placed in front. This immediately limited Wren’s scope in terms of commanding the stage. They don’t look convincingly comfortable. The sound throughout their set remains murky and it seems that this is predominantly coming from the band, rather than any fault to be levelled at the sound engineer. It begs the question – why?  Thick distortion, reverb and so on are all central tenants of this post-whatever fair, but instead of producing a sound that dominates the room, Wren’s set up washes out the angst and tension they attempt to create time and time again. The veil of noise and poor distinction lends their set a tiresome air, rather than hypnotic vibe. Instead of inspiring rapt attention and engendering that much sought after “closed eyes” moment, Wren simply make me frustrated. Moments that do build and capture creative minds are either over far too soon, or repeated ad nauseam, undercutting that initial rapture.

Rather than go on, I chalk the night simply not belonging to them; their riffs and entire set melting into the forgotten seas and cannon of post-metal something-or-others…  Wren’s inclusion also sparks the old debate of “respected bands doing well and being local” being put on the bills of too many gigs, especially those that don’t suit their style. Yes, Wren create loud, complex, heavy music, that – on a better night – may be noisy decisive and intimidating. But, even then, they don’t meld well with USA Nails and tonight’s headliners, and upon reflection they were increasingly an odd choice to my mind.

An attribute to Wren’s set that also seemed “off” was the lighting. About five minutes before USA Nails take to the stage, this lighting changes to a mellow, dappled, multicolour background. Whereas Wren was drenched in harsh, clear light, glaring into the audience as well, the remaining bands enjoy a more familiar set up. One wonders whether this was a mistake or a request from the opening act. Surely not?  Either way, the gig immediately becomes more intimate and it didn’t feel at all disconnected that the majority of the audience took at least two steps forward when the second band takes to the stage to do some last-minute tuning. Despite still using the drum kit that is centre stage, the three other members of USA Nails seem to have less pedals and so on than the three non-drummers of Wren, which lets those members of the second act move around the stage far more freely.

The band looks and sounds like they are more at home on the Boston Music Room’s stage, and employ that room far more effectively, thus engaging with the audience far better. There’s no mistake that the venue has filled up, the audience number bloomed, and that USA Nails are a big attraction for many tonight, lending them an upper-hand I had imagined Wren would also have. The rhythm section and lead guitarist are endlessly inventive throughout their set, and are mesmerising to watch and listen to. The vocalist and other guitarist seems to be the “ring leader” of the band so-to-speak, but never seems to be as in tune with and cohesive as the other members are with one another. His vocals are either swallowed by their frantic sound, or float on top, slightly gratingly. The subject matter of their lyrics – from what can be discerned – is a little by the numbers when it comes to “grown-up”, adult angst. I don’t mind telling you, dear reader, that I bit my lip once or twice.

However, the band play a memorable set, and many scuttle off to their merch stall – some clearly newly initiated into the USA Nails sound, and big fans hunting down the band’s last copies of a recent new split 7”. Their set is a mixed bag: some songs fly by and sound fairly unremarkable to my ear, yet others fizzed with creativity and a remarkable energy, and with a knack for numerous heavy, atypical earworm riffs. A band to revisit both live and on record very soon.

Unsane saunter out on stage to rapturous applause; the noise-rock pioneers revelling in the appreciation of a hungry London crowd. The venue by this point is fit to bursting and this sudden increase towards capacity suddenly imbues the evening with a heat and urgency it has so far lacked, despite two weighty support acts. Despite having one less member than the aforementioned bands, Unsane manage to usher a density of sound out of their equipment and the back line that is surprising to all at the venue. Their opening salvo of tracks feels like a powerful wave cresting and breaking on an unsuspecting shore.

Those familiar with the band’s sound but having not experienced them live before will find it hard to picture, but there is a breath-taking effortlessness to the trio of Chris, Dave and Vincent’s musicianship. They stare at each other intensely during classic cuts, but often look like their goofing about – trying to make the others laugh and mess up – or, at other times, look almost completely uninterested, typically at the most technical parts of a song. Seeing a band live that are due to celebrate their thirtieth anniversary next year (2018) is a very different prospect to seeing a band in their first few. There’s an implicit respect, understanding and intuition between the members that only comes with time. There’s also a special type of reaction from a crowd when there’s such a rich catalogue to play from that again, can only come from time, ceaseless touring and an artist’s touch to each recorded output. The band deliver stomping tracks and irresistible shout/scream-alongs from their history.

Sterilize was, of course, well represented, as was Visqueen, and it is to their credit that the audience knew these tracks as well as any other. So often in a long career, the response to newer material becomes oddly muted, and the crowd only comes alive again when a riff from some raging snippet of a career-defining album ushers out of the amps’ speakers. Of course, these ruthless anthems are plastered throughout the nearly twenty song set, with a quarter of the tracks being cut from the bludgeoning 1995 album Scattered, Smothered & Covered. Unsane, like truly seasoned performers, artists and “entertainers”, put together an evening to please all – and cover the entirety of their fan base, old and new. This is an art unto itself, and Unsane, like everything else this night, do it with ease and aplomb.