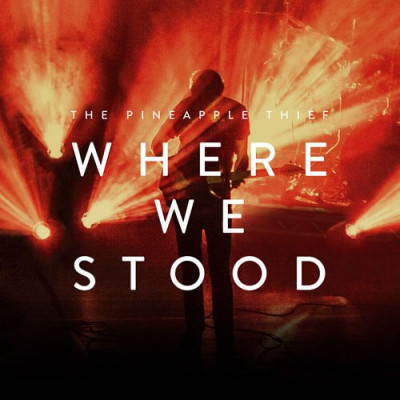 Where We Stood by The Pineapple Thief

It’s perhaps slightly astonishing that despite a career that spans nearly two full decades, Where We Stood is The Pineapple Thief‘s first generally released DVD/blu-ray release. Fans of long standing may remember the low-key, direct-from-the-band DVD-R release that constituted the band’s sole previous venture into live video: entitled simply Live 2003, and limited to a mere 400 signed copies, it may have placated the band’s diehard followers at the time, but there has long been an appetite for something slicker, something that more effectively showcases the band’s ability as a live act.

Even that claim might have been hollow once upon a time. As founder and chief songwriter Bruce Soord freely admits in candid interview footage included on Where We Stood, The Pineapple Thief were not initially particularly gifted when it came to live performance. That first live DVD caught the band in their embryonic live form – The Pineapple Thief was initially Soord’s solo studio project, and it was only after the surprising success of the first three albums that Soord elected to bring the material to the stage. Recruiting friends to make up a live unit, Soord did his level best to reproduce his ambitious music to the stage, with decidedly mixed results at first. After a nerve-wracking gig supporting Marillion at one of their convention weekends in front of a much bigger crowd than the band were usually able to gather, and a “disastrous” festival appearance in the USA, Soord decided to get serious about live performances. It wasn’t long before the efforts of the band bore fruit, and they have now been a reliably powerful live act for some time now. Recent line-up issues led to the recruitment of Godsticks frontman Darran Charles on lead guitar and legendary sticksman Gavin Harrison (Porcupine Tree, King Crimson) to bolster them on stage, and if anything these recent additions make Where We Stood the perfect showcase for The Pineapple Thief live experience.

Let’s start with the most obvious thing: Where We Stood is beautifully shot. Filmed at the Islington Assembly on the last night of the band’s tour in support of their album Your Wilderness, the live footage is a joy to watch. The oft-criticized hyperactive camera work that plagues so many live DVDs is almost entirely absent here, the lingering close-up shots of the musicians at work and swooping wide shots of the stage and the audience help to generate an immersive atmosphere that really is the next best thing to being at the gig. The band’s music, a pleasing mix of the stately elemental atmospheres of Pink Floyd and the wiry energy of alt-rockers such as Biffy Clyro, shot through with Radiohead-style electronica, benefits hugely from the sympathetic editing. The band don’t employ a bells-and-whistles lightshow, opting instead for simple lighting that the filming makes use of in superbly moody style. The sound, too, is pin-sharp and beautifully mixed. Not even the most subtle of Harrison’s nimble cymbal hits is missed, every slowly bent note and keyboard flourish is captured with finesse.

Soord addresses the audience rarely, but in his usual disarming way, beaming as if he can’t quite believe his luck. Perhaps he can’t, at that, but his modesty is endearing. The set, unsurprisingly, is weighted heavily towards selections from Your Wilderness, and the band’s more recent albums, with only the evergreen Part Zero and a gorgeously intense Snowdrops representing the band’s pre-2010 catalogue. Whilst the relative paucity of older favourites might disappoint some of their long-term fans, the band are to be applauded for having the courage of their convictions and showcasing their more recent work in this way. Certainly on this kind of vibrant live form it’s hard to fault them for it. The set is thronged with highlights, from the delicate ‘That Shore’ – during which you can almost hear the audience hold its breath – to an apocalyptic closing reading of ‘Nothing At Best’ that positively pulses with energy. When the band allow themselves space to stretch out a little, as on the thrilling eight minute ‘Reaching Out’, or the slowburning ‘The Final Thing On My Mind’, their confidence as a live act is palpable.

The live footage might be the main attraction, but there’s much more to enjoy. Interspersed through the live footage are brief interview vignettes, primarily with Soord, although the other band members with the sole exception of Harrison also feature. These are used as a means of telling the band’s story and describing their evolution. If you’ve ever been curious about where the band’s name came from, how close Soord came to calling an end to the band during the aforementioned line-up issues, or how Harrison and Charles came to be involved, your curiosity will be satisfied. Whilst these interview sections are entertaining and informative, purists will be happy to hear that there is an option to omit them from the playback of the live show. There are also a couple of nicely put-together mini documentaries, one about the making of the promotional video for ‘In Exile’, and one concerning the recording of Where We Stood itself. There are also promotional videos for several songs, and – if you spring for the blu-ray option, or the deluxe box set – Your Wilderness in full (complete with the limited edition bonus release 8 Years Later), in hi-def stereo and in a gloriously immersive 5.1 mix produced by Soord himself, as well as intimate acoustic performances of some of the tracks from Your Wilderness. The deluxe box set also comes in a large-format hardback LP-sized book with a 48-page photo booklet with stills from the live footage.

It’s hard to imagine how The Pineapple Thief could have made this set any more comprehensive. For now, at least, it is the last word as a record of the band’s impressive live performances, and marks the closing of another chapter in The Pineapple Thief’s biography. A great summing up of everything that is so enjoyable and cathartic about their back catalogue, Where We Stood is a live document that serves newcomers to the band as well as it does established fans. If you’ve not already discovered the joys of The Pineapple Thief’s back catalogue, this is a superb introduction. If you have, then this is the perfect way to remind yourself of just what a great band they are whilst you wait for Soord and his band to record their next record.