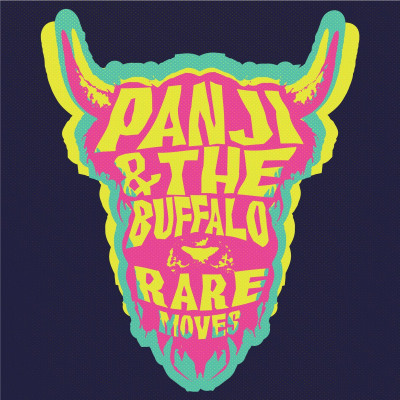 Rare Moves EP by Panji and The Buffalo

I’m not going to give you a blow by blow chronological account of Rare Moves by Panji and the Buffalo. Instead, I’m going to start this review slap-bang in the middle.

‘Polygon Switchblade’ is track number four of the first solo outing of ex YouSlut! drummer, Daz Cook. It marks a sea change in this artist’s MO; a declaration of intent. It confirms our suspicions that, whilst Cook was clearly the driving creative force behind much of YouSlut!’s unique calibre of quirky, schizophrenic math rock, (the spectre of which still lurks amidst Panji and the Buffalo’s multiple personalities) things are different now and this unbridled talent is responsible to no one but itself.

A far cry from the frantic, spasmodic mind-lunch that makes up much of Youslut!’s back catalog, ‘Polygon Switchblade’ is a luscious rolling acoustic passage, glistening at the edges and emanating a kind of radiance that points the way to something new. Two other equally short acoustic lead songs punctuate the more developed, frenetic compositions on this frustratingly brief foray into the musical mind of Daz Cook, namely ‘Parasol Starz’ and ‘Them Hired Guns’. These tracks are consolidated by the more substantial closing track ‘SWIV Dreams’ with its crispy 808 beat and almost sitar-like melody. This record is abrasive and delicate in equal measure; paying homage to the genre of math rock by throwing energetic shapes into the air one minute, then defying expectations by settling into moments of calmer reflection the next.

If the fact that this vibrant, multi-genre masterpiece was conceived and executed by just one man from Derby doesn’t cook your brain, then the breakneck speed at which these songs unfold, with their unruly time signatures and cerebral intricacies will. Songs such as ‘The Ballad of Dan Pidgeon’, ‘Bubblun’ and ‘What Happens on Chromos, Stays on Chromos’ gyrate with familiar twists and turns; planting this record firmly alongside contemporaries such as Alpha Male Tea Party, Tubelord and Lite for instance but it’s the chaotic amalgamation of ‘Taneo’ that really emphasises Cook’s ability to math rock-out.

Rare Moves is, in some respects, exactly what you’d expect from the drummer of one of the most formidable acts in this genre. In other respects, it is surprisingly refreshing and sprinkled with moments of clarity amongst the madness.