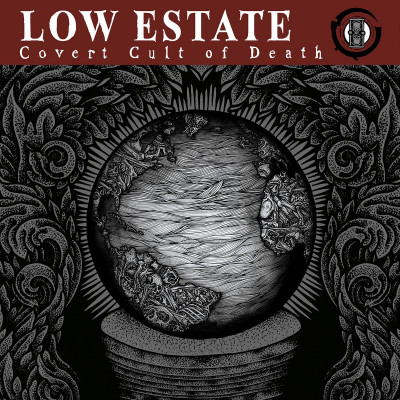 One of the more challenging aspects of living in New York is the inevitable subway ride with an irate homeless person. Daily commuters can expect such encounters at least once per month. The homeless are more dangerous than the other subway scourge, preachers, but also a lot more sympathetic even at their most bile filled. Today it is a woman storming up and down the aisle vacillating between some seemingly poignant observations about god and furious racist tirades. I feel bad. I kind of want to give her a hug. But that’s not an option here (white males like me just shut the fuck up or shit gets worse). So, I detach mentally. But that’s not easy to do. I need music that is all consuming, that won’t be ignored, that is even more violent, unpredictable and ultimately more demanding of my attention than anything else around me. Fortunately, I have Low Estate’s Covert Cult of Death to review.

This album is a grower. A first listen, it’s a very good blend of power metal, some of the more violent aspects of Chicago punk (think Jesus Lizard or Shellac) and technical death metal. But listen a few times and the genius of what’s created here really emerges. This is music stripped into its most raw and basic elements. There is no flash, pretention, or indulgence here. The songs are short, to the point and there are no wasted notes or noodling. The band has one job to do: to crush. Sure, there are one or two moments of melody on the album, but they only exist to lull the listener into a feeling of security so to be crushed again. Crushed and smashed.

It’s also a grower in that the songs get better as the album progresses. The listener hears more chances taken in songwriting and more divergences from any kind of traditional metal, more musical twists and turns. There are moments of pure metal rage followed by…well…more metal rage, but with very different layers and bass/drum/guitar/vox interplay. It is actually a hugely imaginative record.

Riffs are the core here; big, aggressive, riffs made to saw your head off. They are natural, and understandable, though (doesn’t everyone want to saw people’s heads off?), which is probably a function of the fact that the band has a guitar player playing bass and a bass player playing guitar. There is some use of effects, but they are not your usual fuzz and flangers. Instead they tend to be rather haunting spacious reverbs that turn even the softer more melodic moments into something haunting and uncomfortable. Again, for a record that claims to be rooted in punk, there is a lot of experimentation here.

And this is because Low Estate is a bit of a metal supergroup made up of members of Red Sparowes and Made Out of Babies (Brendan Tobin), This is Year One (Jimmy Hubbard, Geoff Garlock) and Sannhet (Chris Todd). Moreover, there are numerous guest appearances, so the final product was a collaborative effort on the part of many. It’s also a band that is split between Brooklyn and Austin Texas, which may explain why the album feels so focused and well edited. The band had limited time together and so had to always make the most of scarce resources.

My favorite song on the record is ‘R-Complex’, which is also the strangest, and is probably the most influenced by Chicago punk and thrash, something that is especially evident in the bass/guitar interplay and caustic metallic sound of the instruments.

Unfortunately, the band won’t be able to tour much, so we can only listen to the album and imagine what a blistering experience the live show would be.

This album rocks. Buy it.