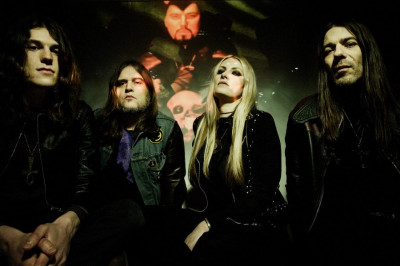 As a musician I suppose I am challenged all of the time. Always learning new things, trying to become better at what I do.

After three years Electric Wizard is ready to release their newest full length creation, Wizard Bloody Wizard. After several line up changes and many major releases, this England based 4 piece is continuing to push the boundaries in the stoner-doom genre. The heavy sound of Electric Wizard will continue to live on with their latest release, and adding a touch of classic heavy rock to manifest themselves into a new realm. With this updated, more rock and roll sound, Kara Chavez was able to catch up with Liz Buckingham to discuss their latest album, the writing process, some influences, and horror movies. Everyone is excited to hear this new album and we all hope to see them live in the upcoming years.

E&D: Three years ago Time to Die was released. Since then you have been writing and preparing for the new album, Wizard Bloody Wizard. Can you tell me a bit about your writing process as a band? How is this different than your other releases?

Liz: The writing process varies slightly from album to album. This time the music was written and recorded without the vocals, which caused a few difficulties later on. It’s also the first album we recorded in our own studio, so we had a lot more freedom in some ways.

E&D: What is the theme of Wizard Bloody Wizard you would say? What is your favorite song off the album and why?

Liz: I really like ‘Hear The Sirens Scream’ because it reminds me of a 70’s British horror film like Scream and Scream Again or something ….with the guitars at the end sounding like the old British police car sirens that are always in those movies.

The whole point to the album was to capture all these different influences. All the classics and things that make up Electric Wizard.

E&D: You have been playing in bands for some time now. Who are some of your biggest influences?

E&D: What is your favorite part of writing and performing music? What are some of the challenges you face as a musician?

Liz: I am a creative person, so I really enjoy the creation end of it. I like making the music, the art etc….I am not that into performing, but I do love playing a gig when everyone is letting go and getting completely immersed in the music and the whole vibe becomes one big bacchanal.

As a musician I suppose I am challenged all of the time. Always learning new things, trying to become better at what I do … the biggest challenge lately is probably trying to find new ways to interpret what I like so it’s interesting and new, which is hard in today’s world of over saturation.

E&D: Where do you see Electric Wizard in 5 years? What is the sound going to be like?

Liz: There is no way of telling that, it’s not like we plan on sounding one way or another. We play what we’re into hearing at the time. We react to our environment and what’s going on at the time. It always seems to sound like Electric Wizard though. No matter how much we think we’re changing. If we did anything radically different it would probably be under another name.

E&D: Outside of music, what are some of your hobbies and interests? Jus is known for being into movies of the horror genre, are you also into them?

Liz: Yes I am also into them….and let me specify that it’s not just horror that we are into. We like all exploitation, underground, arthouse, giallo..whatever…as long as it’s from the 1960s-1970s with a little bit of early 80s when we’re desperate. When Jus and I first met we bonded on our mutual love of these films. We didn’t talk about music, we talked about movies.  It’s what we are really into on a total geeky level. So yeah…it’s a hobby of mine and I collect a lot of movie related stuff too, posters, press books… I am a collector…I collect a lot of stuff. I like to travel to different places and hunt for old books, skulls, morbid antiques, erotica, knives. I like anything weird and subversive. I am also into photography and old cars.

E&D: Any plans on touring with the upcoming album release?

Liz: Yes, we are planning a few things for next year. We’re gonna try and get to America again…maybe Japan…a bunch of different places. Nothing definite yet.

E&D: What has been your favorite place to play so far in your Electric Wizard career? Any shows that stand out in memory?

Liz: It’s hard to narrow it down to just one, because we have played so many over the years and there have been quite a few memorable gigs for one reason or another. I suppose Maryland Deathfest was pretty amazing, just because the audience was so out of control. Just the sheer volume of people going nuts, was awesome. Our London Roundhouse show…such a historic venue, where so many of our favourite bands of the past had played before. Webster Hall in New York, because I had seen so many bands when I was a teenager there, it felt a little surreal. Generally the best shows are just the shows where the audience is getting totally immersed in the whole thing and letting go…and luckily, we have a lot of really cool fans who get it, and go for it. So there have been quite a few gigs that stand out in my memory, from different places around the world.

E&D: If you could share the stage with anyone or any band, who would it be and why?

E&D: Any advice for other female musicians who are also in metal bands?

Liz: The same advice I would give a male or female. Do it cause you love it and don’t let anyone tell you, you can’t.

Wizard Bloody Wizard will be released in November 10, 2017 on Spinefarm Records.