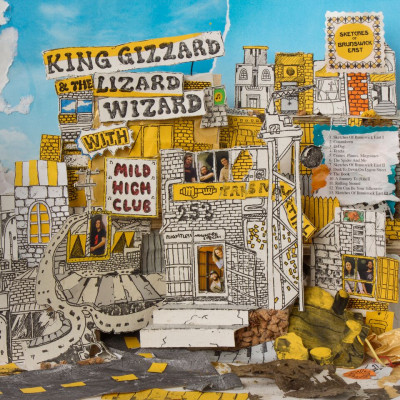 Sketches of Brunswick East by King Gizzard and The Lizard Wizard

After following Australian psych pioneers King Gizzard and the Lizard Wizard the past few years and into their attempt to release five studio albums in 2017 I was excited for the newest release, Sketches of Brunswick East, which takes the form of a venture into jazz. Sketches is a collaboration with Mild High Club’s Alexander Brettin, an American psych pop prodigy who shares their love for multi-instrumentals and experimentation, so when they met while touring a friendship and collaboration was definitely on the table. The album’s title is inspired by Miles Davis’ Sketches of Spain with a nod to King Gizzard’s hometown suburb in Melbourne. The record was recorded at the band’s own Flightless HQ in East Brunswick earlier this year.

The album is built around sampling and reshaping old jam infused sounds into new warm and loose jazz forms. This is very apparent early on in the record with experimental microtones from Asian and African strings and flutes floating in on songs such as ‘D-Day’ and ‘Tezeta’ which are pretty reminiscent of their first record of this year, Flying Microtonal Banana. ‘Tezeta’ also sees Joey Walker trying his hand at writing and singing, which casts interesting contrasts over the song mimicking a incantation being monotonously chanted followed by a spell setting in. Apart from the sampling the record is far detached from the apocalyptic themes explored on the previous 2017 albums. ‘The Spider and Me’ bleeds folk influences as well as taking many a soulful tumble tripping you over and throwing you out somewhere between an English field and a tropical paradise. ‘The Book’ being penned by lead Stu Mackenzie takes a much more familiar step into their sound, showing off their mastered layering of instrumentation which jumps in and out while being interrupted by buzzes and distorted vocals.

I think Sketches is an interesting insight into King Gizzard’s jamming through saturation of sounds and people. The collaboration definitely finds a middle ground between the relentlessness of King Gizzard and the subtleness of Mild High Club. Despite finding this record enjoyable on a base level I do think that the five album release is understandably taking its toll on the self-editing of what warrants making a record and which sounds could be developed more given their highly skilled musical capabilities. I do understand that as a placement within King Gizzard’s musical timeline it does make sense to make a looser non-conceptual relaxed musical venture but I’m just not sure if it does much more than exist as that.

Despite this, record sales are looking ridiculously good for the band due to the loyalty of their fast expanding cult following. I recently caught The Murlocs a side project involving Ambrose and Cook from the band at The Moth Club in London, they played a killer show before flying back out to Australia and America where King Gizzard and The Lizard Wizard are embarking on yet another tour. There is no doubt a huge amount of writing and jamming will also be going on to get the last two albums of this year released and I can’t help but find their pro-activity and creativeness inspiring. Overall I think Sketches is an enjoyable listen but in my opinion like a sketch serves as a brief view into a time and place that is not finished, I look forward to seeing them work with these sounds more in the future.