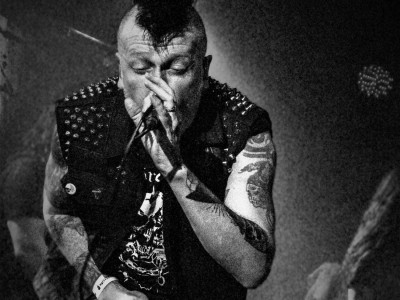 We have had a few teething problems on stage but that’s to be expected, especially as we don’t rehearse, just turn up and do it you know...

As the band pulled into Manchester for the second date of their tour in support of recently released third album Fear Those Who Fear Him, I managed to grab a few words with Vallenfyre frontman Gregor Mackintosh about the band’s influences, touring and future.

E&D: Thanks for your time. You are quite early in your tour, how have the shows gone so far?

Gregor: It was good. A decent turn out, and the crowd seemed to like it. We have had a few teething problems on stage but that’s to be expected, especially as we don’t rehearse, just turn up and do it, you know. A few little niggles but most of them were to do with the sound in the room. We couldn’t hear ourselves properly and had to restart a couple of songs.

E&D: Its quite rare to see you play some UK shows. Mainly the odd festival or one off shows. It means that whenever we do get the chance to see you, its always a bit special.

Gregor: Yeah, its about three years since we did something last time, so its never been a regular thing.

E&D: Is that down to the difficulties of getting everyone together?

Gregor: Kind of, yeah. To do a run of shows it is quite difficult to get everyone together for any length of time. Me and Waltteri [Väyrynen, drums] have been non-stop with Paradise Lost for the whole year so far. I mean, I was in Dubai two days ago, London yesterday and Manchester today.

E&D: You mentioned Paradise Lost there. How easy is it to switch between the two very different bands?

Gregor: It feels very different to be honest, because I’m only the guitarist in Paradise Lost, and vocalist in Vallenfyre. It doesn’t feel the same on any level, they are both really, really different jobs so it’s easy to switch between them. I’d say this is harder than Paradise Lost, because with a guitar, you have some degree of control with what happens. With vocals, you have very little control whether you are going to blow your voice on any given night. If I get a cold I’d be fucked, but I remember being told that years ago by Carl from Bolt Thrower, just ride it out.

E&D: Your new album has had great reviews again. Now you are further down the line and that material is quite old to you…

Gregor: Not really. We haven’t had time to touch down yet since releasing it, because it came out and then we went out with Paradise Lost, so I’m only just coming back to it and its still quite fresh. It’s a great snapshot of who we are right now, and that’s what we sound like live. The latest record is about as close as you are going to get to capturing how we sound live, because that was the brief we gave Kurt [Ballou]. We said Splinters [the previous record] sounds great, but live we are a little bit more chaotic and noisy and a bit more unhinged, and we really wanted to capture that sound.

E&D: Vallenfyre sound very different to the other bands you are all part of. How has the band evolved to this point?

Gregor: There were elements of all out other bands come creeping in here and there, but I think the last record delves more into my musical past, which is very early proto–death metal and the end of early 80’s hardcore punk. That then became crust punk and more metallic and eventually grindcore and death metal were born from that.

E&D: Do you find yourself having to be a in a different frame of mind when writing for the different bands?

Gregor: This is a lot more… obnoxious… I think that’s the word I’d use for Vallenfyre! I kind of think in a more refined way when I write with Paradise Lost. It’s the two different side of me I think: the kid in me is Vallenfyre, while Paradise Lost is the more grown up version of me. Its honed skills and practice for Paradise Lost, and then forget everything for Vallenfyre and just be as obnoxious and messy and angry, I guess.

E&D: You mentioned your love of hardcore and death metal. Who were your biggest influences when starting out as a musician?

Gregor: First of it it was my older brother. He was three years older than me and part of the hardcore and skinhead scenes in 1980–82, and I just used to nick his records. It was more English hardcore bands at first, and local stuff too. There was a band called Ultraviolent, and the singer went on to be in English Dogs. Also, bands like Discharge, Conflict, things like that. I was into the anarcho–punk scene and it all got a bit more metallic, until it became this kind of crust punk crossover thing. I just went with it, I mean I’d never heard Black Sabbath, or any metal apart from Motörhead until I was maybe 15.

E&D: The first Vallenfyre abum was very personal to you. How have you managed to match that intensity on the other records?

Gregor: The first harked back to the early days of Paradise Lost when we first started that, so it was all reminiscing, and then it moved on and became something that was fun to do. The first album is very separate to the other two. I think, in a way, because it was a one off that just spiralled into something else.

E&D: Was it only meant to be a one off then?

Gregor: Yeah, just one album; and we enjoyed doing it, so we thought, “why not give it another go?”

E&D: Do you think with the subject matter of that record being so close to your heart that the reaction it got was pretty special?

Gregor: I don’t know. I was a bit weird about releasing it at first because it was like wearing your heart on your sleeve, and I’d never really don’t that before. I think it was after talking it over with a few people, like when we did Boltfest, the singer from Benediction came over to me, and so did Joe from Bolt Thrower and both said they had been through similar things; so it was nice to hear someone else knew what I was going through. I’m not really a talker, so it was nice to offload a little bit, something I didn’t expect to get from it at all.

E&D: I was at Boltfest and there was a definite excitement around the band’s set and a lot of people really enjoyed it.

Gregor: Really? It was one of our first things, that show. Maybe our second ever show. I didn’t know how to approach it really. We hadn’t put much thought into it at all. It was cool being part of that though. Bolt Thrower pretty much hand-picked the bands they grew up with and toured with in the early days. I was luck enough to be one of those people. We toured with them and Autopsy around Europe.

E&D: As well as Boltfest, you played some pretty special shows in your career, including sets at Donington and Knebworth. Do you have a particular show that stands out for you?

Gregor: Probably Dynamo 1995 for Paradise Lost. It was just the whole culmination of the whole scene. Anyone who was anyone was there. Type O Negative, Anathema, My Dying Bride, Paradise Lost, all on the same bill. There were over 100,000 people there too, and I don’t think the festival was ever that big again. For Vallenfyre, it would probably be Boltfest. It was for Teenage Cancer Trust – I lost my dad to cancer. I was really surprised that they managed to get that line-up together. They had to call in a few favours to get the venue and everything for that.

E&D: So finally, what is next for Vallenfyre?

Gregor: Gigging mainly. For maybe another year or so. I don’t think we will be recording again. It would be nice to leave it as a trilogy, because it’s done what we wanted it to do with it. We just want to to tour now. It would be nice to go back to America, as we did the Decibel tour a couple of years ago. We’ve never been to South America, but we’ve got contacts there from our other bands. Spain, Portugal etc. Other than that we will just see what we get offered. Its just nice to get out there and play. After this tour finishes, me and Waltteri have maybe a couple of days off, then its out for seven weeks with Paradise Lost. That’s really taken off again, and I don’t really know how or why. Sometimes it’s the band, sometimes it’s the scene, and it could be a mixture of them both. It could just have been right place, right time. But like with Vallenfyre, we are happy to sit back and see what happens… go with the flow.