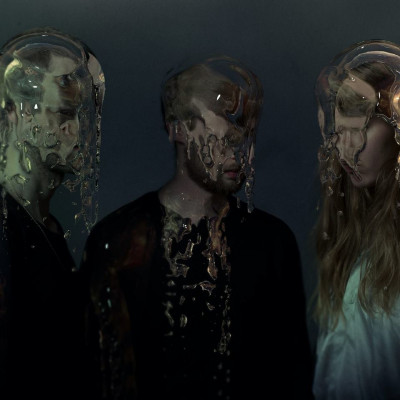 Gangly definition – “Loose and awkwardly built”. That is the furthest from the truth concerning the group Gangly. Their music is precise and taut in production with a clear direction for inhabiting an auditory headspace and feel. At least for me, that would be dreamlike slow jams. Gangly is comprised of three from some of Iceland’s most notable bands: Sindri Már Sigfússon of Sin Fang, Jófríður Ákadóttir of Samaris and Pascal Pinon, and Úlfur Alexander Einarsson of Oyama. I invite you explore their Self-Titled debut which was released on August 31st through AMF Records.

Slow jams? That term here in America is so diluted its ridiculous. With radio tracks being typically occupied by overproduced vocal drones relying solely on autotune, and tracks that utilize whatever the “next” cool effect is. Uninspired fluff if you ask me.

This is the exact opposite of Gangly. Overall the tempo operates under the shroud of a lower BPM and a sound cloaked by a somewhat gloomy tone. But beneath that veneer is an EP which is exceedingly dynamic, emotionally engaging, and dense with lyrical themes that hold real substance. A fusion of subtle synths and initially unassuming industrial effects thematically embed themselves into each beat and with a singular purpose of floating to the surface of a collective qualia.

Slowly, softly, and naturally slinking up like a tendril bound for a crest seeking the sunlight. Which can also be a fitting description of each track respectively. Seemingly forlorn on the outset, every chorus exposes itself like the bud of a morning glory opening or a cocoon’s first breach revealing life.

Half dark and half light. Gangly’s entrance into our consciousness breeds a hope that non-analog music can still proliferate the bandwidth of listeners seeking something different and inherently still honour our much beloved universal language.

Only in this modern era has music so good been able to reach my shores and ears. For that I am gracious, and aching to hear more. Unfortunately, this Ep only features four tracks. But hopefully this is only the beginning of a long relationship between Gangly’s stimuli and our ears.