(((O))) Feature: Echoes of the Past: GNOD – Ingnodwetrust 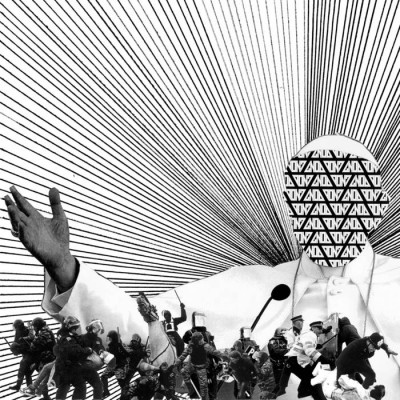 Somebody does something unspeakable to the insides of a piano. This sound fades, leaving us unsure what happened, but feeling sorry for the person who’s got to tune that later. A bass starts pulsing. Maybe we’re headed into the steady, hypnotic soundworld of Can or Neu, and as lockstep drums pick up the pace we can be forgiven for continuing to make that mistake. Even if there is something a good deal more menacing about that rhythm. But then some bubbling, hissing, terrifying sounds push forward into the mix and we realise those are the vocals, for heaven’s sake. The rhythm drops out and leaves us alone with them. Please don’t leave us alone with them. We are grateful for the return of the drums, even though we can’t help feeling they might mean us harm, too.

Such was my introduction to Gnod, the Salfod collective who have been gaining increasing prominence by rewiring British psychedelia into angry new shapes. Recent releases have brought their anarchist agit-protest leanings to the fore. Where they go next is anybody’s guess, and might involve calm synth ambience as much as controlled rage. Some of their material is like a harder, (even) punker Hawkwind. But on Ingnodwetrust they were determined to dissolve our egos properly, before they could start the work of building us back up into angry new forms.

Just two pieces here. There are vocals, but calling these ‘songs’ is doing them an injustice. The pounding monster I’ve described above is called ‘Tony’s First Communion’. If real communions are anything like this, then the hold of the Catholic Church over so many psyches is less hard to understand. The pounding goes on, and we’re ten minutes in before we know it. Vocals whirl, brass stabs through the morass and it’s building up, building us up to an epiphany…. And then it’s gone. Twenty minutes could have been two, or sixty. We’re definitely not quite the same as we were before that happened.

Side two brings us the ‘Vatican’. And now things get serious. The Vatican isn’t just coming for your head; they’re after your groin, too. A drum threat, and then some organ sounds and Latin… blessings? Threats? Either or probably both. And then a monster, throbbing groove that blows the roof off. You can dance to this. Probably wearing leather in an unlit basement, but you can. Don’t get complacent, though, because the rug (threadbare and stained though it is) is coming out and we’re sucked down by a huge descending organ-enhanced doom riff , which will degenerate into electronic howls and shudders before leaving us exhausted on the floor. But renewed and energised, because this isn’t about punishment, it’s nourishment for the head and heart, and Gnod have had plenty to feed us since.