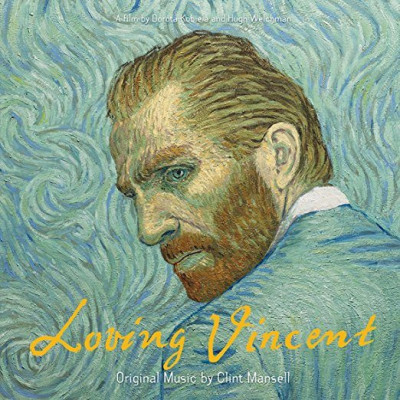 Loving Vincent doesn’t do things easily.  But then, it was never easy for the film’s subject.  65,000 frames of animation created with oil on canvas is a beautiful and incredible undertaking, matched only by the film’s quest of tracking down and understanding the circumstances around Vincent van Goch’s death.  In an age of technical wizardry and simplified exposition, this seems like a film wondrously out of step and out of time from anything else it will be sharing screenspace with.  And a singular film requires a singular composer, so to see Clint Mansell’s name attached to this project feels perfectly right, and thankfully sounds it too.

With the onus being placed firmly on the visual here, Mansell is ideally placed to bring an aural balance to the interpretation of van Gogh’s world brought to life by directors Dorota Kobiela and Hugh Welchman, bringing music that goes beyond the usual film regulation by matching the colours and images onscreen rather than simply adding depth.  There is little to nothing in the way of incidental snippet here; these are all full-blown pieces.

Married to very specific images thanks to titling each track after a particular painting, it has to be said that Loving Vincent is a synaesthete’s dream.  The obvious powerful use of colour is repeated in Mansell’s use of ebb and flow, giving the music a cardinal tone that hits hard with a vivid and patient explosion that affects every sense the listener allows these frequencies to permeate.  It is music that pushes gently but firmly from easily-remembered bases, layered carefully and elegantly with whatever is required to provide the necessary emotional punch that Mansell judges each piece should have.

Ebb and Flow are the watchwords here, as this is how these emotional punches are meted out.  The orchestrations gently bring together a conflicted mind and complex, fragmented soul by constantly marrying becalmed and stormy moods frequently.  This is done subtly as in ‘Portrait of Armand Roulin’ where a tranquil woodwind theme is overwritten with sharp, staccato strings while an almost imperceptible choir provides a third, heavenly counterpoint, as well as more obviously in ‘Still Life with Absinthe & a Carafe’ where a carefree accordion has its light firmly darkened by an orchestra driven from its lower end.

This frequent changing of moods is also done with a painfully romantic twist too; ‘Marguerite Gachet at the Piano’ begins with a sweet and dreamlike quality, before switching almost imperceptibly to a string-led affair that briefly contains a motif faintly echoes Clint’s iconic ‘Lux Aeterna’ before breathing out again and leaving the piece behind, giving an impression of a brief moment of obsession with the artist’s focus.  What is present throughout is a sense of wonder, as ‘The Sower with Setting Sun’, ahem, illustrates with its calm drama and almost everyday depiction of beauty and colour.

At this point I have to admit to an almost phobic aversion to Don McLean’s ‘Starry Starry Night’, and I can offer no reason why.  It’s just a song that has always rubbed me up the wrong way.  Age has probably mellowed me though, as the end-credit version here vocalised by Lianne La Havas follows on from the short and celestial punch of stunning score-closer ‘Starry Night Over the Rhone’ with a soulful prayer whose line “Now I understand what you tried to say to me…” sticks a knowing and loving two fingers up at my younger self, with a single bell chime at the end carrying the same tiny yet all-affirming sentiment of the entirety of It’s a Wonderful Life.

Given the weight behind each piece and the pain of its subject matter, the journey from one end to the other of this record can feel either joyous or difficult at different times depending on how you both arrive at, and set off from, the start.  The way that many tracks start gives the impression of an incredibly lonely collection of music (particularly during its second half where ‘Wheatfield with Crows’ can be especially frightening) but when the whole is put together with such thought and care it’s hard not to reach the end breathless and lightened from the experience.  It seems that every score that Clint Mansell puts his name on and heart into is labelled as a masterpiece.  He has set his own bar incredibly and beautifully high with Loving Vincent.