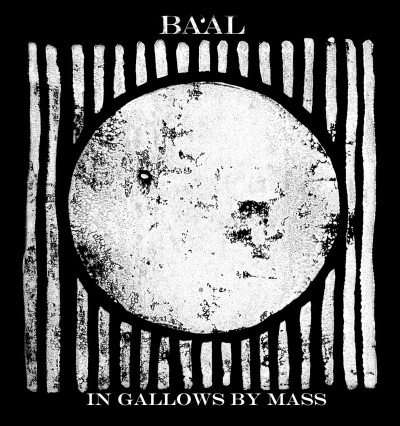 In Gallows By Mass by Ba'al

I am going to call it now: Ba’al are going to be huge. I’m putting that in writing so I can prove I was ahead of the curve during future late night arguments. This record absolutely floored me on first listen and my love for it has only grown since.

Sheffield based post-metallers Ba’al are releasing their debut EP, In Gallows By Mass, through APF records having formed in early 2016. Their modus-operandi is long and intricate compositions with slowly changing dynamics, tempos, and song structures. Contrast and texture within the music is constantly shifting and fading in and out, before some new aspect surfaces and becomes the focal point. The songs transition between intense heaviness and melodic calm, sometimes changing abruptly from one to the other.

The vocals include harsh screams and clean singing and at both ends of the spectrum lead singer Steffan nails it, managing to inject a powerful emotional significance into every word and phrase. The lyrics and vocals themselves are also part of the grand experiment in juxtaposition, with lyrics repeating as the vocals change from harsh to clean and back throughout the songs, again emphasising contrast.

This record could be interpreted as a conceptual soundscape, but it is also so much more. The whole thing is brimming with visceral emotion and meaning which extends way beyond it being just an exercise in composition. Also, did I mention that the EP only has 3 songs on it, 3! 3 songs and I’m ready to join the cult and drink the Kool Aid, it’s that good! You are definitely getting good mileage out of those 3 songs though, with the whole EP clocking in at just over 30 minutes there’s no lack of content here.

I should probably also admit that while I like to think that I discovered them, Ba’al have actually already been making considerable waves in the metal community. Winning Metal 2 the Masses in 2017 and so earning a slot at Bloodstock Open Air, they were then chosen as producer Russ Russel’s (Nepalm Death, Dimmu Borgir) new band of the weekend. Ba’al will therefore be recording with Russ in early 2018. With the release of In Gallows By Mass and the promise of new material on the way, I am left feeling almost sick with excitement to find out what they will do next. I cannot recommend this record enough and I will also definitely be trying to catch Ba’al live as soon as I possibly can.