(((O))) Review: The Doomed Bird of Providence – Burrowed Into The Soft Sky 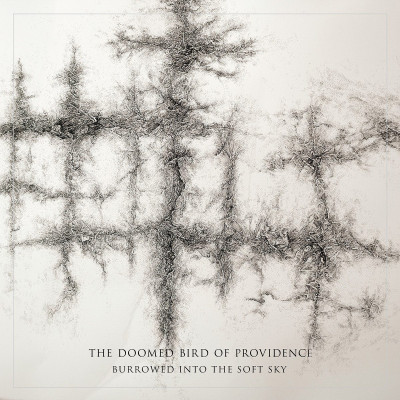 Burrowed into the Soft Sky by The Doomed Bird of Providence

Suggestion is a powerful tool in music.  Getting into someone’s head and then expanding with their own imagination is what makes for a good, powerful idea.  Doing this without words is even trickier, so a few choice pointers are sometimes all that’s needed to plant the seed which allows the listeners to imagine their own various beauties and horrors.

The Doomed Bird of Providence is a group of bards in the most traditional sense, bringing the news in a variety of entertainingly salacious ways.  I first heard them on the EP You Brought the Knife, a gloomy and sad courtroom recollection portrayed to the Empire’s scattered masses in a way that would have been easiest to absorb by their chosen audience: gatherings in backstreet drinking dens and bawdy theatres.  This is probably why Burrowed Into the Soft Sky is presented wordlessly, as the imagery that they put across of the colonial settling of Australia, had they put all of this into words in the time the music occupies, would have possibly seen them hanged for sedition for portraying a new life in the colonies in as bleak and visceral a light as possible.

Forgoing their usual vocal approach, Burrowed Into the Soft Sky prefers an instrumental approach, splitting their tale into two 20-minute tracks.  The first half, titled after the album, begins almost like Sergio Leone’s Once Upon a Time in the West – a stretched sense of anticipation before the locomotive percussion kicks in to send us on the way, taking (or bringing) unnamed characters away from relative comfort and safety.  Following that are calm periods of wonder and contemplation courtesy of some beautiful violin melodies that last for some time before we’re back on the train and the journey continues in stormy fashion.

Every time the percussion becomes involved, the mood darkens.  Even during the opening half’s relatively serene pastoral toil, there is a violent edge at its centre – reminding us perhaps that the means of transportation itself was built from invasion, suffering and death.  Ending on an almost hymnal sentiment there is a suggestion that this is an end-product, where new settlers are given a whole world of their own to exploit as they see fit, without mention of the displacement and murder that cleared the land for them.

We are left in no uncertain terms of this darker sentiment during the second act The Blood Dimmed Tide is Loosed, beginning with discordant stringed screams for three whole minutes before chaos is truly unleashed with a burst of percussive crashes that soon settles into the beat of a militia, growing louder and lustier with each step before another barbaric interlude gives way to a 4-note riff underpinning 5 minutes of horror.  By this pointing we’re left in no doubt as to what is going on here, and the level of discomfort created here is matched only by a compulsion that prevents us from turning away.  Even when this aural terror is over there’s still a long period of quiet desolation to take in, before the wholesome folk hymn that ends the first half is mirrored by a corrupted funeral pastiche to see us out before cutting out suddenly; as if the theatre lights were all at once extinguished.

It’s a hard thing to listen to.  It’s supposed to be.  And if it wasn’t for the musical talents and eye for drama on display here, it would be a discomfort too far at more than one point of its narrative.  It is however just as compelling (and, dare I say it, entertaining) as it is horrifying, just as our collective dominative history tends to be yet is rarely spoken of.