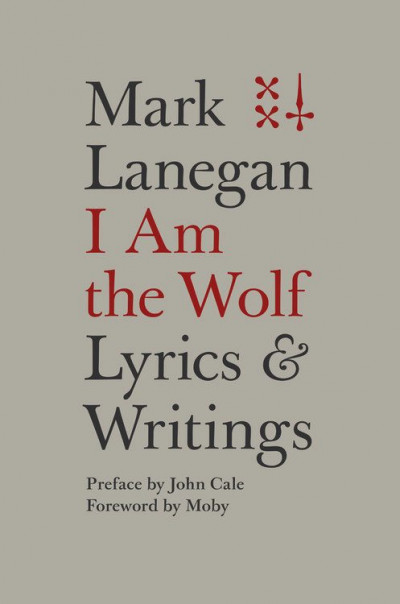 I Am the Wolf: Lyrics & Writings by Mark Lanegan

This is a book I approached with a little bit of trepidation, to be honest.  Mark Lanegan has collected and published the lyrics to his solo album works plus a hefty selection of his off-piste collaborations and b-sides, plus a selection of anecdotes regarding the timeframe and headspace of each milestone, under the title I Am the Wolf: Lyrics & Writings.  It’s this latter part which seems initially a bit weird, as the usually taciturn songwriter and vocalist well and truly keeps himself to himself and this is where the trepidation part comes in – a lot of what went on (especially during the earlier years) are either completely unspoken of or somewhat dark in nature, so would I view his words & music in the same way that I have done for however many years?

It comes across as almost something of a relief that the veil isn’t in any way lifted on most of the inner workings of Lanegan’s mind or past; each major chapter – representing each of his solo albums and his two exemplary Soulsavers contributions – prefaced with a page and a bit (or less – Gargoyle’s intro runs to a few sentences) with brief yet illuminating backgrounds with only a scattering of direct explanation for any particular songs.  This works well with the character of the lyrics and the author, although it does make it a bit of a sod to review without wanting to reveal any of what turn out to be genuine surprises and revelations contained within the economic prose.  So you’ll have to buy it yourself to find out just what the Bee Gees and Adam and the Ants have to do with any of this.

The wordier, non-lyrical segments come not from Mark but from a preface and foreword courtesy of two very different contemporaries.  John Cale’s introduction concentrates on Mark’s voice and words in a most characteristically beautiful way (“There is a darkness here for sure, but it is a mark of toleration” being a choice line), Moby’s foreword concentrates more on the person behind these “lyric poems” as he quite rightly puts them, and the effect he has on his audience: “The storms come in and the storms go out and sometimes they rage, but in the end we’re becalmed.  And there’s Mark, sitting in his formerly drunken boat, a wry smile on his face.”

“Formerly”.  When this book covers 28 years (so far) of writing and performing from someone whose work stretches back even further with the Screaming Trees, context is key throughout.  Those who have met him after shows or who have worked (or continue to work) with him all pain this picture of a gracious, charming, affable man.  Mark’s own (naturally brief) introduction reminds us that this wasn’t always the case, although it’s obvious that his jet-black and razor-sharp sense of humour remains throughout and is possibly why he’s still with us and making music. A short mention of waking from a near-death experience later in the book reminds us just how close to the bone he’s lived (sorry) as well as just how his worldview interprets such events, and a huge sentence listing both his occasional employments merged with various misdemeanours and pastimes serves as a short, sharp look at why he does what he does.  It’s also very occasionally just as sharp with its sadness, as when he mentions specific songs and meanings beside/behind them, it’s heartbreaking in both their tales and matter-of-fact narration.

The lyrical side that takes up the lion’s share of the book (covering everything from 1989’s The Winding Sheet to this year’s Gargoyle) is an enlightening read for even the most ardent of fans.  Having the words on the printed page is a different experience than having them bounce around inside your head from a record and it’s strange and refreshing to see that there’s no single process at work here, even within the confines of a single album.  Some songs look like songs (for want of a better term – x amount of verse lines, x amount of chorus lines, rinse and repeat), others cast structure out of the window in order to be bent around the music, and the most appealing ones just say whatever felt right to Lanegan at the time and which look crazy on paper but come across beautifully when sung (to use two completely different example of the same effect at work: Field Songs’ ‘Resurrection Song’ and Here Comes That Weird Chill’s ‘Skeletal History’).  All have the same pleasing effect on the eye and in the mind, making for a great read.

There are some omissions – the extras from the Has God Seen My Shadow? compilation are incomplete, if the One-offs and collaborations section was exhaustive it would take up a whole book on its own (although it does contain a song or two that has yet to be heard at all, ‘Skull, co-written with Gargoyle collaborator Rob Marshall standing out here) and there is only the tiniest mention of the Gutter Twins contained in the book’s prose.  Tiny quibbles though.

This is a book that is utterly essential to Mark Lanegan’s fans, this goes completely without saying.  It fills in little gaps of his musical history while creating more unanswered questions, and this is weirdly more satisfying than having the whole story parked in front of us.  What can’t be emphasised enough however is that this book is also utterly essential to anyone who’s heard the name somewhere or heard a snippet of his music on the air somewhere (front and centre in the American Gods TV series soundtrack for example) and who want to finally know what all the fuss is about.  Buy it for yourself and then lend it to others.  Just make sure you get it back afterwards.