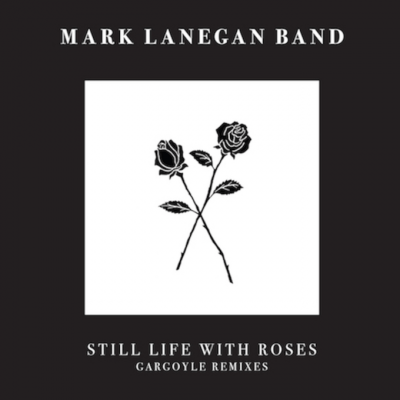 Mark Lanegan is no stranger to having people rework and remix his music these days.  After allowing friends, peers and assorted others free rein over (almost all of) his No Bells on Sunday / Phantom Radio experimental diptych, this month sees the release of Still Life With Roses, a shorter selection from his current band’s Gargoyle album, upon which Rob Marshall features heavily.  There’s also a more underground feel to this one, thanks to the assembly of a small band of remixers of varying legend.

It starts off relatively trad, with On-U Sounds’ Adrian Sherwood taking on ‘Nocturne’, not unsurprisingly, given the producer’s fortes, sounding both dubby and industrial at the same time, pulling the bass close to the front along with the electronic noises pushed further down in the original mix.  A breakdown about two thirds of the way through brings back more glorious Electrafixion memories, reminding me that McCulloch & Sergeant captured the 1995 zeitgeist better than history gave them credit for.  A huge Andrew Weatherall remix of ‘Beehive’ hoovers out much of the original music, retaining only Mark’s voice and – again – background guitar bits that previously sat below its forebear, adding a beat that gives the whole thing a bouncy affair.

Balancing this upbeat mood is the returning Pye Corner Audio’s interesting reworking of ‘Old Swan’.  As Lanegan himself says, this is his most positive song of date, so what Our Head Technician has done is strip all the natural light from it and replace it with neon and dread, making a bright jaunt through gratitude into something that would sit comfortably in John Carpenter’s high-watermark Prince of Darkness soundtrack as well as providing suitable creepy background for that film’s non-dream sequence.  The album’s original weirdest track, ‘Blue Blue Sea’ is made all the more weird thanks to Italian (via London) producer Alessio Natalizio, better known as Not Waving, stripping the song out entirely and creating something new and dystopian with the remains, akin to a reduced-BPM version of Pink Floyd’s ‘On the Run’ thanks to its slightly-familiar sequencer pattern.  Even Mark’s vocals are removed, the only voice that remains is the backing vocalof Shelley Brien.

Blood Music sees us out with an interpretation of ‘Death’s Head Tattoo’ that verges of the interestingly nightmarish; voice cut up and scattered minimally across a single-chord remnant of Marshall’s original music.  It’s by far the most discomforting track on the record, and certain to be the most divisive.  That said, it is something that fits perfectly in the collective ethos of both Gargoyle and this companion.

As with A Thousand Miles of Midnight to Phantom Radio and No Bells on Sunday, Still Life With Roses does feel like it’s a true part of its immediate family.  Perhaps more so in this case as the post-punk/gothic genesis for these tracks feel much more unified in their identity than Phantom Radio’s experiments, and the result is not unlike the second half of New Order’s Substance compilation where their journey from Joy Division’s grieving to True Faith’s celebration is cheerfully tinkered with. It’s a bit niche for sure, and the very premise of this sort of thing will seem a bit odd to anyone who listens to this and doesn’t pine for the olden days of actual 12” singles, but there’s nothing wrong at all with embracing the margins once in a while and this is as worthy an addition to Mark Lanegan’s extensive and eclectic canon as anything.