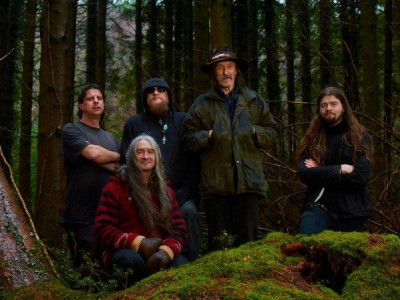 Hawkwind have never stopped progressing throughout their 48-year career. Their new album, Into The Woods, has been winning the band plaudits, and their live show has earned a reputation for being devastatingly heavy. The current line-up of Dave Brock (vocals and guitars), Richard Chadwick (drums), Mr Dibs (vocals), Magnus Martin (synths) and Haz Wheaton (bass) bring us up to speed in a revealing interview conducted prior to their headline appearance at the HRH Prog festival.

Dave: It’s a continuation from The Machine Stops, when he goes out onto the surface of the earth. Part of it is about that, and then there’s things like ‘Vegan Lunch’.

(((O))): The Machine Stops seemed to get a little more traction with the press and a lot of positive reviews. Is there a sense of resentment that people lost faith in you, prior to that record?

Haz: We weren’t rushed. From inception to completion this one took about four months.

(((O))): How are things with personnel in the band? Do you have a stable line-up? [As this question is asked, Magnus walks into the static caravan in which the interview is being conducted]

Dave: Magnus has just joined up with us here. He’s just arrived at the crucial moment.

Haz: This is his second gig with us tonight.

Dibs: This has been a really stable period for us; the last decade has been really stable. One or two people have dropped off and then come back on. Then the last year or so it’s fluxed again – people change roles or drop away. It was almost a revolving door in the 70s.

Haz: There have been a lot of members of this band. There has been lots of stable line-ups, though.

Dave: You can’t expect stability over 48 years. Basically our political alliances to animal charities, and Sea Shepherd and all the things we’ve been involved with, sometimes other members disagree with this stuff. Which being a dictator I say “fuck it, you’ve got to pay attention!” It’s the same with the entourage, we’re all about being vegan and some people are having cow’s milk. What’s going on in the world?!

Magnus: That’s actually how I got in the band. I was selling vegan cheese. They wanted to get a vegan hot dog and suddenly I was in Hawkwind!

(((O))): There have been a lot of different members in the band, many of whom are still performing – there are, if you like, different iterations of Hawkwind. You’re feelings towards Nik Turner are well documented, but what are your feelings about the spin-off band Hawklords, now that Nik’s not involved?

Dave: Well Bob [Calvert] and I actually formed the Hawklords back in 1978 and we just did that one album. Basically that was it, you know? It was probably Harvey [Bainbridge], cos Harvey was in the Hawklords back when we did it. When they started as the Hawklords they were basically doing cover versions of Hawkwind tunes as that’s the only way they could get an audience, until they started doing their own stuff. They have got talent within that band. They’ve basically got to write their own stuff and forge their own route, which is what they’ve done.

Dave: I’ve never given them my blessing, they just kept on doing what they’re doing, cos that’s their prerogative, not mine.

Dibs: We get on with what we’re doing.

Dave: We don’t bother with what the rest of them are doing, cos we are Hawkwind.

(((O))): What about your legacy? Is there a balancing act between keeping people happy who want to hear the classic material, whilst also forging ahead and doing new stuff?

Dibs: There will always be people who are stuck in the 70s, who wish every album is Space Ritual, but we can’t do that.

Dave: You can’t paint the same picture over and over again.

Dibs: It’s like a VHS tape that fades and fades the more you record over it. You become a shadow or a pastiche.

Haz: The older numbers we play change, not just every tour but every night: we change how we do them, depending on who’s in the line-up. It’s like with jazz records – you hear the same song, but played at a different time, and you can hear a totally different version of that song. Which is great, cos say you’re in the audience and you’re a fan of ‘Shot Down In The Night’, you’re going to hear that song, but the band plays it completely differently, you’re going to have the familiarity but without the boredom.

Dave: Magnus is going to do a wonderful solo tonight and it’ll be totally different!

Dave: Otherwise it becomes rather tedious – you become a bit robotic, don’t you, playing the same thing over? We don’t do the same thing. We do what you’d do in jazz, but in rock, where you have your verse chorus verse chorus and then your instrumentals. As long as you play nice melody lines, and people go off and can do their own bits. Magnus, you’re the newest one, that’s just come into this…

Magnus: There’s little motifs that we play, so it’s sort of the same but you follow it down different routes, don’t you?

Haz: The pressure is to push beyond, when you play for 10 shows in a row, and with all the jam parts you find a nice motif that you know works, you’ve got to not fall into the rut of just doing that again. It’s really difficult.

Magnus: When I first joined I just thought “I’ve got to nail this, just get it exactly right every time”. I started trying to do that and Dave started getting pissed-off saying, “stop doing it the same every time!”

(((O))): There seems to be a divide amongst your fan base – a light side and a dark side, if you will. Some people seem to get very different things from the band. Do you feel you’re misunderstood, as a band?

Haz: I think different people like different things, and that’s entirely their right to do so. You might really like heavy rock, so you might like half the Hawkwind albums, but not the lighter ones. Or vice versa – if you like really ambient and electronic stuff you might love the stuff from the early 90s but not the rest of it.

Magnus: In the old days, there’d be lots of bikers and then loads of fluffy hippies, and the bikers would scare the hippies.

Dave: You’ve got to remember that they’d all get stoned and take LSD together. Things don’t change, really – people still like getting really stoned and having a jolly fine old time. Of course we’ve got a good light show – the visuals are good as well, constantly making it into something really unusual.

Dibs: I think the media has misunderstood the band more than the fans. The light and dark side is just different interpretations of what Hawkwind are. The media haven’t got Hawkwind – some of them don’t know quite what to do with us. Space rock is a cover-all but you can’t really sort Hawkwind into a category. We talked about metalheads but there are also danceheads into Hawkwind, cos that repetitive beat is actually the dance beat.

(((O))): In the interview you’ve referenced a whole host of genres, from stoner to metal to psy-trance. But none of you have mentioned prog, yet here we are at a prog festival. What’s your relationship with the genre?

Dibs: That’s an easy one that Hawkwind get lumped into, cos it is kinda space rock or psychedelic music. Hawkwind is truly progressive. It’s not prog in the sense of Curved Air or Yes, because every album is a progression from the last one: always different, yet always Hawkwind. It’s had that signature, mostly cos it’s always Dave, but the way it sounds – in the early days you had Dik Mik and DD [Del Dettmar] created that wall of electronic noise.

Hawkwind end by enquiring about Gong, who headlined the festival the previous evening. They’re pleased to hear the band got a great reception and are still going strong – it’s clear that both Dave and Dibs (who knows Gong’s bassist Dave Sturt) have a real affinity for their fellow cosmonauts.

Hawkwind boast a winning blend of youth and experience in their ranks. With their best-produced and most diverse album for many years following up a fully realised concept piece, it’s well worth catching them live – this machine shows no signs of slowing down, let alone stopping.