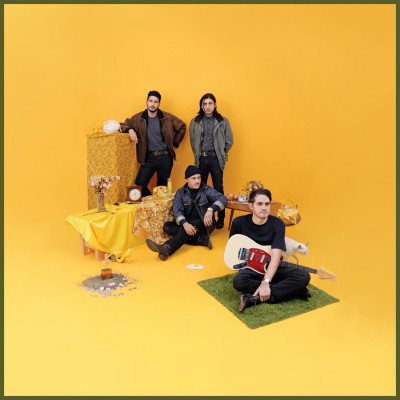 Bulls and Roosters by Together PANGEA

Together PANGEA are a foursome of garage punk rockers keen to party hard and extend the fun beyond their loyal Los Angeles community. They cruise back to us after a couple of years out, involving highs and lows, with their fourth full studio release Bulls and Roosters. First impressions indicate that the band is being more thoughtful and less in the listener’s face with their newest record. Despite the band’s progression since their previous release ‘Badillac’, I think that to say their sound is maturing would be incorrect because that’s not what their music aims to be. I do however think Together PANGEA are a lot more self-aware in their declarations of youth and test the West Coast waters with a nice line between rawness and a more slick pop-like sound.

The opening song ‘Sippy Cup’ sets the tone well for the album with a comedic outlook on youth drooled over an energetic beat. ‘The Cold’ slows the pace down with some melodic realisations about lifestyle that build up nicely to more bratty outbursts. I think the band’s Nineties alt rock influences shine through strongly on this record whether it’s the touch of Placebo on the track ‘Friend of Nothing’ or the Weezer twang throughout, this definitely adds interest and comfortableness to their sound. It’s also interesting to note the country influence on ‘Gold Moon’ which shows further depth in palette.

Another first for Together PANGEA is realised on this album with bassist Danny Bengston contributing more vocals as well as writing ‘Kenmore Ave.’, ‘Southern Comfort’ and ‘Alison’. I think it is a nice insight to get into the band a bit deeper where the songs tend to be personal and story based.

The first single to drop from the album ‘Better Find Out’ paws up some dust with a ground tearing riff. It times in at just less than two minutes, throwing the listener around with an attack on the drums and surfy guitars while lead William Keegan shrieks to the audience about life on the road. Lyrically this is an interestingly honest song as it dismisses the normal slacker brattiness that all too often becomes overpowering on records from their contemporaries as Keegan shouts “Better find out for yourself”, a well needed reality check against people who embrace a non-constructive ethos.

I think ‘Bulls and Roosters’ as a project has definitely changed my expectations of Together PANGEA, proving they are capable of reaching outside of the endless party and producing an equally enjoyable rock and roll record that leaves a longer impression on the listener. I think they have managed to do something new with the instrumentation on this album applying more open sections without vocals rampaging over the top. The band shows interest in future releases moving away from heavier rawer projects and into them finding their style as a fun loving group with an honest sound to complement their sun soaked lifestyles. I don’t think anyone can dispute their towel being on a lounger around the garage rock scene for a while longer.