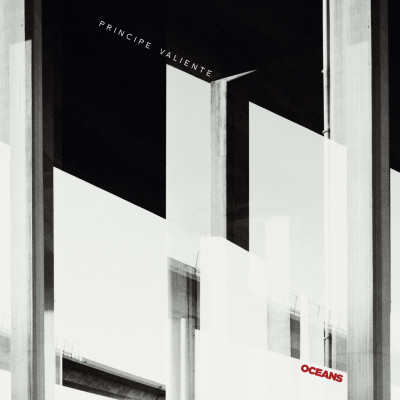 Principe Valiente is a band I’ve heard of, but have not really listened in depth until this release. So I must profess to general ignorance, and too bad, because this Swedish post punk by way of shoegaze and a dash of goth have released an excellent new record. Oceans was partly recorded by the producer Martin Ehrencrona (Les Big Byrd), and partly in various basements and art school lobbies around Stockholm.

Led by the wine dark, dramatic vocals of bassist Fernando Honorato, they manage to wear their influences proudly on their sleeves (Cocteau Twins, Cure) but still create their own musical vision. The music is expansive and the production sounds massive, like it was created in a vast chasm. I adore the rubbery bass lines, at times sounding much like The Cure’s Simon Gallup, which is a high compliment. Fernando also emotes in the same registers as Tom Smith from The Editors, so that is another touchpoint. “Wildest Flowers’ is a great opener, and it has a symphonic backdrop that works well as part of the arrangement. Guitarist Jimmy Ottosson often plays in a loping style reminiscent of The Edge, which perfectly complements this music.

The single ‘Strangers In the Night’ is strikingly similar to The Cure at their best, yet it’s not derivative. It is another favorite of mine, and you might find yourself playing it on repeat like I have. It is dense and it is delicate, icy musical layers are frosty yet gorgeous as they work their magic on you. Even as the darkness swirls around you, glimmers of light dance just out of reach. I also really like ‘Untouchable’ and the way it unfurls slowly, starting from a solemn place and gradually filling with sound and joy! ‘No Time’ is another standout track, and I adore the deep, thrumming bass lines and the dark, malevolent twisting of the guitar knotting around the main melody. And yet, it opens up to a strong, upbeat chorus despite the inky atmosphere that surrounds it.

I also love Rebecka Johansson’s secondary vocals (or if not her, an uncredited female vocalist) on this track. Nice! ‘The Reason Why’ reminds me of Back Room era Editors, and it too has many gauzy layers, meshing light and dark in a marvelous sonic maelstrom. And finally, the seven minute plus ‘Monsters of the Sea’ is a dark parade that enchants as it winds its way to the final note. Highly recommended for all fans of the aforementioned bands, existing fans of Principe Valiente, and anyone who enjoys their dream pop meshed with darker elements.