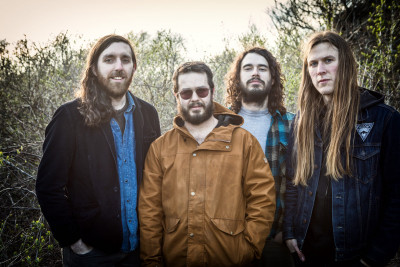 A lot of people think we're a band that writes things by jamming or something, which is really not the case at all. It is very much like an isolated thing where everyone is apart from each other.

A couple of weeks ago Elder played in Edinburgh again, to promote their latest album Reflections Of A Floating World. Sander van den Driesche caught up with frontman, guitarist and singer Nick DiSalvo and asked him about the tour, their new 4th member and how to categorise the band’s current sound.

Nick: It’s been really good. It’s been awesome. It’s been our most successful tour so far, the largest crowds, the most receptive audiences. People are really into the new record and that shows, because a lot of them are actually stoked to hear it live. And we’re touring for the first time with our 4th member [Michael Risberg], so there’s been a lot more excitment. People who have seen us before will come out and they’re really curious to see how it translates to a 4-piece scenario.

(((o))): So you’re mainly playing new stuff on this tour then I assume?

Nick: We’re playing a lot of new stuff. Depending on how long we can play, we play the whole record almost, like front to back, plus some other, older stuff. But any focus on the last two records for sure.

Nick: Yes, the bigger task in the future would be trying to work him into the older material, which was kinda written for one guitar opposed to two.

Nick: This is his first tour ever, and he’s doing really well. We’re all really stoked on it, but everyone needs to evaluate the tour at the end and see if he wants to be part of the band. I guess we’re kinda keeping things open ended. It’s a big commitment to be a full-time musician, it’s not that easy to drop everything and just shift into things like touring. We’d love it to work out, but everyone just has to be honest with themselves and make sure that they really want it at the end of the tour.

(((o))): Was he involved in the recording of Reflections?

Nick: He was. But very minimally, more like on an improvisational scale. He came in to do some jam recordings with us that made it on to the album. On the track ‘Sonntag’ he’s playing keyboards on that, and he played some other guitar tracks on some of the other songs.

(((o))): But you mainly wrote the guitar pieces for the album?

Nick: Yeah I’d say I recorded 95% of all the guitars on the album.

(((o))): You know Michael from another project you’re involved in, right?

Nick: Yes. We had a project called Gold and Silver and we recorded one record and released it, but we never really had the time to do anything else.So that’s kinda why that fizzled out. But he’s the only other musician I’ve ever really like worked with. Like that intensely that something productive came out of it.

(((o))): One thing I’ve always thought about when it comes to Elder is the logistics of things as you’re based in Berlin, but your band is based overseas. How does that work out? How often do you come together as a band?

Nick: Leading up to Reflections basically I wrote all the music. I did that for Lore too. Dead Roots Stirring was the record where we had the most collaboration and the most jamming. Because for the past 10 years I spent 5 of those now in Germany for different reasons. So we just come to learn to work on a distance. We also lived together in the exact same house, which had a practice space like 5 minutes down the road. So we had everything. The way we work now is that I write most of the ideas and I send them back for revision and then when it makes sense and when there’s a tour come back a week or two beforehand and just practice a lot. Somehow it works. A lot of people think we’re a band that writes things by jamming or something, which is really not the case at all. It is very much like an isolated thing where everyone is apart from each other.

(((o))): So when you’re on tour it also means you get to hang out with your mates all the time, which must be great?

Nick: We do spend a lot of time together. A couple of month ago we didn’t see each other at all and then there’s a month where we’re all living together. Bascially in a van, which also gets really intense. And then we get all the time in the world to jam out the nunaces of stuff. We’d probably be a different band if we were all in the same country, but I’m not sure but it always seems to increase productivity when we’re apart. Because I spend a lot of time just sitting writing music and as opposed to when we meet and go to the jam space, where we might jam for 5 hours and one thing might come out of it and we’re all drinking and smoking and having a good time. Unfortunately that’s always how we’ve been in a practice space.

(((o))): I know you work for Sitckman Records, but what do the other guys do when they’re not in the band?

Nick: Everyone’s got their own thing they’re doing, which is always kinda changing. You pick up odd jobs wherever you can. Our bassist Jack was working as a plumber for a while, but he’s moving back to New York City in a couple of months, so we’ll see what he’s doing. He also does film and television set sound, so it’s weird how he got incolved in plumbing after a while. Matt works on a farm sometimes, and then he works other odd jobs. Everyone got their other gig, it’s kinda just keep your sanity too, you know?

(((o))): Talking about the new record, which has been received extremely well. You must be very pleased. Does it reflect in the number of people showing up at gigs since the album was released?

Nick: Yes! Definitely, absolutely. We noticed some kind of jump like that when we’d released Lore, you know all of a sudden the gigs are getting a little bit bigger. But now there’s a 100 more people coming per night or something  in venues where we’ve played tons of times. We’re selling out now!

(((o))): Some people still want Elder to go back to the stoner rock kinda stuff you used to play, even though you’ve completely evolved away from that early sound. Would you ever come back and do some of the old stuff again?

Nick: Just straight up stoner rock? No, not at all. Honestly, that stuff like hurts my head. I spent my whole youth listening to this kinda music and playing it. There are some old crowd pleasers that we throw in every now and then. Even stuff like Dead Roots Stirring, which we wrote 7 years ago, it’s just not really interesting to me anymore. It’s not challenging. I think the older records are pretty solid records, but we’ve definitely moved on and broadened our musical horizon. It’s a little bit boring to play that kinda music now.

(((o))): Do you think all your old fans will agree? And do you think you pick up a lot of new fans with the newer sounding stuff?

Nick: It’s a mixed bag. I mean now we’re like outside of the pure stoner circle there’s still lot of people who identify with that scene and listen to us. Sometimes we get people commenting they’re really unhappy with the new stuff or hate it, because they think there’s no riffs anymore, which just isn’t true! It is a really idiotic statement which I read often. But it doesn’t matter as there are plenty of people out there who like it, and many of our fans follow us wherever we go.

(((o))): I still see people labelling you as a stoner band for some reason.

Nick: It’s weird. I think it’s easier in 2017 to slap that tag on a band, without actually thinking about it and engage with their music.

Nick: Yeah, it’s definitely moving into that direction. There’s elements of all of that. I mean I wouldn’t say there’s no riffs that couldn’t be construed as doom or something. But it all depends on how nerdy you want to get about it.

(((o))): So when you write a record like Reflections, do you have particular influences you’re hearing and want to incorporate those in your music as well? Like what are your main influences?

Nick: I would almost say none at all. That’s a really weird answer I always give, because when I’m writing it very rarely happens to me that I listen to a record and I’m so inspired by that sound that I want to write something that sounds like it. But when I’m doing all the songwriting I almost try to not listen to music at all and just kinda pull it all out from you know what do I think is interesting. You know I sit down and play guitar for hours a day, and I try to play keyboard and I try to conceptualise the kind of sound that I want us to have or you know that we want ourselves to have. There are players that I find inspiring, like Bo Hansson, the old Swedish Hammond organ player, or like of course Jimi Hendrix. I can go on for days listening to all the players and bands that I love, and they probably colour me subconsciously. But I do try to write music with an open mind and not really think about anything particular.

(((o))): I’m a big Motorpsycho fan and to me your musical development with Elder is almost a very similar musical journey as theirs. They started off as a more heavy metal, grunge kinda band and they evolved releasing records that to me are complete prog. You never really know what to expect when they release a new album and fans have their favourite records by them and ones they don’t like or get at all.

(((o))): Just as a sidenote, one of my ideal tour line-ups would probably be Elder and Motorpsycho. Would something like that ever happen you think?

Nick: I think it could happen. Without saying anything more about it. 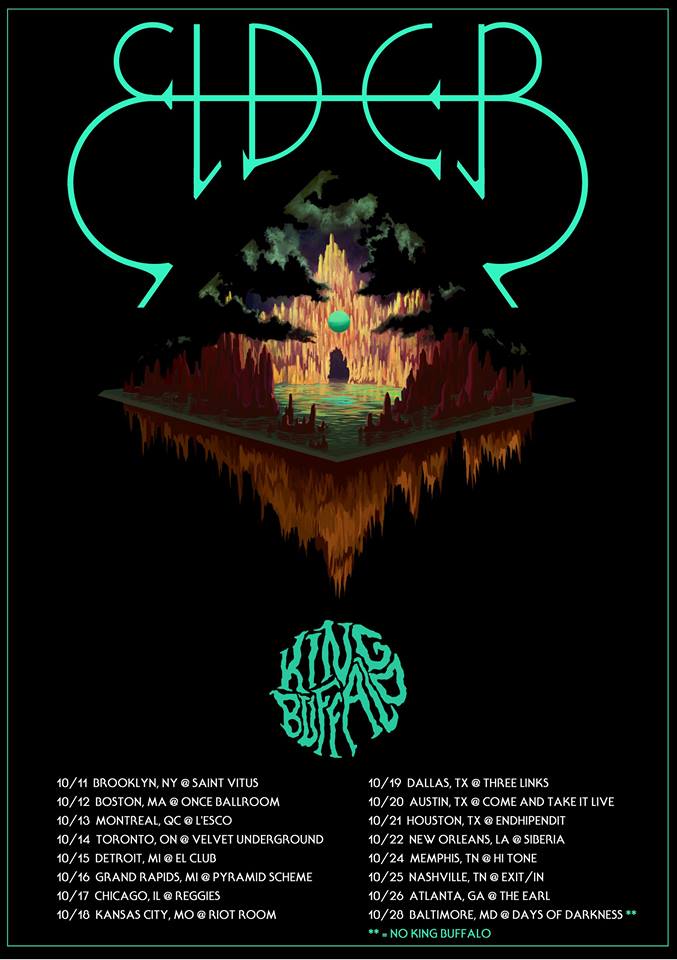