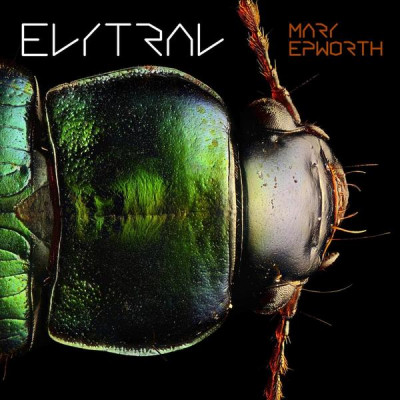 As a sweeping generalisation, I don’t usually picture electronica as being particularly “external”.  Not being disparaging there, it’s just that I tend to picture the proponents of this artform to generally do their thing late at night in enclosed spaces ,at least where there’s a plug socket handy.  And anyway, it’s not easy to quixotically decide to drag a Big Moog outside for a bit of a noodle under a tree on a lovely day, much as I’d love to see that.  Mary Epworth, with her 2nd LP Elytral, gets closer than most to evoking and enhancing an outdoorsy joy from a most indoorsy medium.

It’s quite a challenging start to the record; opener ‘Gone Rough’ distorts and overdrives everything in its minimal reach before an initially calm ‘Last Night’ startles the listener into submission with a second half of sudden Floyd/progressive/jazz terror that stops just as abruptly as it starts.  After that, it’s a record that becomes more comfortable and welcoming as it goes on, so that by the time it all finishes, the whole makes such sense that returning to these initial surprises becomes its own delight.

Immediately following on from this strange introduction is ‘Me Swimming’, six minutes of stripped-down electronic pop beauty which sets the spiritual and atmospheric tone of Elytral as a complete piece.  From there on in, it’s a heady experience created from a careful selection of the finest parts of very little indeed and Mary’s voice, an instrument in itself and subject to the same distortions, trills and treatments as everything else on here, making this most human aspect another essential part of Elytral’s entire model.

There’s a foot in two places for the most part of the record, as the very electronic presentation remains very old and weathered at heart: ‘Bring Me the Fever’ has the same quirky heart as the FLK for example, while beautifully-positive closer ‘Surprise Yourself’ comes across as coming from the same modal otherworld as Belbury Poly.  There’s bits and bobs of other things floating about elsewhere if your brain is so inclined (which it probably would be by this point) as well, ‘Turned it Down’ has a sort of pared-back Unkle vibe about its ecstatic stomp, ‘Lost Everything’s reflective tone slightly recalls the Smoke Fairies’ surprising last album and the whole thing taken in one go can feel like someone’s connected Robin Hardy’s Wicker Man to the National Grid without first asking permission.

Ultimately, Elytral is a fantastic exploration of the joys of just being outside; looking upwards and around, taking in the sensual and channelling it through a unique and interested mind.  It’ll probably grab you in ways that you weren’t expecting, but it’s worth just diving in and letting Mary open your mind up to this rather unique experience.