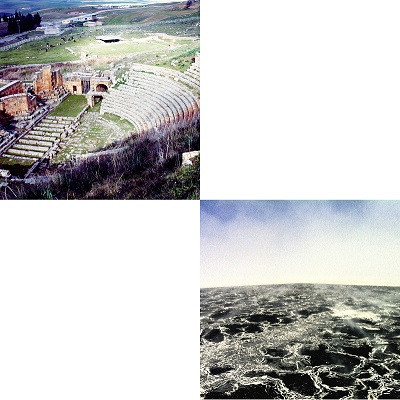 It is perhaps a measure of how slowly I write stuff these days that I find myself reviewing two recent albums at the same time by the same composer (with a 10-minute DeBussy tribute inbetween).  Australian composer Ellis Cage is being rather prolific of late, having already chimed up with the beautiful Vinculum at the start of this year and, just as 2017 passes its halfway point, here we are with White Sands Harbor, 1984 and Synaxis, released a mere two and a bit weeks apart.

Interest was initially piqued in White Sands Harbor, 1984 when a bit of research into the curious track titles revealed a thread that appeals to me immensely.  A quick look on the internet at the title track reveals White Sands Harbour to be a NASA test site and, more pertinently, a runway for their Space Shuttle project.  A further clue comes later in the album with the track ‘Transoceanic Abort Landing’ which reveals most of the other names here are the names and locations of runways where the Space Shuttle would come to land in the event of an aborted lift-off.  Nice.

For an album concerned with the trauma and drama of such an event, it’s incredibly calm.  ‘The Stars are Your Guardians in the Silence’ even goes beyond this to become almost playful, with electronic bleeps and beats twinkling happily over a more conventional set of chords than features elsewhere here.  For the rest, it’s Cage working solo with restrained guitar over carefully-constructed soundscapes that occasionally evoke the openings to Pink Floyd’s Wish You Were Here or perhaps Eric Clapton’s Edge of Darkness set (the later especially on the aforementioned ‘Transoceanic Abort Landing’, the former during the title track), distorted and rebuilt over the passage of a couple of decades and several hundreds of thousands of miles.

Synaxis, on the other hand, is a little less simple to grasp concept-wise.  Seemingly named after Eastern Orthodox Christian liturgies, it’s a bit more esoteric at face value.  Musically, the guitar is replaced by orchestra which gives this record an older sound, although it’s still far from conventional as opener ‘Simeon’ electronically treats a couple of piano notes to an almost unrecognisable degree, and ‘Remesiana’ which follows uses first the very bottom and then the very top ends of a string section as if they were tectonic plates, sliding over each other patiently to the point of almost timelessness.

The strings used create a very different atmosphere to Sinaxis’ predecessor – strangely, the short bursts of orchestration here compare to White Sands Harbour’s constant drones make this a paradoxically lonelier-sounding record than the previous solo work, although it does share many common traits – not least its overall calmness and the feeling that time is being pleasantly stretched in order to accommodate these sounds.

Picking on individual tracks as favourites on either record is largely unfair as they both work at their best when taken as a complete, whole work.  They are both markedly different to each other thanks to their instrumentation and subject matter, but even the two themes of science and religion don’t keep White Sands Harbour, 1984 and Synaxis far apart in the universe that Ellis Cage has created.  These are both records that don’t immediately force their way into your head and stay there; instead they tend to spend the first few plays sat somewhere around the subconscious until after a while, it’s as though they’ve always been there.  Both are definite recommendations for anyone with half an hour each to spare to allow something to simply and delightfully wash over and slowly sink in.