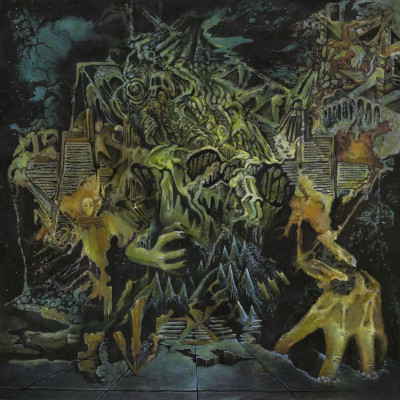 Murder of the Universe by King Gizzard & the Lizard Wizard

King Gizzard and The Lizard Wizard continue to ride their wave of creativity by dropping Murder of the Universe, the second of five albums to be released this year. The most recent serving of psychedelic rock comes from a darker corner of the ‘Gizzverse’, a fitting progression from the previous records thematically speaking. Murder of the Universe whizzes over three alternative narratives, starting with the transformation of a demonic beast, continuing onto a showdown between ‘The Lord of Lightning’ and ‘The Balrog’ and finishing with a sci-fi dystopian-infused destruction of the universe.

‘A New World’ opens the door to this album with label mate Leah Senior’s spoken word verses beckoning the listener over the peak into the hellish landscape which lies below. The narrative is mixed cuttingly alongside lead Stu Mackenzie’s vocals and provides different layers where it can exist both above and within the instrumentation. The passages continue and add to the prolonged variation of momentum over this section of the record, acting as an echo chamber for the cycle of the transformation and eventual demise of ‘The Altered Beast’.

The second section of the album brings back some reminiscent sounds from ‘Nonagon Infinity’ accompanied by references that add new confidence and balance. King Gizzard make it crystal clear that they embrace age old fantasy elements intertwined with their heavy rock influences such as Led Zeppelin. It’s also impossible to ignore the influence of Hawkwind’s ‘Space Ritual’ on the album especially in relation to use of instruments and on song titles.

The project jumps even further off the wall in the final stretch of the album as a robot character that yearns to feel death and to vomit is conjured up. This section is memorable not only for its heavy onslaught of noise and deeply sunk itching hook on ‘Digital Black’ but also for the hilariously gruesome text to speech narrative of the robot’s death.