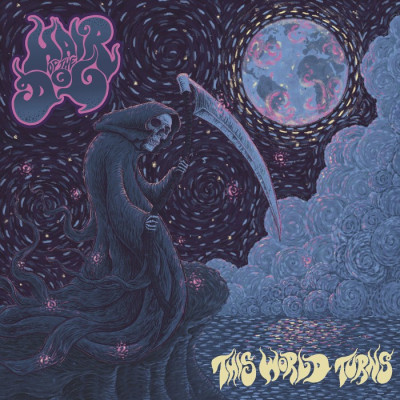 This World Turns by Hair Of The Dog

During the 90’s and into the 2000’s one of the major discussion points within the heavy rock fraternity surrounded the perceived lack of UK bands. Whilst that may have rang true from an industry perspective, it would have been difficult to really ascertain due to the lack of any kind of network. Obviously now, we have a much more open system of not just social media and blogs, but also the ability to market the music for yourself. That perceived lack of UK heavy rock bands suddenly opened up to a whole new world when Bandcamp et al. came on the scene. Now there are umpteen bands, although arguably the industry may still perceive there to be a lack, but that’s their mistake now.

One band who have slowly been making waves on what amounts to an underground scene have been Hair Of The Dog, a Scottish rock trio, who have now reached the heady heights of that difficult third album. Honing their skills through numerous sweaty gigs, probably playing just for petrol and beer as is the sad state of rock and roll these days, their third album, This World Turns, finds themselves at a rather confident peak. Road-tested and bled over, the album amounts to nothing more than a clarion call of triumph. Still looking for that great UK rock band? Look no further.

Previous album, The Siren’s Song certainly hinted at the exciting possibilities ahead, but nothing quite prepares you for the full on NWOBHM attack of opening track ‘This World Turns’. A standard riff fest, fronted by the soulful vocals of Adam Holt, it soon develops into an extended rolling riff, taking in a whole ten minutes. It’s a full on revival of the early sound of British metal, taking its cue from the galloping riffs of Iron Maiden. Melodic but heavy, it hints at an aim for world domination.

‘Keeping Watch Over The Night’ is a classic rocker laid claim to by the thudding bass of Iain Thompson, and more than matched by Jonathan Holt on drums. It’s a tight rhythm section, unfussy but always ready to throw in a few neat flourishes as the yearning vocals guide you ever on. What really stands out is the expansiveness of the sound though, with a production which belies it’s underground roots for something a lot more universal.

After all that feel for something long gone, ‘Ctrl-Alt-Delete’ brings a more modern edge, albeit in name only. That said, there is a certain hint of another Scottish rock band about it as its gnarly riff pervades that classic rock style. It works well as a way of adding depth to the album although it does tend to stick out a bit from the previous two tracks. That feeling is soon put to rest with ‘The Colours In Her Skin’ whose harmonic guitar chime turns into one of those excellent riffs which simply begs to be head-banged to. There’s a distinct loose feel about it too which stems from the bluesy vocals, giving an added dimension again.

‘In Death’s Hands’ slows the pace somewhat as the riffs take a break for a more subdued sound. This soon expands deliciously as orchestral synths open the song out on to a different level. Used sparingly, they accentuate rather than become over-bearing, providing a rather classical edge to the bands music. It’s a brave move but an important one and really highlights the confidence in the band. This carries on into the quiet opening of final track ‘4AM’ with its semi-talked vocals against a backdrop of pouring rain bringing to mind the more twee aspects of Scottish indie. This soon comes to a stop with a gigantic guitar sound whilst the drums and bass keep the whole thing ticking along. It’s spacious but huge, and devastating to listen to as once again those wonderfully passionate vocals lead us on. By the time the guitar solo comes in you’re fully in their grasp.

Whilst the industry will no doubt dither and perhaps continue to moan the lack of decent rock bands in the UK, Hair Of The Dog have proved with This World Turns that there is still life in the old “dog” yet. There is a sense that the band have finally arrived on this album, and through its fiery riffs, soulful vocals, and belief, you can sense a band ready to make that leap into the big time. Whether that happens depends on luck these days, and if it doesn’t then the music world has missed out on something special. This music deserves to be heard by a wider audience, and Hair Of The Dog should be looking at main stage slots for all major rock festivals. This World Turns feels like it holds the key to this, let’s hope lady luck shines down. Regardless of that outcome, what we have is a minor masterpiece and one of the great heavy rock albums from a UK act for quite some time.