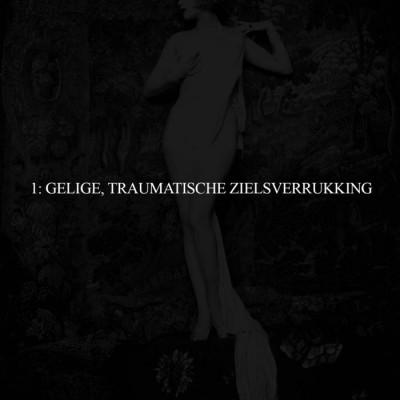 Let me start by gently pointing out that Grey Aura is not a band to take the easy way anywhere. Their new release, titled 1: Gelige, traumatische zielsverrukking is a bit hard to translate to English, so I’ll just not bother. It’s been three years since the band dropped their full length and the complexity of this project seems to be even bigger than before.

So let me try to ease you into this. Band member Ruben Wijlacker is writing a novel, which will be titled De Protodood in Zwarte Haren (The Proto-dead in Black Hair). This record is the first of four that will make up the full length to accompany this. The story that will be written is steeped in the artistic nihilism of the early 20th century. Key names are Malevich, De Stijl and a search for spirituality. This record deals with the first chapter of that novel for which you’ll have to wait a bit longer. Let’s suffice that it features a journey to the Toledo Cathedral to witness the work by El Greco there, during the journey of the protagonist to his hometown in Spain.

Falu de Cádiz is an actual flamenco singer, living in the Netherlands, and his voice opens the record. It sounds broken and frail, but with an internal force of storytelling. This introduces the song ‘Martinete’ to the listener. A whirling sound wave, with the drums hidden under a gale of sound. Grey Aura is trying to move away from any sort of comfort zone with their unorthodox sound, trying to blend in storytelling, jazz and… yes, flamenco by guitarist Tjebbe Broek. Now, before you think that this is something way out there, just let yourself be swept away by this band with dazzling bursts of music, but also eerie silences where it all dwindles down. There is no easy listening on this record, not simply riding the static guitar waves. This is hard work, but with a peculiar beauty to it on ‘Rookslierten, flessen’.

And yes, it gets uncomfortable really fast on this first release, when you suddenly find yourself listening to Spanish speaking for a moment and then again being dragged along into the next section of the story on ‘Het Schuimspoor van de Ramp’. A strange, dark dance rhythm progresses at the end of the song. It has something carnavalesque to it, something dark and foreboding. Here the band reminds me a little of Vulture Industries in their eclectic uniqueness. We follow the story on ‘Dialoog & Improvisatie: Ontmoeting met het roofdier’. Droning guitar tones sound, when a dialogue starts in Spanish, between the traveller and a lady. From there on the music becomes dense, slow and heavy. Gradually the sound builds up to a highly atmospheric bit of black metal with a raw and unadorned feel to it. This tune is pretty much the highlight of the album and shows Grey Aura on their best with a track that is just a bit of the beaten path, blending postrock-y atmosphere with black metal ferocity.

But then we get to ‘El Greco in Toledo’, a tribute to the artist El Greco who is also in the long list of inspiring artists for this record. The climactic song takes up a galloping pace and hears the vocalists roaring and puffing out their chests in grandiose finality. The sound is big, it really conveys a bit of that Spanish pride. The guitars feel like a grand gesture and the shouted vocals are an act of defiance, truly here is where the band shines at the end of their story. There’s a nice bit of flamenco outro after that.

I’m pretty sure that some listeners will find this record, including the whole backstory, to be a tad bit pretentious. Truth be told, this project does seem to be quite something special and I’m curious how this band will manage to pull it off. Still, if you listen to the music alone then there is plenty to be found and enjoyed in there without you needing to have an arts degree. Just let the flow of sound take you away.