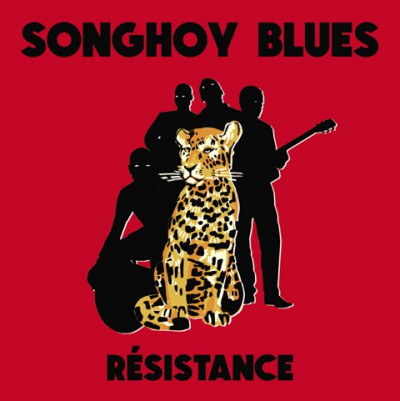 Songhoy Blues are a desert punk / blues music group from Timbuktu, formed in Bamako after they were forced to leave their homes during the civil conflict and the imposition of Sharia Law. After their debut Music in Exile told the story of the problems faced by the people of Mali with an undefeatable sense of enthusiasm and ungovernable joy, Résistance is more universal in tone and emanates the boldness of a band with more time and tools at their disposal – and the results are nothing short of astounding! If their music were a square peg, then happiness would be the square hole into which it perfectly fits.

‘Voter’ starts off with the vibrancy and audio flavour that our aural taste buds are accustomed to from these musical chefs, but after a minute in, a right hook of a riff hits you in the face like a sonic boom, and thus begins the stretching of the facial muscles and release of chemicals in the brain that will leave a permanent smile throughout this album and the many playthroughs thereafter. This is a release of confidence in their craft, and as you’ll discover too – each individual track has its own distinct personality and reason to draw out all of the feelings like an emotional magnet.

‘Bamako’ follows on, adding some funk spice to the mix and is the first single to be taken from the album – a celebration of nightlife in it’s vicinity. A translation of the lyrics in their native tongue reads “It is the rendezvous of the people at the crossroads of joy. Northerners and Southerners are bursting along the same trail”. Something that has stuck in my head as a permanent brain tattoo, that music can break down the walls built upon language barriers and terrible situations to bring people together the world over. Having witnessed thousands of people from all walks of life being captivated and hypnotised by their live performances, I simply cannot wait to see these new songs performed live. It’s something that everyone should do at least once in their lives, unlimited audio ecstasy that will have you floating for days.

The whole album is perfectly paced, with varying tempos and moods flowing through your veins with ease and carrying with them a warmth which is uplifting and inspiring. Iggy Pop and Elf Kid feature on tracks ‘Sahara and ‘Mali Nord’, respectively with their own take on the subject matter, but the real guest stars of the show feature on the closing track ‘One Colour’ – a children’s choir that join vocalist Aliou Touré in one of the most moving moments I’ve witnessed in music. In unison, they sing “together, we can”, three simple words sung with gusto and pride of a background that has brought them to where they are today. And it’s no disrespect to the other additions of the more well-known artists and legends featured, but this particular song had this particular writer crying tears of joy, a beacon of hope in hard times faced by people all over the world.

Join the resistance, you won’t regret it!